Flashback: The Exorcist and its sequels and prequels

Flashback: The Exorcist and its sequels and prequels December 26, 2013 Peter T. Chattaway 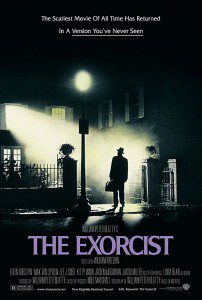 At least they waited until the day after Christmas to release the film.

It was 40 years ago today that a movie called The Exorcist came out in theatres and proceeded to shock its way to box-office success. But the film did more than jolt people with its images of outrageous demonic behaviour; it also subverted the assumptions of modernity by suggesting that there was more to us than science and psychology could understand, and in its own roundabout way, the film became an expression of faith (certainly on the part of its screenwriter, William Peter Blatty, though his particular brand of faith might not be exactly conventional or orthodox).

To mark the anniversary of the film’s release, I have re-posted my reviews of the original film and its prequels, and I have compiled a few links to other blog posts that I have written about the film. Check ’em out below the jump.

The original film was re-released with extra footage in September 2000, so in anticipation of that re-release, I wrote this article for the monthly BC Christian News, and then I wrote this review of the film for the Vancouver Courier.

I never wrote any formal reviews of the sequels, but I did post some notes on the first three films to the Arts & Faith message board in 2004. You can read my comparison of the original film and the novel that inspired it here, my comments on Exorcist II: The Heretic (1977) here, and my comments on The Exorcist III (1990) here.

I have also written a few blog posts that touch on aspects of these films I didn’t get around to mentioning in my reviews.

First, in May 2005, noting that Dominion: Prequel to The Exorcist was coming out on the same weekend as Star Wars: Episode III: Revenge of the Sith, and that both films were prequels to popular 1970s films that affirmed some sort of spiritual sensibility in the face of modernity, I compared and contrasted the two franchises.

Second, in December 2006, I got a kick out of the fact that director William Friedkin, in his director’s commentary to the 1998 DVD edition of The Exorcist, talked about how he avoided the temptation to “pump up” some of the spooky scenes — and then he went ahead and pumped them up anyway in the 2000 re-release!

And finally, during a ‘Close-Up Blog-a-thon’ in October 2007, I was intrigued by another blogger’s suggestion that some of the subliminal demon-face shots in The Exorcist may have been inspired by Ingmar Bergman’s Persona (1966).

December 26, 2013 Exorcists and Emperors: young actors play old, then play young again in flashbacks or prequels
Recent Comments
0 | Leave a Comment
"This was a refreshing read. I'm an average fan of Hellboy but I'm also a ..."
Andrew Mathews Doug Jones on Hellboy and Christianity.
"Great interview! One thing I've wondered since watching Season 1 is why they didn't include ..."
A.J. Cattapan Interview: The Chosen writer-director Dallas Jenkins ..."
"Earth actually does exist in the Dark City universe. Early in the film when John ..."
Edward Clint Dark City and the ambiguous ending.
"I don't always agree with your opinions, but your reviews are never less than interesting ..."
Laura-Lee Rahn The top-grossing Italian movie of 2019: ..."
Browse Our Archives
get the latest from
FilmChat
Sign up for our newsletter
POPULAR AT PATHEOS Entertainment
1