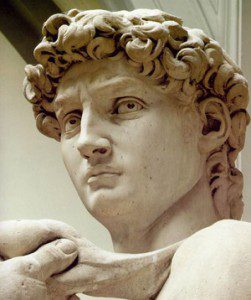 Not too long ago, I remarked on Facebook that my kids and I had been reading The Picture Bible together, and that our journey through the end of King Saul’s reign and the beginning of King David’s was making me wonder if I should go looking for a children’s-storybook version of The Godfather. All the murderous double-crosses and betrayals committed by the generals serving both royal houses, along with David’s warning that his nephew Joab would be punished by David’s son after David’s death, had the feel of a mafia-based soap opera, or so I thought.

Apparently I’m not the only one who sees some similarities between the two stories, or genres. The Hollywood Reporter says Mark Canton, producer of 300 (2006) and its upcoming sequel, is developing a TV series called King David and billing it as a “mafia show in biblical clothing”.

The Reporter also gives us this one-sentence summary of the series:

King David pulls the Biblical hero out of scripture and brings the contradictory warrior-king and patriarch into a character who must make monstrous choices that betray his personal ideals and turn his family against him.

I’m not entirely sure how to interpret that sentence, myself. While the biblical David did do some things that would strike the modern viewer as somewhat monstrous, such as his semi-genocidal slaughter of the Moabites, the conflicts within his family are generally depicted in the Bible as something initiated by the other family members, and not as a reaction to “monstrous choices” made by David himself.

In any case, it will be interesting to see what comes of this. There have been a number of David-themed TV-movies over the last few decades, but this is only the second ongoing series that I can think of to be based on the character — and the other one, the short-lived series Kings (2009), was set in a modernized context and so didn’t quite have the “biblical” feel that it sounds like this new series will have.

December 4, 2013
Noah -- new photos and a spoiler-ish blueprint of the Ark
Next Post

December 17, 2013 Bible epics are back on the silver screen
Recent Comments
2 Comments | Leave a Comment
Browse Our Archives
get the latest from
FilmChat
Sign up for our newsletter
POPULAR AT PATHEOS Entertainment
1