The Bible sequel A.D. gets the green light for spring 2015 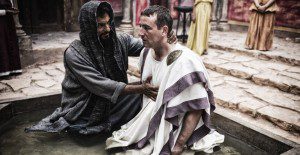 I was just finishing my last post, which partly concerned Mark Burnett and Roma Downey’s recent decision to produce a mini-series about the siege of Masada for CBS, when word came over the internet that NBC had greenlit one of their other projects: a 12-hour sequel to The Bible that was once called A.D.: Beyond the Bible but now simply goes by the name A.D.

I included a brief link to that press release in my previous post, but I think it merits a blog post all its own, since it includes a few new details about the mini-series.

For one thing, the mini-series now has a tentative airdate: sometime in the spring of 2015. That would be almost exactly 30 years after NBC first aired another 12-hour mini-series called A.D. It would also mean that both of the first-century-Palestinian-history shows that Burnett and Downey are currently producing would be due to air on their respective networks sometime within the same calendar year.

Second, the mini-series will apparently overlap with the events of The Bible more than I thought. The press release quotes NBC Entertainment president Jennifer Salke to the effect that, “In the first episode alone you see the last moments of the Crucifixion, Judas taking his own life after betraying Christ, Peter denying Jesus three times, and then the miracle of the Resurrection.” Given that The Bible was aired in five two-hour installments but broken down into ten one-hour installments on DVD, it is not clear whether “episode” here refers to a single hour or to an even longer section of the mini-series. But suffice it to say that nearly everything Salke describes was already covered in the ninth hour of The Bible, though most of the resurrection appearances took place during the tenth hour. So a fair chunk of A.D. could very easily be spent rehashing story material that was already covered in some detail by The Bible.

Third, the mini-series does not have a director or cast yet (will any of the actors from The Bible get to reprise their roles here?), but the script will be written by Simon Block, which is almost too perfect a name for someone writing about the early church. (Think of Simon Peter, whose latter name meant “the rock”. It’s not that big a leap from “rock” to “block”, right?) Block has worked mostly in British television, and he has a couple of BAFTA nominations for The Shooting of Thomas Hurndall (2008).

Fourth, the press release doesn’t give us much information regarding the narrative content of the mini-series beyond the death and resurrection of Jesus. In earlier stories and interviews, it was strongly hinted that A.D. would mix the rise of the early church with some of the secular history recorded by Josephus and others, just like The Bible did. That could still happen, but I wonder if Burnett and Downey’s involvement with The Dovekeepers, which revolves around the Jewish Zealots’ last stand at Masada, will siphon off any of their interest in the secular material.

As ever, we shall see.

In the meantime, on a semi-related note, 20th Century Fox just released a Christmas-themed video to promote Son of God, the big-screen version of The Bible that is coming to theatres in February. Fittingly, the video does not dwell simply on the birth of Jesus, but situates it within the context of his life, death and resurrection:

December 18, 2013 The Prince of Egypt came out fifteen years ago today.
Recent Comments
2 Comments | Leave a Comment
Browse Our Archives
Follow Us!