The Prince of Egypt came out fifteen years ago today. 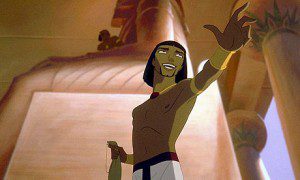 It was fifteen years ago today that The Prince of Egypt opened in theatres across North America. To mark the occasion, here are twelve things you may or may not know about the movie. (I would have come up with fifteen things, but didn’t have quite enough time.)

1. It came very close to being the first DreamWorks cartoon. It may seem hard to believe now, given that the DreamWorks brand has become associated with adolescent wise-ass humour and lots of pop-culture references, but when Jeffrey Katzenberg left Disney and co-founded the DreamWorks studio with Steven Spielberg and David Geffen in 1994, he aspired to epic greatness. After Katzenberg pitched the idea that animated films could take place on a grand scale like Lawrence of Arabia (1962), Spielberg suggested that they make an animated version of The Ten Commandments (1956) — and the resulting film was supposed to help establish the DreamWorks brand. At the last minute, however, Katzenberg decided to release Antz, a computer-animated film starring Woody Allen, in October 1998, two months before The Prince of Egypt came out — and so The Prince of Egypt did not quite become the first DreamWorks animated film to play in theatres. (Click here for an account of how the change to the Antz release date led to heightened tensions between Katzenberg and the guys at Disney-Pixar, whose A Bug’s Life was due to come out in November 1998.) Both Antz and The Prince of Egypt were, at the time, among the most successful non-Disney cartoons ever released, but in the years that followed, hand-drawn cartoons like The Road to El Dorado (2000) and Sinbad: Legend of the Seven Seas (2003) flopped, while computer-animated films like Shrek (2001) and Shark Tale (2004) turned out to be huge hits, so DreamWorks soon abandoned traditional animation altogether.

2. It was the first animated film from a major studio to be (co-)directed by a woman. The Prince of Egypt had three directors, one of whom, Brenda Chapman, became the first female director of a major animated film due to her work on this film. In the DVD commentary, Chapman mentions that she is very pregnant and due to give birth in a week or so; the resulting daughter served as the inspiration for Merida in Disney-Pixar’s Brave (2012), which Chapman was going to direct until the studio took the film out of her hands. As of this year, Chapman is back at DreamWorks.

3. One of the other directors is the great-grandson of sci-fi author H.G. Wells. Chapman’s two male co-directors were Steve Hickner and Simon Wells, the latter of whom went on to direct a live-action version of his great-grandfather’s book The Time Machine (2002). Since then, Wells has also directed a motion-capture version of Mars Needs Moms (2011). Hickner, for his part, went on to co-direct the DreamWorks cartoon Bee Movie (2007), which starred Jerry Seinfeld.

4. The script was written by Star Trek veterans. The screenplay is mainly credited to Philip LaZebnik, who, among other things, had co-written three episodes of The Next Generation and Deep Space Nine prior to this film; one of them, called ‘Darmok’, was partly inspired by the Epic of Gilgamesh. But the film’s credits also note that additional material was written by Nicholas Meyer, who may be best-known as the co-writer and director of Star Trek II: The Wrath of Khan (1982) and Star Trek VI: The Undiscovered Country (1991); he also co-wrote the script for Star Trek IV: The Voyage Home (1986). (The voice of the Pharaoh Seti, meanwhile, was provided by Patrick Stewart, who made his second-to-last appearance as Captain Picard in Star Trek: Insurrection just one week before The Prince of Egypt came out.)

5. The voice of the Egyptian queen who adopts Moses was provided by Helen Mirren. In one of the DVD’s special features, Mirren says, “I was seduced into playing the role when I saw the drawing of this absolutely gorgeous woman. I’ve always liked the idea of playing queens, anyway.” Eight years after the film came out, Mirren won an Oscar for playing Queen Elizabeth II in The Queen (2006).

6. The songs were written by Stephen Schwartz, who had written musicals based on biblical material before. One of Schwartz’s earliest hits, of course, was Godspell, which was based on the life and teachings of Jesus and was turned into a film in 1973. Schwartz also wrote Children of Eden (my review), a musical about Creation and the Flood that was first performed on stage in 1991.

7. The studio solicited input from Jewish, Christian and Muslim leaders. On the DVD commentary, the directors talk about how they wanted Moses to come to Miriam’s defense in the scene where the Egyptian taskmaster is killed, to make the scene more “personal” — but rabbis from across the Jewish theological spectrum objected that Moses needed to act in defense of a random stranger to underscore his growing attachment to the Hebrew people as a whole. If memory serves, the climactic song, now called ‘When You Believe’, was also changed from its original title ‘If You Believe’ after Christian consultants objected to the implicit idea that humans, rather than God, can make miracles happen. The film concludes with a title card that has quotes about Moses from the Jewish, Christian and Muslim scriptures.

8. The movie had three “soundtrack” albums. One of them consisted of music from the actual film, another consisted of “Nashville” artists singing songs inspired by the film, and the third consisted of “Inspirational” tracks inspired by the film. This was not the first film overseen by Katzenberg to get three music tie-ins; the Warren Beatty version of Dick Tracy (1990), produced by Disney when Katzenberg was in charge of both live-action and animated films there, spawned a Danny Elfman score, a various-artists compilation album, and the Madonna album I’m Breathless.

9. There was also a fourth CD that you could only get as part of a Wal-Mart promotional package. This fourth disc was, for the most part, a sampler of tracks from all three of the widely available soundtrack albums, but it also included sections of the Hans Zimmer score that were not included on any of those discs. True story: when I finally got my hands on a copy of the Wal-Mart disc, I created a new disc that included all of the music from the film, arranged in the proper narrative sequence — I even split one of the tracks in two because it included music from two different parts of the movie — and when I toyed with the possibility of uploading the track list to an online CD database, I discovered that someone else had already done that. That’s right, there are other obsessive movie-soundtrack fans out there just like me!

10. The Prince of Egypt was, for a short while, the top-grossing non-Disney animated movie ever. It was not quite the first non-Disney cartoon to gross over $100 million in North America — that honour goes to The Rugrats Movie (1998), which came out a few weeks earlier — but The Prince of Egypt eventually inched ahead of that film and held the top non-Disney spot until another DreamWorks release, the stop-motion Chicken Run, came out in 2000.

11. The film had a straight-to-video “prequel”. Like a lot of major animated features, The Prince of Egypt spawned a video-only follow-up, but instead of a sequel featuring the same characters, it was a sort-of prequel that showed how the Hebrews ended up in Egypt in the first place, called Joseph, King of Dreams (2000). The part of Joseph — the boy with the coat of many colours — was voiced by Ben Affleck, and his brother Judah was voiced by Mark Hamill, whose credits include everything from the Star Wars films to the voice of the Joker in the animated Batman series.

12. A few of the people involved have gone on to other Bible-themed projects. Val Kilmer, who provides the voice of Moses, went on to star in a stage production of The Ten Commandments: The Musical (2004). (Despite mentioning the DVD edition of the musical at this blog seven years ago, I have still never actually watched it, myself.) Ralph Fiennes, who provides the voice of the Pharaoh Rameses, went on to provide the voice of Jesus for The Miracle Maker (2000). Screenwriter LaZebnik is now attached to an animated version of Noah’s Ark. And composer Hans Zimmer went on to score The Da Vinci Code (2006), which had a quasi-biblical flashback or two, as well as this year’s mini-series The Bible (2013).

December 20, 2013 Bible epics -- the article's up!
Recent Comments
0 | Leave a Comment
Browse Our Archives
get the latest from
FilmChat
Sign up for our newsletter
POPULAR AT PATHEOS Entertainment
1