42 star Chadwick Boseman to play one of the Gods of Egypt January 30, 2014 Peter T. Chattaway 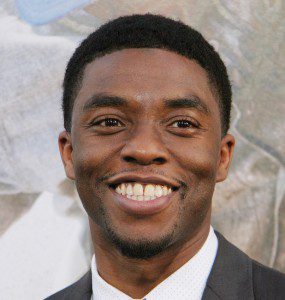 Whenever someone makes a movie set in the ancient world, there’s often some grumbling to the effect that the actors playing the protagonists are, shall we say, ethnically incorrect. Sometimes filmmakers go out of their way to cast actors who could pass for whatever ethnicity their characters happen to be, and sometimes they, uh, don’t. And when they don’t, some people make a point of pointing that out.

That was the case a few months ago when I posted some news regarding Alex Proyas’s Gods of Egypt, which has cast the distinctly European-looking (if, sometimes, by way of Australia) Geoffrey Rush as Ra, Gerard Butler as Set, Nikolaj Coster-Waldau as Horus, and so on. Over the next few months, a few readers argued in the comments below that post that the ancient Egyptians, and the deities they worshipped, should be played by actors with darker skin (though how much darker was, and is, a matter of some controversy).

Well, perhaps the filmmakers were listening. Deadline reports that Chadwick Boseman, who played Jackie Robinson in last year’s 42, has signed up to play Thoth, “one of the most important deities of the Egyptian pantheon.”

It’s not clear what role Thoth will play in the movie, but for what it’s worth, early reports said the film would be based on “the Osiris myth” — the story in which Osiris is killed by his brother Set and avenged by his son Horus — and Wikipedia states that Thoth played a “prominent” role in this story, “being of great aid to Isis.”

After Isis gathered together the pieces of Osiris’ dismembered body, he gave her the words to resurrect him so she could be impregnated and bring forth Horus. When Horus was slain, Thoth gave the magic to resurrect him as well. Thoth was the god who always speaks the words that fulfill the wishes of Ra.

Given the changes to Egyptian mythology that we already know this film will make (Set and Osiris being the sons of Ra rather than Geb, for example), I’m guessing that Horus will already exist and be all grown up before Osiris is killed. That would give the story a more conventional Hollywood narrative arc. But you never know.

And incidentally, that’s something else: Who’s going to play Osiris in this movie?

January 30, 2014
Forest Whitaker in talks to direct, star in The Shack
Next Post

February 3, 2014 Flashback: Ten years of The Passion of the Christ
Recent Comments
0 | Leave a Comment
"What a strange article. Using movies as your basis to defend that Lazarus was murdered ..."
Mark Ross DeFazio The death, resurrection, and second death ..."
"Another with Ethiopian eunuch and Philip https://archive.org/details..."
Jason McKahan Watch: Philip is the original vanishing ..."
"I found Hanky Panky a pretty cool 80s movie when I first saw it on ..."
UniblabBR Sidney Poitier marathon: Hanky Panky (1982) ..."
"In 1972, yes. The movie was made in 1956 but the ratings system didn't exist ..."
Peter T Chattaway One of the reasons I do ..."
Browse Our Archives
get the latest from
FilmChat
Sign up for our newsletter
POPULAR AT PATHEOS Entertainment
1