Flashback: Ten years of The Passion of the Christ

Flashback: Ten years of The Passion of the Christ February 3, 2014 Peter T. Chattaway 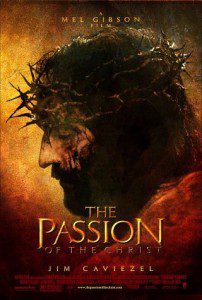 This month marks the tenth anniversary of The Passion of the Christ. The film’s actual release date was February 25, but by the time the film came out, people had been debating it — and seeing it at special preview screenings — for several months. (I myself first saw a rough cut of the film in January of that year.) So I figured now was as good a time as any to re-post all the various reviews, news stories and op-ed pieces that I’ve written about the film, most of which fall between the summer of 2003, when the controversy was already in full swing, and early 2007, when a “definitive” two-disc edition of the film was released on DVD.

I haven’t watched the film all the way through in several years — probably not since the “definitive” edition came out — but it has been fascinating to re-read all these articles and to chart the evolution in my thoughts about the film. In the early days, I was very concerned about the film’s historical inaccuracies and its obsession with violence. But then I was asked to write an essay on the film for a book, and as I thought about the film and wrote about it, I found my appreciation for the film growing — so much so that, by the time I reviewed the two-disc DVD, I was calling it a “flawed but breathtaking masterpiece.”

So, without any further ado, here are the articles. First, the pre-release coverage:

Then, my initial comments on the film itself, once I had seen it:

Then, the immediate post-release coverage:

And then, my essay for the book. Most of the other essays in this book approached the film from historical or theological angles, etc., but mine was supposed to look at the film from a cinematic point of view — and it didn’t take me long to figure out that one of the uniquely cinematic things about this film was its use of flashbacks and point-of-view shots, and that the film’s use of these techniques was actually quite significant from a theological point of view, too. (I was pleasantly surprised to discover, once I read the other essays, that a few of my fellow contributors had focused on how the film brings together the “objective” atonement theology of St. Anselm and the “subjective” atonement theology of Peter Abelard, which dovetailed perfectly with my take on the film’s use of “objective” and “subjective” cinematic devices.) By the time I was finished writing this essay, I had come to a whole new appreciation of the film:

And that was it… until, a couple years later, Mel Gibson was arrested for drunk driving and let out a stream of offensive comments, mere months before he finished making Apocalypto, a gory chase movie that was largely funded with the profits from The Passion. I wrote an op-ed about the arrest and a review of the new film:

And then, finally, my review of the “definitive edition” DVD:

In addition to these Passion-specific articles, I also mentioned the film prominently in a few articles (and blog posts) that looked at the Jesus-movie genre as a whole:

I have written about the film in countless other blog posts as well, such as this April 2005 post about the Oscar-nominated documentary Sister Rose’s Passion, which concerns a nun who devoted her life to Catholic-Jewish dialogue, and who had a thing or two to say about Mel Gibson’s film. Or this June 2005 post on a lengthy panel discussion of the film where the film’s co-writer Benedict Fitzgerald (who later sued Gibson for allegedly underpaying him) offered some insights into how the film was written. But you’ll just have to use the search engine to find all those posts!

January 30, 2014
42 star Chadwick Boseman to play one of the Gods of Egypt
Next Post

February 3, 2014 A few thoughts on the whole Woody Allen situation.
Recent Comments
0 | Leave a Comment
Browse Our Archives
get the latest from
FilmChat
Sign up for our newsletter
POPULAR AT PATHEOS Entertainment
1