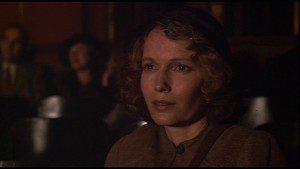 The Arts & Faith community, which I have been part of for over a decade now, released its fourth Top 25 list today — and the theme this time is “Divine Comedies”. Before the vote, there was some debate as to what this term even means, and after the vote, there was some debate about the results and whether they were diverse enough, etc. But you can get a sense of what the list is all about by reading this introductory essay by my friend Steven D. Greydanus. As before, with our list on films about marriage, I wrote two of the blurbs: one on my second-favorite film of all time, The Purple Rose of Cairo (1985), from which the picture above comes; and another on one of my favorite Jesus movies, Monty Python’s Life of Brian (1979).

Incidentally, Steve cites G.K. Chesterton’s love of humour quite a bit in his introductory essay, and that reminds me of the first paragraph of an essay Chesterton wrote shortly before the end of his life, called ‘About the Films’:

The time has come to protest against certain very grave perils in the cinema and the popular films. I do not mean the peril of immoral films, but the peril of moral ones. I have, indeed, a definite objection to immoral films, but it is becoming more and more difficult to discuss a definite morality with people whose very immorality is indefinite. And, for the rest, merely lowbrow films seem to me much more moral than many of the highbrow ones. Mere slapstick pantomime, farces of comic collapse and social topsy-turvydom, are, if anything, definitely good for the soul. To see a banker or broker or prosperous business man running after his hat, kicked out of his house, hurled from the top of a skyscraper, hung by one leg to an aeroplane, put into a mangle, rolled out flat by a steam-roller, or suffering any such changes of fortune, tends in itself rather to edification; to a sense of the insecurity of earthly things and the folly of that pride which is based on the accident of prosperity. But the films of which I complain are not those in which famous or fashionable persons become funny or undignified, but those in which they become far too dignified and only unintentionally funny. . . .

You can read the rest of the essay via Project Gutenberg.

February 26, 2014 How do we define "wickedness" in biblical films?
Recent Comments
0 | Leave a Comment
Browse Our Archives
get the latest from
FilmChat
Sign up for our newsletter
POPULAR AT PATHEOS Entertainment
1