Aronofsky’s Noah: the poem that started it all is now online!

Aronofsky’s Noah: the poem that started it all is now online! March 27, 2014 Peter T. Chattaway 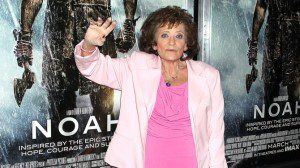 Variety has a story on Vera Fried, the now-retired teacher who inspired Darren Aronofsky to write an award-winning poem about Noah shortly before his 13th birthday. She attended the New York premiere of Aronofsky’s film last night, and she makes a few amusing comments about how he tracked her down years later, and how he seemed to have lost his knack for good punctuation in the interim.

She also reveals that she actually has two scenes in the film — one with Russell Crowe, which has been public knowledge for at least six weeks, and another one in which she plays one of the floating corpses, presumably in Noah’s vision of the Flood.

Before the screening last night, Aronofsky got his former teacher to read aloud the poem that started it all. Here it is, as transcribed by Variety:

Evil was in the world
The laughing crowd
Left the foolish man at his ark
Filled with animals
When the rain began to fall
It was hopeless
The man could not take the evil crowd with him
But he was allowed to bring his good family.

The rain continued through the night
And the cries of screaming men filled the air
The ark was afloat
Until the dove returned with the leaf
Evil still existed.

When I interviewed Aronofsky last month, he said he had found a copy of the poem while his film was in post-production, and he posted it in the film’s editing room. “It’s a little embarrassing,” he said, but he and his co-writer Ari Handel noted that the poem actually kind of has “the same themes and ideas in it as the movie”.

March 31 update: People has its own interview with Fried, as well as a photo of the “poem” — which turns out to have paragraph breaks, rather than line breaks: 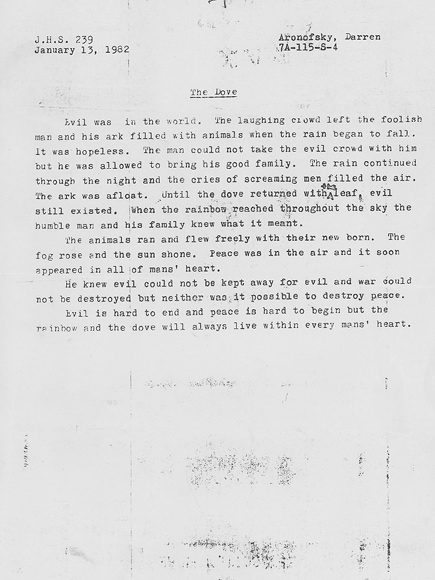 People also has a photo of Aronofsky directing Fried in one-eyed-crone make-up: 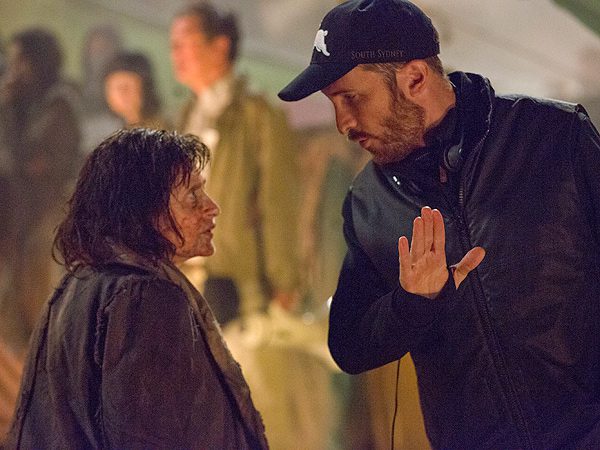 March 27, 2014 Breaking: Does Ridley Scott's Exodus have a new title?
Recent Comments
0 | Leave a Comment
"I have neither noticed that much. I recenty read a leadership book inspired from Cyrus ..."
Hamid Mortazavi Cyrus the Great — a Persian ..."
""AD" stands for "Anno Domini", a Latin expression meaning "In the Year of Our Lord".So ..."
Peter T Chattaway The Chosen — season one, episode ..."
"Why does it say at the start of episode 3 that it takes place 26 ..."
Desiree Chamberlain The Chosen — season one, episode ..."
"What about Hellboy, The Grudge, Ghoulies, and Anaconda?"
45th Spiderbob Group VGCP When R-rated franchises go PG-13 …
Browse Our Archives
get the latest updates from
FilmChat
and the Patheos
Entertainment
Channel
POPULAR AT PATHEOS Entertainment
1