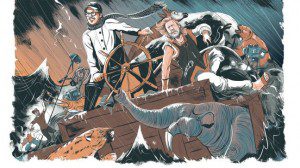 And the interviews keep on coming! In a week already brimming with new information about Darren Aronofsky’s Noah, The Hollywood Reporter has posted a major article on the making of the film that includes some great new quotes from Aronofsky himself.

The article is full of interesting information about the film and the friction that did exist at one point between the studio and the director (who, incidentally, turns 45 today), and it’s worth a read in its entirety (though one or two things it mentions could be considered spoilers). But here are some spoiler-free highlights:

Finally, you can preview the first ten pages of the Noah graphic novel here.