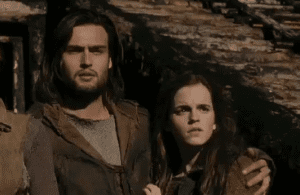 Just one more Noah-themed post before I go to bed.

The Harry Potter fansite Snitchseeker has posted excerpts of an interview with Emma Watson and Douglas Booth (who play Ila and Shem in Noah) that recently appeared in Wonderland magazine.

Watson and Booth don’t say much about the content of the film; their conversation is limited mostly to discussing the shooting conditions, the filmmakers’ reliance upon practical effects (instead of digital effects) wherever possible, director Darren Aronofsky’s insistence that the crew not drink bottled water because of the film’s environmental emphasis, and so on.

But at one point, Watson lets slip that the film may be as epic in length as it seems to be in scope. Discussing how Aronofsky expanded the original biblical story, she says: “He made a three hour movie from three paragraphs’ worth of storytelling.”

Here is the context in which she makes that remark:

Wonderland: Darren has said that he wanted to tell a heavily embellished version of the biblical story – he is, after all, an irreligionist…
Douglas: For me, I didn’t necessarily sign up to make an environmental movie, I just signed up to work with Darren Aronofsky. I’m such a huge fan.
Emma: Darren wrote the script with Ari Emanuel, his writing partner. They did a huge amount of research into various versions, scriptures, writings and different telling of the story – from King James’s Bible to other editions. The main problem is that, in the Bible, the story of Noah’s Ark covers about half a page. He made a three hour movie from three paragraphs’ worth of storytelling.
Douglas: But everything he did take from it was deadly accurate. The measurements for the ark were exactly the same as it was in the Bible – the exact shape and dimensions. Darren is one of the best filmmakers out there, and it was down to his bizarre imagination and creativity to bring a story like that to life.
Emma: To me Noah as a story is very much “doves and rainbows” – it’s a little cheesy in an hilarious kind of way. Mixing that with someone like Darren Aronofsky – who is the lord of darkness and angst – makes for a really interesting dialogue.

So, is Noah really going to be three hours long?

Maybe, maybe not. The biblical story certainly takes up more than three paragraphs, so if Watson wasn’t speaking literally on that point, then she might not have been speaking literally on the other point, either. Certainly Aronofsky has never made any particularly long films before — according to the IMDb, his longest film to date is The Wrestler (2008), which clocks in at 109 minutes, or a bit less than two hours — but perhaps the subject matter here called for something bigger. We shall see.

Incidentally, one other Noah-themed interview popped up online today. All Animals, a publication of the Humane Society of the United States, posted an interview with Aronofsky in which he discusses his reasons for using CGI animals rather than the real deal. (Apparently he doesn’t always prefer practical effects to the digital kind.) He also talks about his history with the School for Field Studies, which goes back to his high-school days — kind of like his interest in the story of Noah itself.

And yes, these interviews both appeared online today, as did that Rolling Stone article I linked to earlier today. The publicity campaign for this film is warming up!

February 11, 2014Noah: a new graphic novel cover, and seven new posters
Recent Comments
0 | Leave a Comment
Browse Our Archives
get the latest from
FilmChat
Sign up for our newsletter
POPULAR AT PATHEOS Entertainment
1