Darren Aronofsky on the “fantastical creatures” in Noah 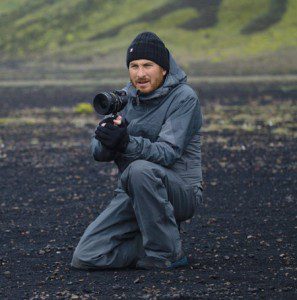 The dinosaurs of Jurassic Park may have been the first photorealistic computer-generated animals to grace the big screen, but in the 20 years since then, filmmakers have used computers to simulate more familiar lifeforms — sometimes for safety reasons, sometimes because it gives the filmmakers more control over the animals’ actions, and sometimes because it’s just more cost-effective. See, for example, the horses that were crushed underfoot during one of the big battles in The Lord of the Rings, or the tiger and other animals that shared a lifeboat with a human shipwreck survivor in Life of Pi.

And it’s not just animals. Just last night I was watching the iTunes commentary for Star Trek into Darkness, and one of the special-effects guys mentions quite casually that “literally fifty percent” of the aliens who worship the Enterprise at the end of that film’s opening sequence were actors in make-up, and the rest were created in a computer. And this, despite the fact that there are only a few dozen characters onscreen and they are relatively close to the camera; we’re not talking about one of those epic cast-of-thousands shots like the ones Peter Jackson popularized.

So it should come as no surprise that movies based on the story of Noah’s Ark have been turning to computers to create their little zoos, too.

Evan Almighty, for example, used a mixture of real animals and CGI animals, which drove up the cost of the film to the point where it became the most expensive comedy ever made — but the film was still attacked by animal rights activists for relying on companies that may or may not have abused the animals while training them.

And now, of course, there is Darren Aronofsky’s Noah, which is due to come out in March of next year. It would seem that the film will make use of at least some real animals, given the picture that the cinematographer tweeted last year of snakes on the set. But in a new interview on the Directors Guild of America’s website, Aronofsky says he is taking advantage of the fact that he’s using CGI anyway to “tweak” all of the animals so that they look a little different from what we’re used to:

There are no live animals on Noah, which was shot in New York and Iceland; everything living that’s non-human is rendered digitally. “We had to create an entire animal kingdom,” says Aronofsky. “All the animals in the movie are slightly tweaked; I didn’t want the clichéd polar bear, elephant, and lion walking onto the Ark; I didn’t want the shot of a giraffe’s head looking over the rail. I wanted to respect the storyline and think what would have been involved if it all really happened.”

In collaboration with Industrial Light & Magic (ILM), “We basically went through the animal kingdom and pinpointed the body types we wanted: some pachyderms, some rodents, reptiles, and the bird kingdom. We chose the species and they were brought to life with different furs and colors. We didn’t want anything fully recognizable but not completely absurd either.”

Around the time of this interview, Aronofsky was told by ILM that they had just done the most complicated rendering in the company’s history involving the animals on the Ark.

“It was a nice badge of honor,” he smiled. “I don’t think it’s the most incredible shot, but I think because of all the hair on the animals it was incredibly complicated for them. They said, ‘We can only render it two or three more times so make sure those are exactly right because they take so long and are so complex.’”

Aronofsky also notes that using real animals has become politically incorrect, for lack of a better term, due to the safety issues involved:

The decision not to use real animals was easy. “I think we’ve learned from people who have done it before that that’s a really bad move,” he says. “Politically it’s not a great thing to work with live animals and that’s becoming more apparent to people as time goes by, but also, technically, it would have been extremely difficult. And we’ve learned from lots of other films how hard it is to bring different kinds of animals together.” (As in clashing species or animals that might decide to eat their co-stars.)

Elsewhere in the interview, Aronofsky refers to the “fantastical creatures” that will appear in the film — and sure enough, in the screenplay I read a few months ago, there are references to “single-horned bison”, “giant mutated horse-beasts” and so on.

These “fantastical” beasts remind me of two things that we have seen in earlier films. 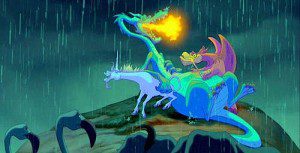 First, some films have asked whether Noah would have saved all of the animal species or only some of them. In the screenplay that I read a few months ago, Noah worries that the carelessness of his sons aboard the ark could cause certain species to be lost forever, and earlier films have played with similar ideas: For example, in the Noah’s Ark sequence from Fantasia 2000, a group of beasts that we would now regard as mythical — a unicorn, a dragon, etc. — laugh and mock the animals that are boarding Noah’s ark, and it is because they fail to heed Noah’s warning that they are now extinct.

Very few images have been released from Aronofsky’s film so far, and the few that do exist have focused on the human characters — but the film itself comes out in five months, so hopefully we won’t have to wait much longer to see just what Aronofsky has done with his animals, or indeed with the rest of his antediluvian world.

October 4, 2013
Gravity and prayers for those who travel by space
Next Post

October 12, 2013 Jay Robinson: from Caligula to Watergate and outer space
Recent Comments
0 | Leave a Comment
Browse Our Archives
get the latest from
FilmChat
Sign up for our newsletter
POPULAR AT PATHEOS Entertainment
1