Terminator update: an aging cyborg and a grown-up boy 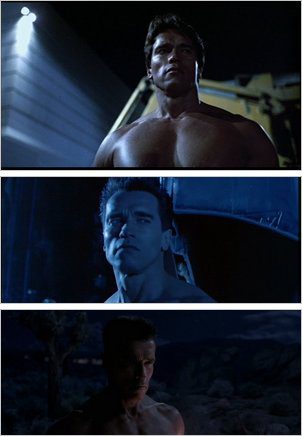 So this is what it’s come to for Arnold Schwarzenegger. The Austrian bodybuilder-turned-actor, who was one of the biggest stars in the world roughly 20 years ago, is now starring in a movie (Sabotage) that won’t even get a theatrical release in Canada when it opens in the United States this week.

Fortunately, for him, the sci-fi franchise that kicked his career into high gear is still around, and still wants him. And this week, Schwarzenegger explained how it is possible that an actor who was 36 the first time he played a cyborg from the future can still play a product of the robot assembly line at the ripe old age of 66.

Speaking to MTV, he said: “The way that the character is written, it’s a machine underneath. It’s this metal skeleton. But above that is human flesh. And the Terminator’s flesh ages, just like any other human being’s flesh. Maybe not as fast. But it definitely ages. Terminator deals a lot with time travel, so there will be a younger T-800 model and then what that model does later on when it gets reprogrammed, and who gets ahold of him. So it will be all kinds of interesting twists in the movie.”

The pictures above show Arnold making his first appearances as a Terminator in his 30s, 40s and 50s. Next year, we will see how he does it in his 60s.

Meanwhile, in other Terminator-related news, Borys Kit tweeted yesterday that the makers of Terminator: Genesis are thinking of casting John Boyega, from Attack the Block (2011), as Daniel Dyson, the son of the Cyberdyne scientist who played a key role in creating the artificial intelligence that led to the Terminators in the first place.

Dyson was briefly seen as a seven-year-old boy in Terminator 2: Judgment Day (1991), where the remote-control truck he was playing with distracted his father just long enough to save him from an assassination attempt by Sarah Connor.

Boyega was born in 1992, four years after the character was, so the filmmakers are presumably thinking of showing what this character is up to in the present day — but will that be the present day on the timeline of the third and fourth films, where the war against Skynet began in 2004? Or will it be the present day in some never-before-seen timeline where, as in the real world, the war never happened?

March 26, 2014
Exclusive: Darren Aronofsky and Ari Handel on biblical accuracy and combining science and religion in Noah
Next Post

March 27, 2014Noah interview round-up: director Darren Aronofsky
Recent Comments
0 | Leave a Comment
Browse Our Archives
get the latest from
FilmChat
Sign up for our newsletter
POPULAR AT PATHEOS Entertainment
1