Exclusive: Darren Aronofsky and Ari Handel on biblical accuracy and combining science and religion in Noah 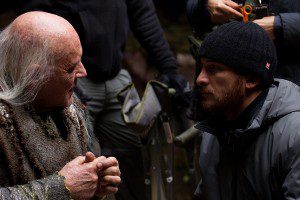 A few weeks ago, I had the privilege of seeing Darren Aronofsky’s Noah and speaking to both Aronofsky and his co-writer/co-producer Ari Handel immediately after the screening. The following is part three of our conversation. Click on the links for parts one and two. The film comes out tomorrow night.

Warning: This section of the interview begins with a spoiler from the film’s third act.

There’s been a lot of talk lately about the question of “accuracy.” It’s a word that comes up constantly in relation to Bible films, I think because people are afraid of creativity, and yet of course your film does definitely follow certain things like the measurements of the Ark, and yet on the other hand your film has only one wife for one of Noah’s kids–

DA: It doesn’t matter, it doesn’t talk about that in the Bible.

It doesn’t talk about what in the Bible?

DA: It just says they all go on the boat. That’s all it says! But there is nothing– It would be a hard task for you to find something that is actually contradictory to the original text, that can’t be a midrash.

That the film can’t be a midrash?

AH: Here’s my answer to that. A lot of the patriarchs are very long-lived, and you can look at how to look at that. Noah dies at 950, and he has kids at around 500, the Flood comes at around 600, so he’s about– When he has those kids, he is at about five-ninths or 50 percent of his lifespan. So at about this time he should be middle-aged. And if his kid is 100 years old and you’re going to live to be about 1000, then you’re about 10 years old.

DA: Maybe the earth was spinning faster around the sun.

I was wondering if you were going to bring that up!

AH: It’s miraculous. But what’s important is what are they like, are they children or are they men? And it seemed to us like it’s a much more interesting and dramatic story, and you can do more with it, if you take the route that they’re very young in comparison to their father, and they still have a lot to learn from their father and they still are being morally guided by their father. So casting them now as children allows an audience to feel that, which was I think certainly true of the characters most likely. He was the patriarch and they were the children.

DA: Go ahead. Something else that contradicts scripture.

Well those are the big ones!

DA: I think it’s more interesting, instead of saying it’s five or ten years, to say sure, Noah is four or five hundred years old in the film, it’s just about the relativity of time and the perception of time, and because we’re in a prediluvian world, there are rules that are very different. It’s a world when rainbows didn’t exist, it’s a world when the leviathan was on the planet, it’s a different time, a different place.

AH: And theologically, you really can read the Flood literally as an inverse of Creation, the way the waters of the heaven were separated in Creation and the waters come together in the Flood, so what we’re talking about is not just the world got filled up with water and got very wet — and I think this is kind of really what’s in the nature of the description in Genesis of the Flood — Creation was undone, and except for that Ark, what God had made was almost gone, and it was just that little bit left, surviving, it was an undoing of Creation.

So when the new world comes, it’s a new world, and maybe a slightly different world. And that’s part of the reason why it feels like that, is to make it feel different.

DA: It’s funny, on our call sheets, it said “New Eden” when we were shooting that day, and I was like, “Oh, we gotta correct that, it’s a new world, not a new Eden.” I was like no, it’s fine actually, because it sort of is a new Eden. That was how we saw it in those scenes.

One question I’m intrigued by is the question of cosmology. Some would argue that the early chapters of Genesis follow a very different cosmology than what we’re used to — a flat earth with fountains of the deep and so forth — and when I saw the trailer and saw those geysers shooting up, I thought that was fantastic, but then the trailer also showed a spherical Earth, and so, how was it combining those two things? What principle were you following there?

DA: Look, I think, you know– That’s a very very very good question. I never really perceived that, when I read Genesis, that it was a flat world. Where does it say that it’s a flat world?

It’s one of those things that biblical scholars have inferred from references to either pillars of the earth or references to the windows opening in the heavens, the canopy.

DA: That’s interesting. See, I always look at that as more, you know, it’s poetry, it’s beautiful writing, and so it’s a way of describing it. I didn’t really lock it down to sort of changing how we perceive the planet now. But that would have been a really interesting way to go, actually. If we had thought of that, we would have been like — because we were trying to invent the prediluvian world — we could have said, “Hey, the world was flat back then, so how are we going to represent that?” (laughs) We actually might have done something with that if we’d talked to you beforehand–

DA: –and then actually had the wrapping of the planet, which could have been an amazing CG type of moment, but we didn’t run into that, unfortunately, those ideas.

One thing I find really fascinating about the film is the way that you do combine the biblical sensibility with the modern sensibility, not just in that cosmological sense, but also in terms of your Creation story, with the evolution and the things smashing into the Earth and creating the moon and all that.

DA: I always thought it was very intriguing that the Bible got it pretty right, you know, of kind of what science is representing as out there, and that that connection was very very interesting, and that, hey, you know, maybe people aren’t so far apart here, and maybe there’s a way to sort of understand both sides of the argument, and sort of, y’know, start a conversation that way.

I mean for me, also, that sequence, I really wanted to represent the extensiveness of the cornucopia of the animal kingdom and of creation. That’s kind of what that is, trying to represent all the amazing creatures that were created, and landscapes and celestial objects that were created over those six days.

AH: All the work.

DA: All the work!

I revisited all of your features over the last week or two, just to sort of prepare for this screening, and I was struck by the recurring theme of purity or perfection, whether it’s Natalie Portman seeking perfection in her dance [in Black Swan], or in Pi you’ve got those Kabbalah guys who are basically saying, “No you can’t, you’re not prepared for God, you’re not pure.” What do you think motivates this recurring theme, or where is it coming from?

Well certainly one could argue that he’s sort of trying to purify the Earth, he believes Earth would be purer without humanity for example, because humanity has ruined it.

DA: I don’t answer those types of questions, because I try not to be too aware of it. It’s just things that I’m attracted to that I’m passionate about, that make sense to me, and that’s the only way I know how to kind of make things come to life.

Come back tomorrow for the final installment of this exclusive four-part interview.

March 25, 2014
Noah video round-up: Tubal-Cain rallies the troops in a new clip, plus a new featurette on the animals and a new TV spot
Next Post

March 26, 2014 Terminator update: an aging cyborg and a grown-up boy
Recent Comments
2 Comments | Leave a Comment
"Gentlepersons:While I am a lifelong Christ-follower and served as Chaplain to a graduate program in ..."
Darrell A. Harris Exclusive: Patrick and Paul Aiello on ..."
"I know this is from 5 years ago, but I just got around to seeing ..."
digital bookworm Exclusive: Watch the trailer for Becoming ..."
"Thanks so much for making this list. I was thinking of doing something similar, but ..."
Bill Kudrle The Chosen — season one scripture ..."
"Per Wikipedia: "In classical rhetoric and logic, begging the question or assuming the conclusion is ..."
Peter T Chattaway Review: The Most Reluctant Convert: The ..."
Browse Our Archives
Related posts from FilmChat