Exclusive: Darren Aronofsky and Ari Handel on the meaning of “righteousness”, whether villains can believe in God, and the hurdles they faced when pitching Noah 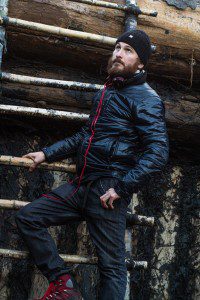 A few weeks ago, I had the privilege of seeing Darren Aronofsky’s Noah and speaking to both Aronofsky and his co-writer/co-producer Ari Handel immediately after the screening. The following is part one of our conversation. The film comes out Thursday night.

I don’t know if I should admit this, but a copy of an early draft of your script drifted my way, so when I read it, I was struck by the justice and mercy theme, and it was really interesting to see that here in the finished film.

Darren Aronofsky: Well, that was a big part of the movie for us. I think when Ari and I started working on the project and we started reading the Bible over and over again, there’s this term where they call Noah “righteous,” and so what does that word mean? People sort of have a sense of what the word means, but there’s a lot of ways to define it when you really try to figure it out, and so we started talking to a lot of people and looking it up and tried to understand it, and a lot of the different theologians and scholars that talk about it, we came upon this idea that it was a perfect balance of justice and mercy.

And then Ari sort of put it a really good way, by defining it — since we’re both parents — as that, you know, if you’re a parent with too much justice, you destroy your child with strictness, and if you’re a parent with too much mercy, you destroy them with too much leniency. So being a really good parent is about finding that balance, which I think is sort of, kind of, in the story of Noah. Actually it’s similar to the story that God goes through; at the beginning of the story of Noah, he wants justice, and by the end he finds mercy through the rainbow, and grace. And so it was that balance that we were really interested in.

It’s interesting you said “the story God goes through.” Does God also have a character arc in the film?

DA: Hmmm. I think that’s a good question. I don’t think so. I think God kind of knows what’s going on the whole time, in our film, and I think he puts his creation through tests to arrive at a conclusion that I think he wants him to arrive at. But he has to let him learn it for himself.

Ari Handel: It maybe even teaches him something that is going to be of value.

DA: It’s like a parent to a child is how we saw it, very much. But that’s the way we tried to relate to it, is a father to a son, to see how– The same way you would teach a child something, you would want the child to learn for themselves. That’s the best way to teach someone. You tell a kid a million times, “Don’t play with fire,” but until they play with fire, they don’t learn their lessons, and hopefully they survive it and hopefully they make the right decision because of how they were set up, and how you’ve chosen to teach them. So for us the story of the film is a test to bring Noah to the same conclusion that God wants him to get to.

I don’t know if you’re familiar with an evangelical writer named Philip Yancey, but years ago he wrote a book called Disappointment with God, where he talks about how he read the entire Bible over the course of a few weeks, and the impression he got from the Old Testament is that God learns to be a parent. That was his reaction.

DA: Yeah, that’s interesting. There seems to be a transition, though. It’s a very vengeful God at the beginning of the story, very angry, and at the end there’s this new pact, and a new start, so that you know, it’s an interesting transition from vengeful to a merciful God in the story of Noah.

It seems like there are multiple characters here trying to imitate God, as it were. Noah is trying to follow the will of God as he understands it, and that means possibly going too far, but Tubal-Cain also has a line in there about dominion and subduing the earth and so forth, and he also makes a point of saying a couple times that “I’m made in God’s image too.”

DA: Well I mean, what’s interesting about this film is the normal way to go with this, with the movie, is the bad guy wouldn’t believe in God, but of course the bad guy does believe in God in this film, because they’re ten generations descended from Adam, so creation is a recent memory for all these characters, so of course, of course God exists. It’s not like there’s a question of God that can’t possibly exist in that mindset.

It’s similar to, like, with Noah, a lot of people when they first read the script were like, “Well why doesn’t he have any doubt when he first hears from God?” And we were like, “Yeah, but he’s the direct descendant of Adam, Adam is a recent parent, his great-grandfather Enoch walked with God, Methuselah is a very holy man.” So the existence of God is not a question in the story, but how Tubal-Cain perceives things is in many ways how–

You know, he’s a little upset, and I think Ray [Winstone, who plays Tubal-Cain] talked about it, and he comes from a very different background, but he would talk about being left like– What do they call those kids that are left? Latchkey kids. He was like, I’m a latchkey kid and I’ve burnt down the kitchen, and now my dad’s mad at me. And that’s the way he perceived it. But it was very important that his character always believed in God.

I regret to say that when I was 10 or 12 years old, I actually memorized that family tree. Adam, Seth, Enosh, Kenan, Mahalelel, Jared, Enoch, Methuselah, Lamech, Noah — yeah, I’ve got that memorized.

So when I heard Lamech reciting it at the beginning of the film, I was like, “Ah yeah.” And in fact, when I heard two years ago that Anthony Hopkins was playing Methuselah, I went “Oh!” Because there have been other Noah movies, like John Huston’s, but they haven’t–

DA: John Huston, I think, skipped over Methuselah. He went straight from Cain and Abel to Noah.

Pretty much. And then there was the Jon Voight film which did some really bizarre stuff with Sodom and Gomorrah, but I think even there, I don’t recall there being any Methuselah stuff.

DA: Did they really have Sodom and Gomorrah in the Jon Voight one?

Yes! They have Sodom and Gomorrah being destroyed before the Flood, Noah is from Sodom, and so is Lot, and then Lot shows up as a pirate who attacks the Ark after the Flood happens. Have you not seen it?

DA: You know what? It’s funny. To be honest, I don’t think I ever actually watched it. When I first made Pi, I know what year it was, that Hallmark movie, and I know it was a Hallmark movie, it was 1998 or ’99 or so, because I was starting to pitch the Noah idea around Hollywood–

DA: Yeah, I set it up with this famous producer, Lynda Obst, who was a big fan of Pi, and she was like, “This is going to be big,” and we started talking about it, and then Hallmark announced that they were doing the Jon Voight film. So then it sort of went on hibernation for a little bit, because someone else in Hollywood was doing it. I think I started to watch a little bit of it, and I just realized it wasn’t really what we were thinking of doing.

So did that also get in the way?

DA: I think it may have. Not really. I mean, that was so clearly a different genre of what we were doing. I think the problem was that when we — Ari and I — first started talking to different people in Hollywood back in ’03 about making the film, the idea of the biblical epic as a genre was really dead, and very hard to imagine, and I think there were a lot of jokes when we went around to the different studio heads, saying, “This is something that’s very passionate to me,” and they didn’t really–

They made a few jokes, like, “How are you going to–” Because they saw Noah as a comedy, and a kind of silly subject matter, and I was like, “No, no, you have to actually read the story, it’s actually not a comedy. And it’s definitely sold to children, but it’s much more complicated than that. There’s a lot more going on. The second thing he does after they get to land is he gets drunk, and is naked. It’s very complicated what that character is, and what’s going on. There’s a lot to work with.” And so it took Hollywood I think a long time to get the idea, “Oh wow, this is a really interesting genre.”

And what I was always pitching is, these are the original superheroes, and in fact, if you were just to treat it like an origin story, Genesis is much better written than any of the origin stories for any of the superhero stories! I have a seven-year-old boy and I just read him the origin stories of Superman and Batman, and I have this one book that I had as a kid that’s all the different origin stories, and they’re total nonsense. But the Genesis story actually has all these great ideas, and things that people have been thinking about for a really long time to build on and bring these characters to life.

Come back tomorrow for part two of this exclusive four-part interview.

March 24, 2014 Noah video round-up: a new clip, a new music video, and soundbites from faith leaders and filmmakers alike
Recent Comments
0 | Leave a Comment
"Animation would uniquely allow the creator to show the genitalia without getting into the waters ..."
Kellen The naked Christ in film: birth, ..."
"Gentlepersons:While I am a lifelong Christ-follower and served as Chaplain to a graduate program in ..."
Darrell A. Harris Exclusive: Patrick and Paul Aiello on ..."
"I know this is from 5 years ago, but I just got around to seeing ..."
digital bookworm Exclusive: Watch the trailer for Becoming ..."
"Thanks so much for making this list. I was thinking of doing something similar, but ..."
Bill Kudrle The Chosen — season one scripture ..."
Browse Our Archives
Related posts from FilmChat