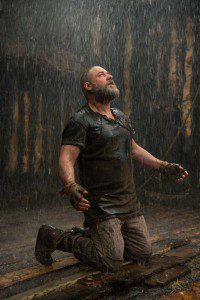 Reviews of Darren Aronofsky’s Noah have been trickling out for a few days now — you can read my own first impressions here — and one of the more puzzling remarks I’ve come across so far is a bit from Todd McCarthy’s review in The Hollywood Reporter.

Specifically, McCarthy, who likes the film, asserts in passing that Noah “will rile some for the complete omission of the name ‘God’ from the dialogue”.

When I first read that, I wondered who McCarthy could possibly be referring to. Who, exactly, would be so easy to offend, so eager to nitpick the smallest detail, so ready to assume the worst about this movie that they would live up to the stereotype invoked by McCarthy and actually make an issue of this?

To be fair, Big Hollywood — the Breitbart website that has been hostile towards Noah ever since it published a critique of an early draft of the script in October 2012 — devotes only a few sentences to this bit from McCarthy’s review. But devote them, it does, quoting that one line and commenting that the absence of this word “might make the movie a harder sell to its intended audience–faith-friendly viewers.”

To which all I can say is: Please.

First of all, even if Big Hollywood had nothing to go by but McCarthy’s review, they would still know that Noah and his grandfather Methuselah — and presumably other characters as well — do address God, but they call him “the Creator” instead.

Second, it should be pretty obvious from everything that has been said and revealed about this film so far that God is a major part of it. Sure, maybe no one calls him “God” per se, but who else is sending the Flood, the visions and the animals?

Third, calling God “the Creator” underscores our relationship to him as part of his creation. The creation of the world is a major flashback sequence in this film, and the memory of it hangs over everything else that happens here — so calling God “the Creator” keeps that element foremost in our minds. It also has implications for our stewardship of the environment in a way that a word like “God” does not.

Fourth, I just generally like it when a movie that takes place in the distant past has the characters speak in something other than modern colloquial English. (See, e.g., how Ben-Hur screenwriter Christopher Fry changed lines like “How was your dinner?” to “Was the food not to your liking?”) Giving God a slightly different name like “the Creator” helps Noah to feel like it takes place in another time, another place.

Fifth, in the Jewish tradition at least, to avoid using the name of God directly — whether by writing “God” as “G-d” or by calling him something else like “HaShem” (which is Hebrew for “The Name”) — is actually a sign of respect.

There may be other counter-examples, but the one that stands out to me, because it’s written in my notes, is a scene in which Tubal-Cain calls himself a king, and Ham replies, “My father says there can be no king. The Creator is God.”

But don’t just take my word for it. My friend Steven D. Greydanus wrote that line in his notes, too. And we saw the film at different screenings, a week apart.

So, please, enough of this meme.

March 29 update: A few sources now report that what Ham actually says is, “My father says there can be no king in the Creator’s garden.” So take my final point with a grain of salt. But even if I’m wrong on that one detail, my other points still stand.

March 24, 2014 Exclusive: Darren Aronofsky and Ari Handel on the meaning of "righteousness", whether villains can believe in God, and the hurdles they faced when pitching Noah
Recent Comments
8 Comments | Leave a Comment
Browse Our Archives
Related posts from FilmChat