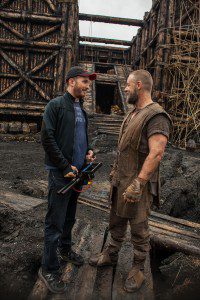 A few weeks ago, I had the privilege of seeing Darren Aronofsky’s Noah and speaking to both Aronofsky and his co-writer/co-producer Ari Handel immediately after the screening. The following is part four of our conversation. Click on the links for parts one, two and three. The film comes out tonight.

One last question — for now, I guess, because I’d love to talk even longer–

Darren Aronofsky: Yeah, yeah, you could always come over to our dorm room. (laughs) I feel like I’m back in college. This is sophomore year at college, is me and Ari and a bunch of guys talking. I love it.

Watching Pi again actually made me feel like I was back in college too, there’s a lot of that stuff.

In a film like this, I can’t think of a better way to word this than how do you balance the fantasy with the prophetic? The idea that on the one hand, I think you yourself have made a comparison between this and the Lord of the Rings movies, it has some of that sort of prehistoric feel to it, but at the same time, you are trying to say something about the world and the way it is today, so that’s what I mean by the prophetic, the sense of speaking to the way the world is now.

No? You have that montage with all the armies, and there’s certainly a modern-day connection there.

AH: You can come up with three. Don’t eat of the apple, the tree at the centre of the garden. That was the first rule, broke that. Second one was, “I give you every green plant as food,” so eat plants, not meat, until the Noah story, but before that, that’s the other one. That’s why we have that in the film. And the third one is, it’s not clearly stated, “Thou shalt not kill,” except when Cain kills his brother, God gets extremely upset and there’s a consequence. So man-on-man violence, violence against animals or in terms of consumption, and disobeying the will of God. Those are the three.

DA: Also, there’s one other interesting note that a lot of people don’t think about, that is after the Noah story, is the Noahic laws that are established, and one of those laws is “don’t eat live flesh,” so there’s this strange– It’s not “don’t eat flesh any more,” it’s “don’t eat live flesh,” so that kind of pointed to certain ideas of what the wickedness of man might have been before Noah, ’cause that kind of said that maybe people were eating live flesh before. So there were clues about the wickedness of man, so what we decided to do is demonstrate that wickedness of man. Noah was entrusted to save creation and be a steward of creation and take care of the animal kingdom.

You just reminded me of another possible inaccuracy.

You have the animals going in two by two, do you?

DA: Oh, you mean the seven? They’re on, they’re in the background, and you don’t really see them, and I can point out where we have seven and seven in the big animal shots, but it’s interesting because there’s kind of these– First the story describes two by two, and then it describes the seven later on as an addition, so we just used it as an addition.

DA: But when you see it again in the big shot overhead that comes down and sees the Ark, all walking in it, there’s two patches of where I have seven of one animal, of two different species of animal, so you’ll see it there.

That came to mind because you mentioned the idea that there was no meat-eating before the flood, and normally the distinction between clean and unclean is the clean ones are the ones you can eat.

DA: That comes in Leviticus, which is three books down. And actually, it says in the Garden of Eden, it says you are given plants to eat. It doesn’t talk about eating meat, ever. It says your food is the plants. That’s in Genesis 2:15, right? 2:16, about? It’s right in there. The only time it talks about what’s for food is that. It doesn’t ever talk about eating animals, because in the Garden they were eating plants, and then the first story after is Cain and Abel, so.

AH: J and A and that stuff?

The idea that the parts of Genesis that use “Elohim” for the name of God come from a different source than the parts that use “Yahweh”. It’s been argued that there are two completely separate Noah stories that are actually quite complete that have been sort of interlaced.

DA: But I didn’t want to say that, because I think it offends certain people who believe that it’s written by hand, so we don’t talk about that.

AH: But we’re aware of that.

For us, none of that stuff mattered, and we were into that. We didn’t care, authorship or that, because we treated Genesis as the word of God, as complete truth. We were trying to bring that story to life so we didn’t want to contradict anything. We wanted to represent everything that was there and let it inspire us to tell a dramatic story with the themes and the ideas that are in there.

So, y’know, once again going back to the drunkenness, the second thing he does after they get to land is he gets drunk and has a falling out with his son, so that completely gave us a complete narrative arc to think about. What is that story between Ham and Noah that eventually leads to that? Sure you could say it’s that one incident that happened on the beach, or maybe it’s an incident that goes back to their childhood, when Ham first plucks the flower and is a more rebellious, inquisitive kid, and how do you deal with that as a parent, when you have that type of issue.

And sure, you can call that not in the Bible, but it’s so interesting to try to bring that to life for a modern audience, and use dramatics to kind of tell that story, that ultimately leads to the same thing, which is [spoiler redacted]. The story is sort of represented correctly.

AH: And in the midrashic tradition, you see things like that are clues. A story like that is a mystery, a clue that invites you to look for meaning.

DA: Within our tradition, as being Jews, a long tradition of thousands of years of people writing commentary on it, where literalism is a different school and people actually look at it for clues and try to apply it to lives now, and to your present, and so for us in our tradition, there isn’t anything we’re doing that’s sort of out of line or out of sync, but within that, I think you don’t want to ever contradict what’s in there.

In all the midrash tradition, the text is what the text is. The text exists and is truth and it is the word and it is the final authority, but how you decide to sort of interpret it, you have that possibility to open it up and open up your imagination to be inspired it.

AH: And there’s puzzles in there, with meaning to be found.

DA: Yeah. So that all the things that seem to contradict, the things that don’t make sense, actually do make sense. And that extends all the way through Kabbalah and all through people actually then trying to turn the words into numbers and trying to understand the things mathematically, all different ways of trying to understand the text but sort of assuming that what’s in the text is there for a reason. But what it actually means can be seen in lots of different ways. It’s part of our tradition to do this.

March 27, 2014 Noah at the movies -- the article's up!
Recent Comments
3 Comments | Leave a Comment
"Gentlepersons:While I am a lifelong Christ-follower and served as Chaplain to a graduate program in ..."
Darrell A. Harris Exclusive: Patrick and Paul Aiello on ..."
"I know this is from 5 years ago, but I just got around to seeing ..."
digital bookworm Exclusive: Watch the trailer for Becoming ..."
"Thanks so much for making this list. I was thinking of doing something similar, but ..."
Bill Kudrle The Chosen — season one scripture ..."
"Per Wikipedia: "In classical rhetoric and logic, begging the question or assuming the conclusion is ..."
Peter T Chattaway Review: The Most Reluctant Convert: The ..."
Browse Our Archives
Related posts from FilmChat