Noah video round-up: Tubal-Cain rallies the troops in a new clip, plus a new featurette on the animals and a new TV spot

Noah video round-up: Tubal-Cain rallies the troops in a new clip, plus a new featurette on the animals and a new TV spot March 25, 2014 Peter T. Chattaway 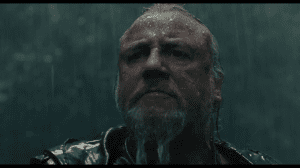 I’m too busy actually writing about Noah these days to spend much time analyzing the videos the way I used to, but the film comes out in two days so you’ll have a chance to see it all soon anyway. In the meantime, here are a few new videos that the studio has released since yesterday.

First, our fourth clip from the film. This one features Tubal-Cain rallying his troops with a cry that foreshadows the human arrogance of Babel (“Men united are invincible!”), but I daresay Ray Winstone makes the character sympathetic, to a degree, too, because you sense his hurt at being rejected by God:

Second, a featurette on how they created the CGI animals:

And finally, a new TV spot that features a couple new shots:

March 26, 2014 Exclusive: Darren Aronofsky and Ari Handel on biblical accuracy and combining science and religion in Noah
Recent Comments
0 | Leave a Comment
"I certainly hope to! Just haven't had the time to do Season 2 yet."
Peter T Chattaway The Chosen — season one scripture ..."
"Hi Peter.Thanks for this extensive list. Will you be doing the same for all seasons? ..."
Meelperd The Chosen — season one scripture ..."
"I have neither noticed that much. I recenty read a leadership book inspired from Cyrus ..."
Hamid Mortazavi Cyrus the Great — a Persian ..."
""AD" stands for "Anno Domini", a Latin expression meaning "In the Year of Our Lord".So ..."
Peter T Chattaway The Chosen — season one, episode ..."
Browse Our Archives
get the latest updates from
FilmChat
and the Patheos
Entertainment
Channel
POPULAR AT PATHEOS Entertainment
1