Box-office update: Noah might get edged out of the top ten, Heaven Is for Real does better than expected, Son of God and God’s Not Dead begin to see some action overseas

Box-office update: Noah might get edged out of the top ten, Heaven Is for Real does better than expected, Son of God and God’s Not Dead begin to see some action overseas April 20, 2014 Peter T. Chattaway 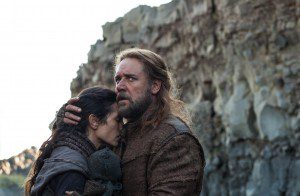 Noah may or may not be in the top ten in this, its fourth week of release.

Deadline reports that Noah is virtually tied with God’s Not Dead and newcomer Disneynature’s Bears for the #9 spot, with a weekend haul of $4.8 million each. Box Office Mojo gives Noah the edge with an estimated $5 million, while Leonard Klady says God’s Not Dead is well behind the other two, with only $4.3 million.

In any case, one of those films will end up outside the top ten, in the #11 spot, when the final figures are released tomorrow. If Noah turns out to be that film, then it would have one more thing in common with Son of God, box-office-wise, as that film fell out of the North American top ten in its fourth week of release, too.

Depending on which estimate one follows, Noah’s take this week represents a drop of between 33.8% and 38% since last week, which is smaller than the 50.8% percent drop that Son of God had in its fourth week.

The film also took in another $21.6 million overseas this weekend to bring its foreign total up to $197.4 million. Its global total now stands at $290.7 million.

…the 8th-best in North America…

…and the 6th-best worldwide:

While it may or may not end up behind Disneynature’s Bears, Noah was bumped down the top ten by three other newcomers this week:

Heaven Is for Real, based on the Todd Burpo best-seller and heavily promoted to the “faith-based market”, earned $21.5 million this weekend and has earned $28.5 million since Wednesday, which is better than some people were projecting.

It ranked #3 for the weekend, behind Captain America: The Winter Soldier, which has been #1 for three weeks now, and Rio 2, which is now in its second week.

Transcendence, meanwhile, earned only $11.2 million this weekend, which is one of the lowest wide openings for a Johnny Depp film since the first Pirates of the Caribbean made him a significant box-office draw eleven years ago.

A Haunted House 2 also opened in the top ten this week, with $9.1 million.

God’s Not Dead continued to show remarkable staying power in its fifth week, with a drop of only 13.3% to 22.4% since last week, depending on the estimate.

The film, which was made for only $2 million, has earned about $48 million so far in North America, and it has presumably earned some money overseas too — it opened in the UK this weekend and it is also playing in some Latin American territories as well — but Box Office Mojo does not have any foreign figures for the film yet.

Son of God is beginning to see some foreign action too.

Box Office Mojo did not have any foreign figures for the film last week, but their chart now indicates that Son of God began its overseas roll-out on April 2. The film has so far earned $3.4 million overseas, which, combined with the $59.4 million it has earned in North America, brings its worldwide total up to $62.9 million.

Here in North America, the film didn’t get much of an Easter weekend bump, despite the fact that Paul Lauer sent out an e-mail telling people “Holy Week is the perfect time to honor our Lord and Savior, Jesus Christ, by going to see SON OF GOD.”

The film, which originally opened in 3,260 theatres back in February, did expand from 481 to 905 theatres last week, for Palm Sunday, but it had dropped back down to 503 theatres by Good Friday. It saw slight declines in attendance on both weekends.

April 19, 2014
Flashback: The films made by Alex & Stephen Kendrick
Next Post

April 21, 2014 The Battle of the Bible Films -- the article's up!
Recent Comments
0 | Leave a Comment
""AD" stands for "Anno Domini", a Latin expression meaning "In the Year of Our Lord".So ..."
Peter T Chattaway The Chosen — season one, episode ..."
"Why does it say at the start of episode 3 that it takes place 26 ..."
Desiree Chamberlain The Chosen — season one, episode ..."
"What about Hellboy, The Grudge, Ghoulies, and Anaconda?"
45th Spiderbob Group VGCP When R-rated franchises go PG-13 …
"Not yet, but I might do something like that once Season 2 is complete."
Peter T Chattaway The Chosen — season one scripture ..."
Browse Our Archives
get the latest from
FilmChat
Sign up for our newsletter
POPULAR AT PATHEOS Entertainment
1