The Battle of the Bible Films — the article’s up! 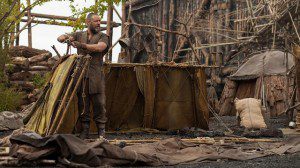 My article on the Bible-movie revival is now up at the Christianity Today website; it will also be in the print edition of the magazine. The article looks at the fitful attempts made by the studios to cash in on the success of The Passion of the Christ since it came out a decade ago, it looks at the three Bible movies coming out this year — Son of God, Noah and Exodus: Gods and Kings — and it looks at what might be next if Noah and Exodus are big-enough hits. It also includes soundbites from publicist Jonathan Bock, director Darren Aronofsky (Noah) and screenwriters Stuart Hazeldine (Paradise Lost, Gods and Kings) and Barbara Nicolosi (Mary).

April 20, 2014
Box-office update: Noah might get edged out of the top ten, Heaven Is for Real does better than expected, Son of God and God's Not Dead begin to see some action overseas
Next Post

April 21, 2014Terminator: Genesis starts filming, plus some cast updates
Recent Comments
0 | Leave a Comment
"I certainly hope to! Just haven't had the time to do Season 2 yet."
Peter T Chattaway The Chosen — season one scripture ..."
"Hi Peter.Thanks for this extensive list. Will you be doing the same for all seasons? ..."
Meelperd The Chosen — season one scripture ..."
"I have neither noticed that much. I recenty read a leadership book inspired from Cyrus ..."
Hamid Mortazavi Cyrus the Great — a Persian ..."
""AD" stands for "Anno Domini", a Latin expression meaning "In the Year of Our Lord".So ..."
Peter T Chattaway The Chosen — season one, episode ..."
Browse Our Archives
get the latest updates from
FilmChat
and the Patheos
Entertainment
Channel
Related posts from FilmChat

Entertainment
Hosea at the movies: three films and a...
FilmChat
TRENDING AT PATHEOS Entertainment