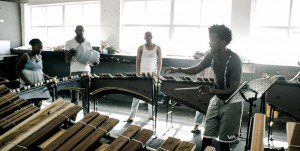 Last September, I noted that Mark Dornford-May’s short film Unogumbe, based on Benjamin Britten’s Noye’s Fludde, had its world premiere at the Toronto International Film Festival. The film has continued to play at festivals since then — appearing at the Berlinale in February, for example — but it has not, to my knowledge, played anywhere near me yet, nor am I aware of any plans to distribute the film, even online.

The Boston Globe now has an article on the film which, interestingly enough, is not tied to any screening of the film in that city but, rather, was prompted by a live performance of Britten’s opera by a local choir this weekend.

After a brief nod to that upcoming performance — and another brief nod to the opera’s appearance in Wes Anderson’s Moonrise Kingdom (2012) — the story turns to a phone interview with Unogumbe’s musical director:

A more recent film takes the piece in an even more unusual direction. “Unogumbe — Noye’s Fludde” was made last year by the South African theater group Isango Ensemble, which takes Western artworks and re-creates them in ways that speak to the country’s township culture. In the case of “Noye’s Fludde,” that means the vocal parts are sung in Xhosa, Noah is a woman and his “wife” a man, and the score is played by an ensemble of percussion instruments. The 33-minute film is a delight, and the setting in a South African township gives the story an extra quantum of moral force.

The idea, he said, had come from the Britten-Pears Foundation itself, which was looking for groups to take on projects during the centennial year and had liked some of Isango’s earlier work. The group looked at a few of Britten’s works and decided on “Noye’s Fludde” in part because of its biblical roots, “so everyone can relate to it. But it’s also a story of great hope, and so when we looked at it as a company, we sort of instinctively gravitated toward that.”

The most radical change in “Unogumbe” from the original is the gender switch. “A lot of families in South Africa, they’re tended to by women,” Dyantyis explained. “We wanted to highlight the fact that a lot of kids in South Africa are brought up by single mothers.” In the film, Noah’s husband is a drunken layabout who almost can’t be bothered to board the ark — now a submarine-like contraption — and save himself.

“It’s an easy thing to say, ‘the father this, the father that,’ ” Dyantyis added. “But in many instances, men don’t pull their weight. And we wanted to show that.”

Asked what kind of story “Unogumbe” is telling, how it makes “Noye’s Fludde” relevant for their culture, Dyantyis said, “We look at the world today, with the excess of everything, and people who have a lot and people who have nothing, that gap. And we sort of looked at it like, if God would come today, clearly that’s one of the things God would sort out. The waste — there are people who are watering their gardens, stuff like that, whereas [another] person doesn’t have enough to drink. So maybe God is irritated with waste, with global warming, with all these things that are happening. And that’s why he would bring the flood.”

As for the music, it sounds shockingly natural when arranged for marimbas and other percussion instruments. Dyantyis said that he tries to stick as closely to the score as possible, and in doing so, “a lot of things will fit themselves in.” He teaches his arrangements to members of the ensemble both by ear and by writing out notated parts — whatever method will best convey the urgency of the narrative.

“We get into the story. And we make the story important, we make what we want to say about this piece of music important. And in teaching the ensemble, I always try to preserve this, to say, sing [this part] like this. At the end of the day, you should tell a story when you’re singing it.”

Here is the trailer for Unogumbe that I posted last year:

You can also watch Dornford-May’s previous films on Netflix, at least in some countries: U-Carmen e-Khayelitsha (2005) sets Georges Bizet’s opera Carmen in the present day, and Son of Man (2006) does the same with the life of Jesus.

April 4, 2014
Be as wise as serpents, but stay away from snakeskins!
Next Post

April 6, 2014 Box-office update: Captain America sets a record for April, Noah drops 61%, and God's Not Dead stays strong
Recent Comments
0 | Leave a Comment
Browse Our Archives
get the latest from
FilmChat
Sign up for our newsletter
POPULAR AT PATHEOS Entertainment
1