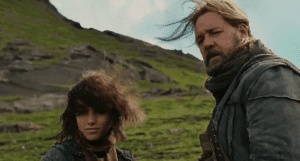 Paramount announced today that Darren Aronofsky’s Noah has grossed $300 million worldwide since it first opened in Mexico and South Korea on March 21.

The Hollywood Reporter notes that Noah is the fourth-highest-grossing film of the year worldwide so far, behind Captain America: The Winter Soldier ($586.7 million), The Lego Movie ($441.7 million) and 300: Rise of an Empire ($329.2 million).

The Reporter also has some stats on how Noah is doing in specific countries, and it notes that 3D is very popular in some of those territories:

In North America, Noah has earned nearly $100 million to date. The film has done more than double that overseas, fueled by outstanding performances in Russia ($32.8 million) and Brazil ($23.4 million), where Noah is the top-grossing Paramount release of all time. Other notable territory grosses to date include Mexico ($15.5 million), South Korea ($14.3 million), the U.K. ($13.1 million) and Australia ($10.7 million).

Deadline adds that Noah has been “the No. 1 film in Poland for four weeks straight.”

There are still some countries that have not yet seen the film, most notably Japan, which won’t get the film until June.

Another country that hasn’t got the film yet is the Philippines, though the reason there has nothing to do with distrbution plans or religious controversy. Instead, the Philippine Daily Inquirer says the film is “the first casualty in a courtroom battle” between two companies who claim distribution rights to the film.

Finally, this week Pepperdine University posted two videos from a presentation given by Paramount vice chairman Rob Moore just before the film came out in March.

In the first video, Moore relives some of the controversies that swirled around Noah in February and March — many of which feel like ancient history now:

The second video includes an interesting moment at the 20:35 mark, when Moore takes a question from one of the producers of God’s Not Dead, who wants to know if Paramount will ever make films with an explicit ministry objective like, well, his:

April 22, 2014
How the movie Heaven Is for Real contradicts the book
Next Post

April 23, 2014 Paramount and MGM team up for the Ben-Hur remake
Recent Comments
0 | Leave a Comment
"In 1972, yes. The movie was made in 1956 but the ratings system didn't exist ..."
Peter T Chattaway One of the reasons I do ..."
"And to think... this movie was rated G? It was."
Bishop One of the reasons I do ..."
"John 7:5 states explicitly that the brothers of Jesus did not believe in him, at ..."
Peter T Chattaway The Chosen starts shooting its second ..."
"Thanks. There is a whole other anecdote in between those two verses. Other relatives, sure, ..."
tmirus The Chosen starts shooting its second ..."
Browse Our Archives
get the latest from
FilmChat
Sign up for our newsletter
POPULAR AT PATHEOS Entertainment
1