The Vancouver Sun posts its list of the best Jesus movies 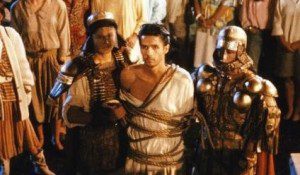 Douglas Todd, the religion and ethics reporter for The Vancouver Sun, has an article in today’s paper looking at the top five films about Jesus, the top five films with a “metaphorical Christ”, and the top five films “with Christian themes.” I was one of four people he consulted — the others include my friends Ron Reed and Darrel Manson, as well as theologian Marjorie Suchocki, who I have never met — and Todd quotes two of the blurbs I’ve written on Jesus films, including this one on Monty Python’s Life of Brian (1979) and this one on The Miracle Maker (2000). You can read the print edition of Doug’s article here, and the blog version here.

April 18, 2014Noah news round-up: Oscar buzz & an environmental panel
Recent Comments
0 | Leave a Comment
Browse Our Archives
get the latest from
FilmChat
Sign up for our newsletter
Related posts from FilmChat