Watch the trailer for short-film anthology Words with Gods 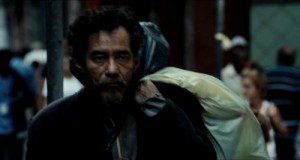 Last summer, I passed along some news about an upcoming short-film anthology called Words with Gods. Produced by Guillermo Arriaga and featuring music by Peter Gabriel, the anthology consists of several short films about religion directed by filmmakers like Hector Babenco, Mira Nair and Emir Kusturica. The film sounds interesting as it is, but I am especially intrigued because Israeli director Amos Gitai is contributing a short film that will be based in some way on the Book of Amos.

The film doesn’t seem to have a release date yet, but according to a press release, there will be “sneak peeks” at “various cinematic events in the U.S. and Europe” beginning next month. In the meantime, a trailer started making the rounds this week:

This trailer is not entirely new, as it happens; it turns out a very, very similar — but not quite identical — trailer was posted four months ago:

You can read more details about the film, what its makers hope to accomplish with it, and how they plan to follow it up in the aforementioned press release.

April 11, 2014
On asking questions, not assuming answers, about Noah
Next Post

April 13, 2014 Box office update: Noah slips in N. America but stays strong overseas, while God's Not Dead sets a new record
Recent Comments
0 | Leave a Comment
Browse Our Archives
get the latest from
FilmChat
Sign up for our newsletter
POPULAR AT PATHEOS Entertainment
1