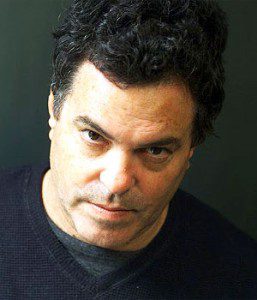 Don’t know how I never heard of this before, but it turns out nine directors from around the world are contributing to an upcoming film about religion called Words with Gods.

The film, an anthology of short movies, is the brainchild of Mexican filmmaker Guillermo Arriaga, who wrote films like Babel (2006) and The Three Burials of Melquiades Estrada (2005) before getting into the director’s chair for The Burning Plain (2008).

I first became aware of the new film when The Hollywood Reporter announced today that Peter Gabriel has signed on to write the music for it. A quick bit of Googling soon revealed that one of the nine directors involved in the project is Amos Gitai (pictured above), and that his contribution is called ‘The Book of Amos’.

This intrigues me, not only because I’m a connoisseur of Bible films in general, but also because Gitai, an Israeli, has directed two of the more interesting feature-length films in this field, namely Esther (1986) and Golem: The Spirit of Exile (1992).

The former film, as I recall, was set mostly in the past but had some modern elements as well, while the latter film set the Book of Ruth in present-day France. So I cannot help but wonder if ‘The Book of Amos’ will be based on the Bible too and, if so, to what degree it will mix modern and biblical elements.

A 15-month-old article in Haaretz, written when Gitai was shooting his contribution to the anthology, gives us a hint or two:

Gitai said Arriga approached him a few weeks ago to direct a short film on the subject of God. “I told them I’m not religious, but what I love about the biblical text is that it is critical… For example, King David, who was very much admired, is presented in the Bible as an immoral person because he desired Bathsheba and therefore he sent Uriah into battle. The greatness of the biblical editor is that he chose not to take that out, so people would see that it’s alright to criticize the monarchy.”

Gitai said he chose to focus on Amos for the same reason his parents chose that name for him, because Amos criticized the bourgeoisie. “He called the bourgeoisie ‘fat cows of Bashan,’ who oppress the poor and the downtrodden. The film ‘Book of Amos’ is my chance to pay homage to this text,” Gitai said.

Sounds interesting, at any rate — and not just because Amos is one of those biblical texts that is almost never translated to film in some way.

The film, which will also feature contributions by Emir Kusturica, Mira Nair and Hector Babenco, does not currently have a distributor, but the producers hope to premiere it at one of the major festivals before releasing it in 2014.

Oh, and speaking of Amos Gitai and Peter Gabriel, they both have something in common: They both used an Armenian folk tune on the soundtrack to a 1980s Bible flick. Gitai actually used it first, in Esther; two years later, Gabriel added some percussion and played the very same tune over the opening credits to The Last Temptation of Christ (1988). Think they’ll use it again in the new film?

June 30, 2013Black Nativity -- the teaser is now online
Recent Comments
0 | Leave a Comment
""AD" stands for "Anno Domini", a Latin expression meaning "In the Year of Our Lord".So ..."
Peter T Chattaway The Chosen — season one, episode ..."
"Why does it say at the start of episode 3 that it takes place 26 ..."
Desiree Chamberlain The Chosen — season one, episode ..."
"What about Hellboy, The Grudge, Ghoulies, and Anaconda?"
45th Spiderbob Group VGCP When R-rated franchises go PG-13 …
"Not yet, but I might do something like that once Season 2 is complete."
Peter T Chattaway The Chosen — season one scripture ..."
Browse Our Archives
get the latest from
FilmChat
Sign up for our newsletter
POPULAR AT PATHEOS Entertainment
1