Noah comes to DVD, Blu-Ray and digital streaming in July 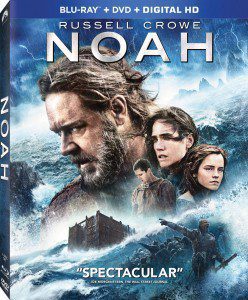 Get ready to watch the fountains of the deep burst forth from the comfort of your living room. Paramount’s home-video department announced today that Darren Aronofsky’s Noah will be available for streaming via Digital HD on July 15, and it will be released on DVD and Blu-Ray on July 29. The Blu-Ray combo pack will include over an hour of special features, including ‘Iceland: Extreme Beauty’, ‘The Ark Exterior: A Battle for 300 Cubits’ and ‘The Ark Interior: Animals Two By Two’. It doesn’t sound like the film will have an audio commentary, so who knows, I may need to record my own; there’s certainly lots to talk about. Oh, and no, it does not appear that the 3D version will be released in North America — though you can always import it from overseas.

May 27, 2014
Robert Redford may play Oral Roberts in a movie about the protégé who stopped believing in Hell
Next Post

May 29, 2014 Walter Salles to co-produce Noah's Ark cartoon in Brazil
Recent Comments
0 | Leave a Comment
"Not yet, but I might do something like that once Season 2 is complete."
Peter T Chattaway The Chosen — season one scripture ..."
"Is there a PDF or printable version of this extensive list? I would love to ..."
Liza The Chosen — season one scripture ..."
"What a strange article. Using movies as your basis to defend that Lazarus was murdered ..."
Mark Ross DeFazio The death, resurrection, and second death ..."
"Another with Ethiopian eunuch and Philip https://archive.org/details..."
Jason McKahan Watch: Philip is the original vanishing ..."
Browse Our Archives
get the latest from
FilmChat
Sign up for our newsletter
Related posts from FilmChat