Box-office update: Edge of Tomorrow “wins” or “loses” the week depending on how you look at it, and more 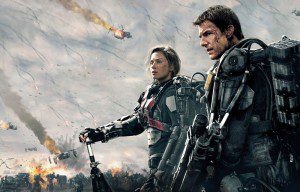 Depending on how you look at it, Edge of Tomorrow either “won” or “lost” at the box office this past weekend.

Edge of Tomorrow also didn’t fare too poorly when you compare its North American opening to those of other films starring Tom Cruise or Emily Blunt. Excluding cameos, the only film of Blunt’s that opened bigger (and even then, not by much) was the 2010 remake of The Wolfman, while the opening ranked eighth for Cruise out of the nearly 40 films that he has made, behind three Mission: Impossible movies, two Steven Spielberg movies, Interview with the Vampire and last year’s Oblivion.

God’s Not Dead earned $172,280 in its twelfth week, landing it in the #26 spot and raising its domestic total to just over $60 million. It has earned another $1.6 million overseas for a worldwide total of $61.6 million.

Moms’ Night Out earned $156,759 in its fifth week, landing it in the #27 spot and raising its domestic total to $9.9 million. It has earned an extra $52,112 in Australia but does not appear to have been released in any other countries overseas.

Noah earned $93,834 in its eleventh week, landing it in the #30 spot and raising its domestic total to just over $101 million. It has earned another $244.6 million overseas, for a worldwide total of $345.6 million. That number will get a boost when the film opens in the Philippines tomorrow and in Japan this Friday.

And finally, for the first time since it came out in late February, Son of God does not appear on the weekly box-office chart at all. The film, which had earned $59.7 million in North America and another $8.1 million overseas, came out on DVD last week. If sales figures have been made available anywhere, I have not seen them yet.

Next week another “faith-based” film will join these films somewhere on the box-office chart. Alone Yet Not Alone — which was at the centre of a major controversy when its Oscar nomination for Best Original Song was rescinded earlier this year — is currently scheduled to open in about 200 cities across North America, including five in Canada (Langley, BC; Calgary and Edmonton, AB; Winnipeg, MB; and London, ON).

June 8, 2014
Sympathy for the snake-haired monster Medusa
Next Post

June 10, 2014Noah gears up for release in Japan and the Philippines
Recent Comments
0 | Leave a Comment
"This was a refreshing read. I'm an average fan of Hellboy but I'm also a ..."
Andrew Mathews Doug Jones on Hellboy and Christianity.
"Great interview! One thing I've wondered since watching Season 1 is why they didn't include ..."
A.J. Cattapan Interview: The Chosen writer-director Dallas Jenkins ..."
"Earth actually does exist in the Dark City universe. Early in the film when John ..."
Edward Clint Dark City and the ambiguous ending.
"I don't always agree with your opinions, but your reviews are never less than interesting ..."
Laura-Lee Rahn The top-grossing Italian movie of 2019: ..."
Browse Our Archives
Follow Us!

The Chosen -- pilot episode
The sources, themes, and historical and theological issues raised by the new...
view all Entertainment blogs
What Are Your Thoughts?leave a comment
Copyright 2008-2020, Patheos. All rights reserved.