Thirteen things about the Alone Yet Not Alone kerfuffle

Thirteen things about the Alone Yet Not Alone kerfuffle February 4, 2014 Peter T. Chattaway 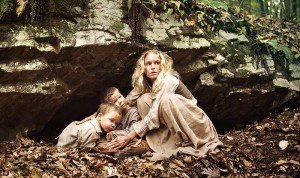 There has been a lot of sound and fury over the past six days as industry insiders and pundits of all kinds respond to the Academy’s decision to rescind the Oscar nomination for ‘Alone Yet Not Alone’, the title song to a small Christian film that almost no one had heard of until a few weeks ago, but which will now have ample fodder for its publicity campaign when it gets a wider release later this year.

I wrote about the rescindment last Wednesday, within hours of it being announced, but I figured it would be good to both take a step back and look at the film’s background, on the one hand, and summarize what the fallout has been since the Academy’s decision, on the other hand. Here, below, is a point-form summary.

What is Alone Yet Not Alone?

The film is an adaptation of a novel by Tracy Leininger Craven about a family of German immigrants whose two daughters are captured by Native Americans during the Seven Years War, known in America as the French & Indian War.

Who made Alone Yet Not Alone?

The film appears to have been backed by far-right activists known as dominionists or reconstructionists, some of whom are active within the home-schooling movement. Vision Forum founder Doug Phillips, who resigned last year following an admission of sexual impropriety, plays a colonel in the film — but his name is not listed on the film’s IMDb page, which has led to speculation that he might be edited out of the film before it comes out in June. Two of his children are still listed as cast members.

Who wrote the title song?

The song is loosely based on a Lutheran hymn (‘Allein, Und Doch Nicht Ganz Allein’) that played a significant role in Craven’s book. Apparently, instead of using the actual hymn, one of the film’s producers, Ken Wales, commissioned a new song written by Bruce Broughton and Dennis Spiegel, who had worked with Wales on the Billy Graham film The Prodigal (1983). Unlike a lot of Oscar-nominated songs that only play over the closing credits of a film or some such thing, this song was written before the film was shot because of its central role in the story. As Broughton told Studio System News, “The film really revolves around that song and how it’s used.”

What else have these guys written?

Broughton got his start as a composer by writing music for Salvation Army brass bands, and he had worked in television for about a decade before he scored The Prodigal, which was his first feature. Two years later, he wrote the score for Silverado (1985), which was nominated for an Oscar. He has worked on mostly mainstream or secular projects since — winning nine Emmys and other awards along the way — though he did score another Billy Graham film, Last Flight Out (2004). Spiegel, for his part, has written the lyrics for a number of songs in TV and film, and he won an Emmy for his contribution to the HBO movie Cast a Deadly Spell (1991).

How did the song qualify for an Oscar nomination?

The film, which was shot in 2010, played at a theatre in Los Angeles for one week in 2013, thereby qualifying it for this year’s Oscars. The title song was one of 75 songs from 50 movies that qualified for the Best Original Song award, and it was the music branch of the Academy that selected the five nominees from that list.

Why did the music branch select this song?

You’d have to ask the 240 members of the music branch.

What was the industry’s reaction to the nomination?

A lot of head-scratching, to be sure. It was quickly noted that Broughton is a former high-ranking member of the Academy himself, and that the film’s score is by William Ross, who also has Academy connections; and thus, some observers said the song’s nomination, rather than evidence of how independent films can get ahead in Hollywood, was evidence of how inside-clubby the Oscars can be. Someone involved with one of the 70 songs that did not get nominated hired a private investigator to dig up dirt on the film, perhaps in the hope that the song would be disqualified and another would be allowed to take its place. In that case, the anonymous accusers charged that the film had failed to meet the Academy’s requirement that advertising be purchased for the film’s one-week qualifying run in theatres — but the Academy ruled that the showtime listing purchased by the theatre met this requirement.

Why did the Academy rescind the nomination, then?

In a statement released last Saturday, the Academy gave its fullest explanation yet for the reasons behind the disqualification. They noted that each member of the music branch received a DVD with the 75 qualifying songs, and that these songs were identified by title and film only, to discourage “favoritism”. Academy president Cheryl Boone Isaacs also noted in an interview with The Hollywood Reporter that “no one else, other than people in the music branch, would have this reminder list with the number, the eligible song and the title”. Broughton sent an e-mail to at least 70 members of the music branch in which he identified which of the songs was his by number, thereby taking advantage of information that no one outside the music branch would have had, and thereby breaking the Academy’s rules.

How often has the Academy rescinded a nomination before?

As many as ten times, depending on how one defines these things. Usually these rescindments and revocations have taken place in relatively lower-profile categories involving small films, documentaries or foreign films. However, one or two screenplays lost their nominations in the 1950s, and in 1973 the Academy held a revote and removed Nino Rota’s score for The Godfather from the ballot when it was discovered that he had re-used music from one of his earlier films. (Ironically, two years later Rota actually won an Oscar for the Godfather sequel.)

How did the filmmakers respond to the rescindment?

Broughton told The Hollywood Reporter he was “devastated” and added: “I indulged in the simplest grassroots campaign and it went against me when the song started getting attention.” He later wrote an open letter suggesting that Isaacs has “breach[ed] the same standard” that he did in her work as a consultant on films like The Artist and The King’s Speech. George Escobar, one of the film’s producers, wrote on Facebook: “This is STUNNING News. An injustice. Read. Share. Pray. Forgive.” Wales told Christianity Today the Academy’s decision “seems unfair because they did not apply this scrutiny to anything else that has had a lot more questionable persuasion techniques and advertising.” Joni Eareckson Tada, who sings the song over the closing credits of the film but did not write it (and was thus not nominated herself), told the Los Angeles Times: “If it was for reasons connected with a faith-based message, it shouldn’t surprise us that Hollywood would shun Jesus. Jesus has been shunned by much weedier characters. . . . And the rescinding of the nomination doesn’t detract from [the] song’s beauty or message. I hope it brings more attention to it.”

What did the professional Oscar watchers think of the rescindment?

Tim Gray at Variety suggested three ways the Academy could improve things: clarify the campaigning rules (it may have been wrong for Broughton to promote his film personally, but what about a third-party publicist?), overhaul the music branch, and invite Tada to perform the song at the Oscar ceremony as a goodwill gesture. Scott Feinberg at The Hollywood Reporter asked if “sending a few emails” was “a more egregious form of campaigning than taking out ‘For Your Consideration’ ads in print and on television or hosting large, lavish receptions at which the famous singer(s) of a nominated song perform it live”. He also suggested that the Academy could have simply declined to invite the nominated composers to the Oscar show, the way they declined to invite one of the producers of The Hurt Locker after he sent e-mails to some Academy members disparaging a rival film a few years ago.

How have other industry insiders responded to the rescindment?

Gerald Molen, the Oscar-winning producer of Schindler’s List and the first two Jurassic Parks (he also produced Dinesh D’Souza’s 2016: Obama’s America), wrote a letter to Isaacs in which he didn’t quite say the Academy’s decision was “faith-based bigotry pure and simple” but he did say “many” would see it that way. Don Davis, composer for the Matrix trilogy and an Academy member himself, started a petition to have the song’s nomination restored, writing: “Any personal correspondence some of us may have received from the artists involved was miniscule in comparison to the deluge of email, print and recorded promotion that we received from every studio production for every possible nomination.” John Debney, an Academy member whose credits include The Passion of the Christ, wrote on Facebook: “Finally, a song from a small film barely seen, was deemed worthy of nomination. That is the way it should work. But alas, the winds of PC and cronyism seem to be at work here.”

How have Christians outside the industry responded to the rescindment?

My fellow Patheos blogger Craig Detweiler told Christianity Today the rescindment had nothing to do with the film’s Christian background but, rather, reflected the disadvantages that all low-budget films face: “It’s permissible to buy influence through industry events, screenings and advertising, but not to solicit members directly. This is not necessarily an attack on a particular type of film or filmmaker but rather an admission that the small independent film — without a massive advertizing budget — has a very difficult time attracting the academy’s attention, nomination, or votes.” Meanwhile, “Dr.” Ted Baehr’s Movieguide organization has invited Tada to perform the un-nominated song at their “Teddy Bear Awards” ceremony this Friday.

Update: Tada gave an interview to Breitbart News in which she made comments similar to the ones she made in the Los Angeles Times — but this time, she is quoted as saying that Jesus was shunned by much “weightier” figures than the ones in the entertainment business. That makes a lot more sense to me than “weedier”.

February 3, 2014
A few thoughts on the whole Woody Allen situation.
Next Post

February 5, 2014Joseph and the amazing Technicolor animated film
Recent Comments
0 | Leave a Comment
"What about Hellboy, The Grudge, Ghoulies, and Anaconda?"
45th Spiderbob Group VGCP When R-rated franchises go PG-13 …
"Not yet, but I might do something like that once Season 2 is complete."
Peter T Chattaway The Chosen — season one scripture ..."
"Is there a PDF or printable version of this extensive list? I would love to ..."
Liza The Chosen — season one scripture ..."
"What a strange article. Using movies as your basis to defend that Lazarus was murdered ..."
Mark Ross DeFazio The death, resurrection, and second death ..."
Browse Our Archives
get the latest from
FilmChat
Sign up for our newsletter
POPULAR AT PATHEOS Entertainment
1