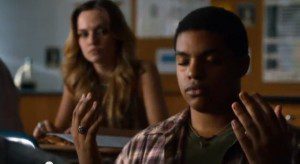 HBO has released a second trailer for The Leftovers, the Rapture-themed series that premieres June 29.

The most striking thing about this trailer, to me at least, is the fact that it begins with people praying for the return of those who vanished a few years earlier.

I honestly can’t recall if I have ever seen that in a Rapture movie before. Most Rapture movies work from the premise that those who vanish have left this world for good — and the people who make those films tend to assume that all of the characters would share this belief. The possibility that the Christians and others who are “left behind” might not share this assumption simply doesn’t occur to them.

So, that’s one more thing that makes The Leftovers instantly more interesting — or more potentially interesting, at any rate — than most other entries in this genre.

I posted the first trailer last month, along with the second teaser. The first teaser, which HBO released in April, appears to have been removed from YouTube since then.

Incidentally, if you’re interested in the history of Rapture films, the earliest specimen of which I am aware is this short film directed by Charles Baptista in 1941:

When I posted that film to Facebook the other day, a friend alerted me to the existence of a 1952 film called The Missing Christians — but this one is almost an hour long, and the acting in the first few minutes is so bad (as is the audio-visual quality) that I haven’t made time to watch the rest of it yet. Still, if you’re interested, here it is:

So for those of my generation who thought this all started in 1972 with A Thief in the Night and its sequels — nope, it goes back even further than that!

Speaking of which, here’s that series:

June 10, 2014
Noah gears up for release in Japan and the Philippines
Next Post

June 14, 2014 Ridley Scott's Moses movie not quite done filming yet
Recent Comments
0 | Leave a Comment
""AD" stands for "Anno Domini", a Latin expression meaning "In the Year of Our Lord".So ..."
Peter T Chattaway The Chosen — season one, episode ..."
"Why does it say at the start of episode 3 that it takes place 26 ..."
Desiree Chamberlain The Chosen — season one, episode ..."
"What about Hellboy, The Grudge, Ghoulies, and Anaconda?"
45th Spiderbob Group VGCP When R-rated franchises go PG-13 …
"Not yet, but I might do something like that once Season 2 is complete."
Peter T Chattaway The Chosen — season one scripture ..."
Browse Our Archives
get the latest from
FilmChat
Sign up for our newsletter
POPULAR AT PATHEOS Entertainment
1