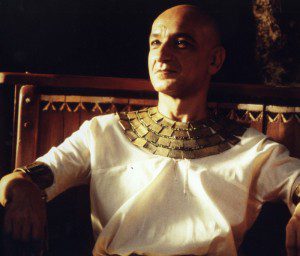 Ben Kingsley can’t get enough of ancient Egypt, it seems. First he starred in the 1995 TV-movies Joseph and Moses, playing Potiphar and Moses respectively. Soon we will see him play a Pharaoh in Night at the Museum: Secret of the Tomb and the father of Joshua in Exodus: Gods and Kings (both coming in December). And now, as of today, the word on the street is that Kingsley will have a major part in the Spike TV miniseries Tut. Kingsley, who is 70, definitely won’t be playing the titular Pharaoh Tutankhamun, who died when he was about 18. Instead, he will play “Ay, the grand vizier to King Tutankhamun, who wields tremendous power and influence as the top advisor to the young Egyptian ruler.” The miniseries will shoot in Morocco and Canada (!) in the fall, and will air sometime next year.

July 13, 2014
Will the crocodiles in Exodus: Gods and Kings be another nod to The Prince of Egypt?
Next Post