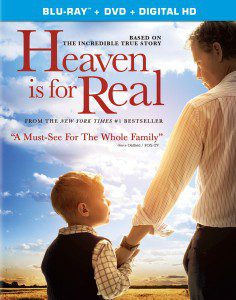 The first thing you notice, when you pop the Heaven Is for Real disc into your player, is the trailers. Four of the five trailers that kick things off are for “faith-based” films of one sort or another, all of them co-produced by Sony’s Affirm Films division. (The films in question are When The Game Stands Tall, Moms’ Night Out, Courageous and Soul Surfer.) But nestled in the middle of that pack is a trailer for… The Amazing Spider-Man 2. One of these things is not like the other, right?

The funny thing is, the inclusion of that ad makes perfect sense — and not just because the Spider-Man films are also distributed by Sony. If you’ve seen Heaven Is for Real, then you know that Colton Burpo, the boy whose near-death experience the film is all about, has a toy Spider-Man. Indeed, the book on which the film is based mentions this toy a few times, and on page 33, the toy is explicitly described as “Colton’s favorite toy, his Spider-Man action figure.” (The bulk of the book takes place in 2003, i.e. one year after the first Spider-Man film.)

So the presence of Spider-Man on this disc isn’t just a case of corporate synergy. Even so, the inclusion of this detail, combined with the exclusion of other, more pertinent details from the book, serves as a helpful reminder that this film is no mere independent Christian film, but reflects a major studio’s effort to cater to the “faith-based” market while appealing to the broadest possible audience.

I don’t have much to say about the film itself that I didn’t already say in my three-month-old post ‘How the movie Heaven Is for Real contradicts the book’. But the Blu-Ray does come with about half an hour’s worth of bonus features — less than that, if you get the DVD only — and I wanted to make a few comments about them.

First, the deleted scenes include a funeral service attended by just a few people, including Colton and his dad. This caught my attention because, in my previous post on the film, I noted that the Colton of the book came out of his near-death experience adamant that people had to “have Jesus in their hearts” or else they couldn’t go to heaven — and that he got particularly anxious about this issue when he even heard about upcoming funerals — whereas the Colton of the film shows no interest in this question whatsoever. Not surprisingly, in this deleted scene, the Colton of the film sits there silently while a woman says she didn’t know the man in the coffin but she hopes a newspaper article about Colton’s experience gave the man “hope”.

There’s another scene in which the character played by Thomas Haden Church (who also played one of the villains in Spider-Man 3, as it happens!) tells Todd Burpo (i.e. Colton’s dad, played in the film by Greg Kinnear) that he loves how Todd’s sermons “point us to something better that’s full of hope and love and most importantly faith.” Something about the dialogue there rings false to me; the language is very vague and generic. Is this how actual churchgoing Christians discuss their shared faith?

I might also take issue with the idea that faith is the “most important” thing. When St Paul first grouped faith, hope and love together in I Corinthians 13, he said love, not faith, was “the greatest of these”. This might sound like just nitpicking on my part, but it seems to me that “faith” is increasingly used in some quarters as a euphemism for having the right beliefs, or belonging to the right group of people, etc. The word itself sounds positive, but it means different things to different people, and when I hear people talk about “faith-based” markets and the like, I can’t help but think that it has become a divisive word, a ghettoized word that encourages ghettoized thinking.

Turning to other bonus features, I did appreciate how ‘The Making of Heaven Is for Real’ draws attention to the bright, colourful cinematography, and how writer-director Randall Wallace and producer Joe Roth say they wanted to suggest that there is something “miraculous” and even heavenly about Earth itself. Our awareness of heaven, in other words, should not allow us to shrug off this world as though it ultimately didn’t matter; instead, it should encourage us to appreciate this world more deeply than we already do. That’s one message I can get behind, at least.

There is also a brief featurette on ‘Colton Goes to Heaven’, featuring the Burpo family themselves. The real-life Colton, now 15, says heaven is “like the perfect version of Earth.” And his mother Sonja says Colton’s visions have strengthened the family’s faith, and they “validate what we believe in.” It’s just a shame that neither the film nor disc goes into any further detail as to what, exactly, those beliefs might be.

August 12 update: I was walking through a Walmart yesterday and discovered that they sell a retailer exclusive edition of the Blu-Ray that comes with a bonus disc that contains the featurette ‘Meet the Family that Inspired Heaven Is For Real.’

While looking for information on this featurette, I discovered that Vudu also has six bonus features that are exclusive to that streaming service: ‘The Burpos: 11 Heavenly Years Later’, ‘Heart of the Movie’, ‘Answers’, and three ‘Religious Leader Vignettes’ featuring Christine Caine, Reverend Sam Rodriguez and Dick Rolfe.

July 26, 2014 "Drug dealers, money launderers, and kidnappers": Esquire looks at what happened to Benedict Fitzgerald and his proposed prequel to The Passion of the Christ
Recent Comments
0 | Leave a Comment
""AD" stands for "Anno Domini", a Latin expression meaning "In the Year of Our Lord".So ..."
Peter T Chattaway The Chosen — season one, episode ..."
"Why does it say at the start of episode 3 that it takes place 26 ..."
Desiree Chamberlain The Chosen — season one, episode ..."
"What about Hellboy, The Grudge, Ghoulies, and Anaconda?"
45th Spiderbob Group VGCP When R-rated franchises go PG-13 …
"Not yet, but I might do something like that once Season 2 is complete."
Peter T Chattaway The Chosen — season one scripture ..."
Browse Our Archives
get the latest from
FilmChat
Sign up for our newsletter
POPULAR AT PATHEOS Entertainment
1