“Drug dealers, money launderers, and kidnappers”: Esquire looks at what happened to Benedict Fitzgerald and his proposed prequel to The Passion of the Christ

“Drug dealers, money launderers, and kidnappers”: Esquire looks at what happened to Benedict Fitzgerald and his proposed prequel to The Passion of the Christ July 26, 2014 Peter T. Chattaway 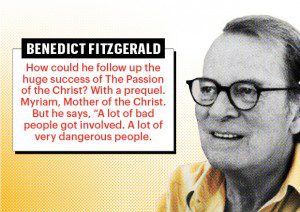 The Passion of the Christ was such a huge hit ten years ago that many people wanted a sequel. Mel Gibson never showed any interest in making one, but his screenwriter Benedict Fitzgerald certainly did — or, to be more precise, Fitzgerald proposed making a prequel about the mother of Jesus, which he initially called Myriam, Mother of the Christ.

I have been keeping tabs on this film ever since it was first announced in January 2007, but the film itself has never been made. Instead, there have been persistent rumours and reports — the title has changed a couple times, and different actors were rumoured to be up for the part of Herod the Great, etc. — and now comes the wildest, craziest report of them all. Esquire magazine posted a story yesterday with the headline ‘How the Mother of All Sequels Crashed and Burned’, and it explains in some detail how Fitzgerald’s ambitions were derailed by “drug dealers, money launderers, and kidnappers”. It also gets into his lawsuit against Gibson.

The article does have one glaring omission, though. Near the end, it says the current producer attached to the project stopped working on it for a while a few years ago, then ditched Fitzgerald’s script and “recruited” Catholic screenwriting teacher (and former Patheos blogger) Barbara Nicolosi to write a new script from scratch. In actual fact, however, Nicolosi had been involved with the script from the very beginning, indeed since before this producer came on board — in a January 2007 blog post, she said she had already been working on the script for “many months” — and I don’t know whether (or to what degree) she is involved with the project any more.

In any case, the story told by Esquire is a wild one indeed, and I got curious as to how the events it describes line up with the reports that I tracked here at this blog. So here, as best as I can make it, is a timeline that integrates the two things (most of the links go to blog posts of mine; any item without a link is taken from the Esquire story):

May 16, 2006: Fitzgerald signs a financing deal for Myriam, Mother of the Christ with some Mexican investors. Within five weeks — after he tries and fails to get The Passion of the Christ cinematographer Caleb Deschanel to join the project — the investors sue Fitzgerald for fraud and breach of contract.

January 22, 2007: The existence of the script, co-written by Fitzgerald and Nicolosi, becomes public knowledge when MGM acquires distribution rights to the film. The studio is said to be aiming for an Easter 2008 release date.

February 11, 2008: Fitzgerald sues Gibson for $5 million, alleging fraud and breach of contract with regard to their collaboration on The Passion of the Christ.

April 1, 2008: Gibson’s lawyers asks the court to seal the financial records for The Passion of the Christ so that only Fitzgerald’s lawyers can see them.

May 2008: Fitzgerald settles with his Mexican investors by giving them the rights to his script for Myriam, Mother of the Christ. On May 27, one of the investors’ younger brothers is kidnapped and held for ransom. The kidnappers want the screenplay.

Sometime in 2008: Hollywood producer Mary Aloe buys the script from the kidnappers for $1 million plus ten points on the gross. She has no idea that the people who sold it to her are kidnapping extortionists.

July 15, 2008: Fitzgerald files a “rewrite” of his lawsuit against Gibson.

September 24, 2008: Nicolosi writes that she has just finished “probably the fifth version of the rewrite” for the film, which is now called Mary Mother of Christ.

November 21, 2008: Nicolosi writes that she is beefing up the part of Herod at the request of a “major star”, who is later revealed to be Al Pacino.

November 25, 2008: A judge presiding over Fitzgerald’s lawsuit against Gibson orders Gibson to appear for a deposition by mid-January.

November 28, 2008: Nicolosi writes that Mary Mother of Christ “is going ahead in a very graced way. The financing seems to have come together in the last week. A director is attached and it’s out to talent and a shooting date is on the calendar for March.”

December 2, 2008: Nicolosi posts an excerpt from the script to her blog.

February 5, 2009: The cast and director are announced, including Camilla Belle as Mary, Al Pacino as Herod, Jonathan Rhys Meyers as Gabriel/Lucifer, Peter O’Toole as Symeon and Jessica Lange as Anna the Prophetess, with Alejandro Agresti set to direct.

April 2009: Fitzgerald amends his lawsuit against Gibson in the same week that Gibson’s wife Robyn files for divorce after 28 years of marriage (and almost 3 years of separation).

August 5, 2009: Mary Mother of Christ gets a new director — James Foley — and a couple new actors as well, including Diogo Morgado as Joseph and Julia Ormond as Elizabeth. (Morgado will eventually go on to play Jesus in The Bible and its big-screen spin-off Son of God.) Principal photography is now slated for October.

Sometime in 2010: The DEA launches “a wide-ranging federal indictment” against the two Mexican kidnappers, one of whom flees the country and is still at large, the other of whom pleads guilty and is sentenced to four years in prison. (He gets out later this year.) Among the possessions seized by the US government are the rights to ten percent of the gross or profits of Mary Mother of Christ.

Sometime in 2011: Aloe becomes aware of the dodgy background of the men who sold her the script when DEA agents approach her as part of their investigation.

Sometime in 2012: Fitzgerald files for bankruptcy.

May 21, 2012: Megachurch pastor Joel Osteen comes on board as executive producer of Mary Mother of Christ. The director attached to the project is now Alister Grierson, and Odeya Rush is set to play Mary.

July 5, 2012: Diogo Morgado, who was once cast as Joseph in Mary Mother of Christ, is cast as Jesus in The Bible. (In a Twitter exchange promoting the miniseries on March 31, 2013, Morgado will go on to say, “I think both Moses and Samson were unique stores, (sic) but I would like to explore the story of Joseph.”)

July 10, 2012: Peter O’Toole announces his “retirement” from acting. Despite this — and despite his death a year and a half later — his name is still frequently brought up in news reports that list Mary Mother of Christ among upcoming Bible movies. He’s even still listed on Aloe’s website as playing the part of Symeon!

September 27, 2012: It is reported that the producers are considering Ben Kingsley for Herod, Judi Dench for Anna the Prophetess and Hugh Bonneville for Satan.

April 17, 2013: A US judge gives one of the original Mexican investors — the one whose younger brother was kidnapped — the ten percent of Mary Mother of Christ’s earnings that the US government had seized from the kidnappers. 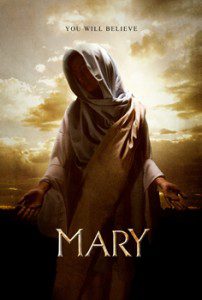 And that brings us more or less up to date.

You’ll notice that there hasn’t been any actual news about Mary for almost two years now — at least not that I’ve noticed — but Esquire says Aloe is still determined to make the film, and it notes that she has released a poster with a tagline and the shortest title yet: the single word Mary. She also hopes to release it in April, just in time for Easter — but that’s only nine months away, and she hasn’t announced a production date yet.

A synopsis posted by Aloe’s company to the film’s IMDb page describes the film as “a linear ticking clock, high action drama, faith based, youth based bio pic.” This, the Esquire article suggests, is in striking contrast to the original Fitzgerald-Nicolosi script, which was “somber and cerebral” and interrupted the action sequences with “verbal sparring between the Archangel Gabriel and the fallen angel Lucifer.”

It’s also striking to see the single word “Mary” replace the original title’s “Myriam”. I always thought Fitzgerald had picked that name to distance his film from the accusations of anti-Semitism that dogged The Passion of the Christ, and the Esquire article indicates I wasn’t that far off the mark. In fact, Fitzgerald thought the name “Myriam” would allow for common ground between all three of the Abrahamic faiths, because Myriam is very similar to the name by which the Koran refers to the mother of Jesus (which Wikipedia transliterates as “Marīam” or “Maryam”).

In January 2007, it was said that the film would follow Mary’s story as far as “the holy family’s journey from Egypt to Nazareth following the death of King Herod.” But the IMDb synopsis indicates that the film, which starts when Mary is 13, will follow her story until she is 27 and her son is 12, which suggests it will include the bit about Jesus staying behind at the Temple while Mary and Joseph head back to Nazareth.

Regarding Fitzgerald himself, the article reveals that he received less royalties for The Passion of the Christ than a typical screenwriter would have received because he was living in Italy, and was thus not eligible for the standard Writers Guild of America pay scale, when he signed his contract with Gibson’s production company.

The article also reveals that Fitzgerald finished his first draft of The Passion of the Christ on September 11, 2001 — and that he didn’t notice what was happening on the news until after he e-mailed the script to Mel Gibson’s company. I can relate: on that very same day, I woke up early to finish an article that was due that morning, and I ignored the e-mails my friends were trading, with the puzzling subject lines about New York City etc., until after I had finished the article and sent it via e-mail. Then I took a look at my friends’ e-mails, and then I turned on the TV. Feels weird to think that Fitzgerald, sitting somewhere in Italy, had just done the very same thing.

I’m a bit puzzled by the claim that Fitzgerald persuaded John Huston to come out of retirement to direct Wise Blood, the 1979 film based on the novel by Flannery O’Connor, who happened to be Fitzgerald’s former babysitter. Huston’s last feature film prior to that, The Man Who Would Be King, came out only four years earlier, and he directed a film nearly every year after that until his death in 1987. Then again, that four-year gap was the longest gap between features in Huston’s filmography.

And… those are the major things I learned from the Esquire article. But there are plenty of other interesting details in it too. Read the whole thing.

August 6 update: The title on the Esquire story is now ‘The Greatest Story Never Told’. That is also its title in the print edition of the magazine. The original web version of the article can still be seen at archive.org.

July 27, 2014The Bible and Son of God: just how different are they?
Recent Comments
0 | Leave a Comment
Browse Our Archives
get the latest from
FilmChat
Sign up for our newsletter
POPULAR AT PATHEOS Entertainment
1