The Bible and Son of God: just how different are they?

The Bible and Son of God: just how different are they? July 27, 2014 Peter T. Chattaway 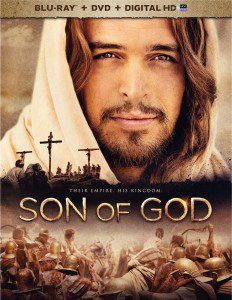 If you’re the sort of person who has wondered just how much overlap there was between The Bible and its big-screen spin-off Son of God, have I got the spreadsheet for you!

The advantages of this format are twofold: First, you can compare the relative lengths of the two versions of any given scene; more often than not, the movie tightened things up a tad, but every now and then the movie padded things out by adding elements that were missing from the miniseries. And second, because the movie added some scenes, deleted some scenes, and rearranged some other scenes, you can select either column and list all the scenes from one version of the film in the order in which they appeared in that version.

But the timecodes tell only part of the story. I was surprised to see just how subtly different some of the edits were within any given scene as I watched the film and the miniseries side-by-side. Not only does the movie trim things out and tuck them in, but it also cuts from one angle to another earlier or later than the miniseries did, or it replaces one insert shot with another, and so on, and so on.

Seriously, watching the two versions of any given scene side-by-side was slightly disorienting, because no matter how closely I’d line them up at any given point, they’d be out of alignment one way or the other within seconds. And then sometimes they’d line up again just a few seconds after that.

The movie tends to be more linear than the miniseries: the scene with the Magi going to Bethlehem is no longer cross-cut with Herod yelling at his advisers (which is cut from the film altogether), and the scene of Jesus giving Peter a big catch of fish is no longer cross-cut with the imprisonment and execution of John the Baptist (which is also cut from the film altogether). But the movie also adds some cross-cutting, by interweaving the flogging of Jesus with the suicide of Judas.

For the most part, the movie and the miniseries follow the same order, but there are two significant exceptions to this rule. First, of course, is the prologue featuring the elderly St John on Patmos as he prepares to narrate the rest of the movie in flashback; this prologue is taken from the very end of the miniseries.

Second, and more significantly, the film spreads the Pilate footage around somewhat differently, so that he is much more prominently the antagonist of the film. The scene where he orders a cart tossed off the road to make room for his entourage is extended so that his men no longer just toss a cart off the road, but kill one of its passengers as well. Similarly, his wife’s dream that he will execute Jesus now appears much, much earlier in the story, and thus seems less like a reaction to whatever was in the air during that one Passover season and much more like a prophecy.

The first time I saw Son of God, I remarked to one of the church leaders promoting it that it didn’t feel all that different from the miniseries. He replied by assuring me that there was, in fact, a lot of new footage in the movie. Well, I count only about five minutes’ worth of new scenes, with maybe another five minutes or so of extra footage in the extended scenes, for a grand total of around ten minutes. But the film has certainly been tweaked and re-edited more thoroughly than I suspected.

Finally, I have also put a few columns in the spreadsheet for scripture references, but I haven’t really filled them out yet. To be honest, I’m still wavering between having a single column for all of the scripture references and having multiple columns — one for each book in the New Testament — so that you can re-sort the scenes according to which gospel they’re based on. But that’s another job for another day.

Like I say, the spreadsheet is a work-in-progress. So if you want to double-check it and offer any corrections or propose any changes to it, then by all means, let me know!

July 26, 2014
"Drug dealers, money launderers, and kidnappers": Esquire looks at what happened to Benedict Fitzgerald and his proposed prequel to The Passion of the Christ
Next Post

July 30, 2014Noah on Blu-Ray: some quick notes on the bonus features
Recent Comments
0 | Leave a Comment
Browse Our Archives
get the latest updates from
FilmChat
and the Patheos
Entertainment
Channel
POPULAR AT PATHEOS Entertainment
1