Noah on Blu-Ray: some quick notes on the bonus features 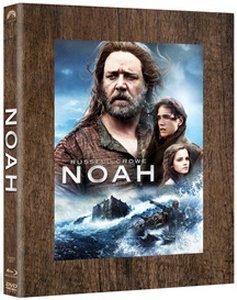 The Noah Blu-Ray is here — and with it, a bunch of behind-the-scenes stuff that we have never seen before. Here are some quick notes on the bonus features.

First, a reminder that different editions of the film come with different bonus features.

Also, three bonus features are apparently included if you purchase the film directly from iTunes (if you use iTunes to get the free “digital copy” that comes with your disc, you won’t get any bonus features, just the film), but one of the iTunes bonus features is actually from the Target disc and not from the regular Blu-Ray.

Confused yet? I’ll try to sort it all out below.

First, the two bonus features that appear on all versions of the Blu-Ray and in iTunes:

Iceland: Extreme Beauty. The filmmakers started by shooting exteriors in Iceland for five weeks — and even some interiors, if you count Methuselah’s cave, which was apparently a real, bona fide cave and not an artificial set.

Director Darren Aronofsky says he wanted to film on land that was as new as possible, and that meant shooting on volcanic terrain rather than in a desert or some such thing. Production designer Mark Friedberg notes that the land may actually be a bit more ambivalent than that, since volcanoes also signify destruction, and he says that fits since the whole film basically revolves around the question of whether the Flood is primarily about the end of the old world or the beginning of a new one.

One of the more bizarre revelations here — which will no doubt give the film’s enemies that much more reason to dismiss it — is that the crew made “daily offerings” to the “Icelandic elves” to keep them happy: singing songs, burning incense, and so on. All tongue-in-cheek perhaps, but still, there it is. Interestingly, however, when the filmmakers capture a shot of a genuine rainbow near the end, Aronofsky is awestruck, and when one of the crew reflexively thanks the elves, Aronofsky replies, “I don’t know if that’s the elves. That’s someone else. That’s the Creator, right there.”

The Ark Exterior: A Battle for 300 Cubits. This featurette covers the exteriors that were shot in New York, including the massive Ark set and the massive rig that was built for the simulated rain. Just as this film set a record for the most complex visual-effects shot ever rendered by ILM, because of all the fur-bearing computer-generated animals, so too it set a record for the most fake rain in a single shot.

Naturally, there is some discussion regarding the design of the Ark, and co-writer Ari Handel describes it as “just a raft with a roof,” because it’s designed simply for survival and not like a boat that was meant to take people on a journey to a destination. Handel adds: “It’s a much more passive, trapped, imprisoned situation.”

We also get to meet Vera Fried, the teacher who inspired Aronofsky to become a writer many years ago. She has a cameo in the film as a one-eyed crone pointing her finger accusingly at Noah, and we see Aronofsky direct her in the scene.

Next, the bonus feature that is on all versions of the Blu-Ray but not in iTunes:

The Ark Interior: Animals Two by Two. After wrapping exteriors in Iceland and on Long Island, the filmmakers shot the interiors on a set that was built in an armoury in New York City — and while Handel described the Ark as a “prison” in the previous featurette, Aronofsky, who is apparently tired of having to deal with bad weather and the like, says he feels “completely safe and protected” on the indoor set.

This featurette includes some really interesting concept art (including one of a glowing Adam — or is it Eve? — reaching up for the forbidden fruit) and some discussion of the film’s moral themes, much of it courtesy of Handel and Ray Winstone, who plays the villain Tubal-Cain. Winstone, in particular, asks if Noah is really the good guy for wanting to “cull” his own species, but he also notes that Tubal-Cain, as a stand-in for the sort of people who rationalize our own exploitation of the world, represents “the voice of so-called reason” — which is to say, it isn’t as rational as it thinks it is.

This featurette also includes two bits of deleted footage, both of which involve Tubal-Cain. In one, he gets Ham to hold his busted leg while he swings a hammer down on it, talking all the while about how it takes a strong will to survive, etc. And in the other, during Tubal-Cain’s climactic confrontation with Noah, he rams home the film’s association of Tubal-Cain with modern industrialization by saying, “You watched mankind perish. All their creations, all their innovations.”

Next, the bonus feature that is on the Target disc and in iTunes:

Special Makeup FX on Noah. Surprisingly, perhaps, this featurette looks not just at the makeup effects, but also at the various animatronic animals that were designed for the film (some, but not all, of which were later replaced with CG). I’d venture to say that there’s a lot more about the movie’s animals in this featurette than there is in the featurette that has the words ‘Animals Two by Two’ in the title.

Finally, the three bonus features that are exclusive to the Target disc:

The Watchers. Possibly the one bonus feature that I was most eagerly anticipating was this look at how the Watchers — the “rock monsters” who are also referred to here as the Nephilim — were conceived, designed and animated, including a brief look at the ballet dancers who did some motion-capture work for the characters.

I confess that when I first saw the film, I found the whole “rock monster” concept kind of been-there-done-that, cinematically speaking — the Watchers certainly weren’t portrayed that way in the original script or graphic novel — but it’s interesting to hear the rather unusual route by which the filmmakers ended up there.

This featurette also includes another deleted sequence from the film in which the rains begin and one of the Watchers says to the others, “The Creator weeps.” The shot is fully animated, so it must have been deleted fairly late in the game, alas.

Noah’s Score. Mostly a collection of fly-on-the-wall footage of Clint Mansell, the Kronos Quartet and Patti Smith working in the recording studio. I’m a little disappointed that there are no interviews here — I would have loved to hear Mansell explain some of his unusual musical choices — but, as one who has listened to the soundtrack frequently over the last four months, I did enjoy hearing snippets of certain musicians and vocalists isolated from the rest of the score.

The Sounds of Noah. A look at how the various audio effects were created for the film, including the bags of rocks that provided the sounds that accompanied the Watchers as they walked around and moved their arms.

A couple other comments:

Each of the featurettes begins with a quote from Genesis, but for some reason the ancient text that we see in the background behind those quotes is written in Greek or Coptic or some such alphabet — definitely not Hebrew.

Also, for the sake of some of the more sensitive viewers out there, I should note that the bonus features do include a bit of coarse humour, as when Russell Crowe explains the meaning of “pulling your tit” (cf. “pulling your leg”), the filmmakers discuss how to fit a prosthetic leg on Winstone without touching his “knob”, and so on.

Finally, I would have liked to see some more discussion of the religious elements in the film. Possible featurettes could have looked at the Jewish traditions that informed the film, or they could have profiled the film’s “biblical advisor”, etc.

Ah well. Perhaps when the film gets re-issued for its fifth or tenth anniversary.

You can watch five brief clips from the featurettes here, and check the list of videos at the bottom of that post for links to other behind-the-scenes features.

July 31, 2014 He's Pharaoh! He's Moses! He's somebody else entirely! Ben Kingsley talks Exodus, appears in Night at the Museum trailer
Recent Comments
0 | Leave a Comment
"Not yet, but I might do something like that once Season 2 is complete."
Peter T Chattaway The Chosen — season one scripture ..."
"Is there a PDF or printable version of this extensive list? I would love to ..."
Liza The Chosen — season one scripture ..."
"What a strange article. Using movies as your basis to defend that Lazarus was murdered ..."
Mark Ross DeFazio The death, resurrection, and second death ..."
"Another with Ethiopian eunuch and Philip https://archive.org/details..."
Jason McKahan Watch: Philip is the original vanishing ..."
Browse Our Archives
get the latest from
FilmChat
Sign up for our newsletter
POPULAR AT PATHEOS Entertainment
1