Amazon gets into the Bible genre with the series Kingdoms

Amazon gets into the Bible genre with the series Kingdoms September 19, 2014 Peter T. Chattaway 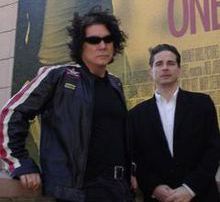 Is the world ready for two TV shows based on the Book of Acts? Mark Burnett and Roma Downey have been developing A.D., their follow-up to The Bible, for over a year now, though there has been very little news about it since it was first announced. And now it may have competition. Deadline reports that Ian Sander and Kim Moses, producers of shows like Reckless and Ghost Whisperer, have set up a drama series at Amazon called Kingdoms, which will tell “the biblical saga of the Apostles – 12 ordinary men who clashed with the power and wealth of three kingdoms to change the world forever.” The show will be written by Roderick Taylor and his son Bruce, who have a bit of experience with “faith-based” material, as they wrote the script for The Surrogate, a thriller based on a book by Christian novelist Kathryn Mackel that Christian filmmaker Ralph Winter was going to produce a few years ago. Their best-known produced screenplay is probably The Brave One, a Death Wish-style vigilante flick starring Jodie Foster.

September 18, 2014
Toby Kebbell in talks to play Messala in Ben-Hur remake
Next Post

September 22, 2014 Newsbites: A.D.! Ben-Hur! Wilde Salomé!
Recent Comments
0 | Leave a Comment
"This was a refreshing read. I'm an average fan of Hellboy but I'm also a ..."
Andrew Mathews Doug Jones on Hellboy and Christianity.
"Great interview! One thing I've wondered since watching Season 1 is why they didn't include ..."
A.J. Cattapan Interview: The Chosen writer-director Dallas Jenkins ..."
"Earth actually does exist in the Dark City universe. Early in the film when John ..."
Edward Clint Dark City and the ambiguous ending.
"I don't always agree with your opinions, but your reviews are never less than interesting ..."
Laura-Lee Rahn The top-grossing Italian movie of 2019: ..."
Browse Our Archives
Follow Us!