Toby Kebbell in talks to play Messala in Ben-Hur remake 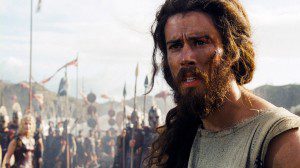 Variety reports that Toby Kebbell is in “early talks” to play Messala, the Roman officer who betrays the title character, a former friend of his, in the upcoming remake of Ben-Hur. The part was played by Francis X. Bushman in the 1925 film, Stephen Boyd in the 1959 film and Stephen Campbell Moore in the 2010 miniseries. Kebbell has played a number of bad guys lately, in films like Dawn of the Planet of the Apes and the upcoming Fantastic Four reboot, and he has dipped his toe in the Greco-Roman genre via Wrath of the Titans and Oliver Stone’s Alexander. Kebbell joins Jack Huston, who is playing the part of Judah Ben-Hur himself, and Morgan Freeman, who will play the charioteer-training Ildarin.

September 19, 2014 Amazon gets into the Bible genre with the series Kingdoms
Recent Comments
0 | Leave a Comment
"In 1972, yes. The movie was made in 1956 but the ratings system didn't exist ..."
Peter T Chattaway One of the reasons I do ..."
"And to think... this movie was rated G? It was."
Bishop One of the reasons I do ..."
"John 7:5 states explicitly that the brothers of Jesus did not believe in him, at ..."
Peter T Chattaway The Chosen starts shooting its second ..."
"Thanks. There is a whole other anecdote in between those two verses. Other relatives, sure, ..."
tmirus The Chosen starts shooting its second ..."
Browse Our Archives
get the latest from
FilmChat
Sign up for our newsletter
Related posts from FilmChat