Go behind the scenes of Exodus: Gods and Kings in a new featurette

Go behind the scenes of Exodus: Gods and Kings in a new featurette September 3, 2014 Peter T. Chattaway 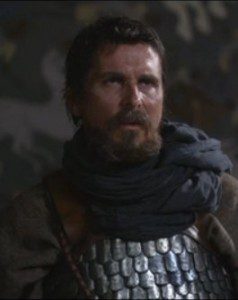 With less than three months to go before the film premieres overseas, Yahoo! Movies has released the first behind-the-scenes clip for Ridley Scott’s Exodus: Gods and Kings. It’s called ‘The World’ and it focuses on director Ridley Scott and production designer Arthur Max, both of whom explain how they went about making what might be the biggest film of their careers.

In addition to the usual behind-the-scenes stuff — actors doing their thing in front of greenscreen backdrops, etc. — the clip includes two shots from the film that were not included in the trailer. Interestingly, however, the dialogue in those shots was heard in the original trailer. Check it all out below the jump.

First, here is the behind-the-scenes clip itself:

And here are the two new shots, in which Moses approaches a sword-bearing Ramses — in an apparently otherwise empty room — and tells him, “I came to tell you that something is coming that is out of my control”:

Here, as best as I can make it, is a transcript of what Scott and Max say:

Ridley Scott: First of all, it’s epic in scale. And second of all, the Moses story was a massive challenge, which I really love. I wanted to explore the complexity of his character, and I was stunned by the giant lifespan story, and what he went through. The idea they were brothers, and then rivals, and then later go to war with each other, was very interesting. The process of creating this film, it’s really difficult.

Arthur Max: It’s an immense production. Everything is as big as we can build, but at the same time, Ridley has bigger ideas in mind.

Ridley Scott: What attracted me to the material is I felt there was a beauty to the massive scale. You’re working with at least 700 crew, plus the 4,000 extras, and of course the army will be expanded exponentially. Four thousand will be tiled and grown into 20,000.

I have to say, this featurette doesn’t really give me a very good sense of what the movie will be like.

We already know Ridley Scott is great at battle sequences, and that the film will begin with a battle sequence against the Hittites. (Just to be clear: I don’t mind the inclusion of non-biblical battle sequences from Moses’ days as an Egyptian prince. There’s a precedent for this in the writings of Josephus, among other things.)

Still, no need to worry just yet. There are almost three months to go, after all.

September 5 update: There is a YouTube version of this featurette now:

The movie’s Facebook page has also posted a GIF based on this featurette:

Check out my shot-by-shot analysis of the trailer here:

September 2, 2014
That studio that made Cloudy with a Chance of Meatballs is now working on an animated movie about the first Christmas
Next Post

September 4, 2014 Interview: Blake Rayne (The Identical, 2014)
Recent Comments
0 | Leave a Comment
""AD" stands for "Anno Domini", a Latin expression meaning "In the Year of Our Lord".So ..."
Peter T Chattaway The Chosen — season one, episode ..."
"Why does it say at the start of episode 3 that it takes place 26 ..."
Desiree Chamberlain The Chosen — season one, episode ..."
"What about Hellboy, The Grudge, Ghoulies, and Anaconda?"
45th Spiderbob Group VGCP When R-rated franchises go PG-13 …
"Not yet, but I might do something like that once Season 2 is complete."
Peter T Chattaway The Chosen — season one scripture ..."
Browse Our Archives
get the latest from
FilmChat
Sign up for our newsletter
POPULAR AT PATHEOS Entertainment
1