The Exodus: Gods and Kings trailer: a shot-by-shot analysis (lots and lots of horses, and a tip of the hat to Simple Minds)

The Exodus: Gods and Kings trailer: a shot-by-shot analysis (lots and lots of horses, and a tip of the hat to Simple Minds) July 8, 2014 Peter T. Chattaway 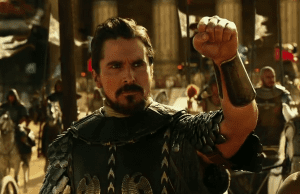 The first trailer for Exodus: Gods and Kings is here — and it’s pretty much what you’d expect. Spectacular images (which will no doubt look even better in 3D), an enormous sense of scale, and hints of a brotherly love between Moses and Ramses that turns sour when Moses and his God turn against the Egyptians and their gods to liberate the Hebrew slaves. Oh, and horses. Lots and lots of horses. You can check it all out below the jump.

And now for the shot-by-shot analysis.

The trailer — which has 48 shots, not counting company logos and title cards — begins ominously, with Moses (Christian Bale) stepping through a shadow as Ramses (Joel Edgerton) says, in voice-over, “You say that you didn’t cause all this.”

We then get a shot of Egyptian chariots underneath some very dark clouds:

A close-up of Ramses, as his voice-over continues: “You say this is not your fault.”

A foreman of some sort stands at the edge of a giant quarry, filled with slaves:

Ramses continues, “So let’s just see who’s more effective at killing.” The shot of Moses’ partly-covered face might be from a different scene altogether:

We see the Egyptians riding into battle (in a historically inaccurate cavalry charge!), culminating in a shot of Moses stabbing a man on the ground:

It’s not clear to me that the audio and the video are from the same scene here, so it’s possible that the dialogue is a voice-over continuation of Ramses’ thought from the previous soundbite, which Ramses uttered while wearing different clothes.

A title card tells us “From Ridley Scott”, as a female voice sings the first words from ‘Belfast Child’, a song by Simple Minds (“When my love said to me…”), and we get a glimpse of a massive construction project that the Hebrew slaves are working on:

A close-up of Moses as Seti (John Turturro) says, “Moses…”

And a close-up of Ramses as Seti says, “Ramses..”

A flashback to one of the princes when he was a baby, as Seti continues in voice-over, “When I look at you, I still see the two boys who grew up together…”

Moses and Ramses smile at each other and tap the tips of their swords together in Seti’s presence, as the singer continues, “Meet me down by the gallow tree…”

One final smile, as Seti says in voiceover, “Close as brothers.”

A title card tells us Scott is “The Director of Gladiator,” and we then see Moses and Ramses prepare to lead the Egyptian chariots, while the singer continues, “Some say troubles abound / Some day soon they gonna pull the old town down…”

Note, incidentally, the way Ramses looks to the side here while Moses looks straight ahead. This suggests, I think, a character dynamic similar to the one we saw in The Prince of Egypt, where Ramses is clearly the heir to the throne and yet he looks up to Moses, or looks to him for the confidence that he, Ramses, somehow lacks.

We then see Moses prevent Ramses from chopping someone’s hand off:

A shot of the Egyptian queen Tuya (Sigourney Weaver):

Moses holds a sword to Ramses’ throat (this never happened in the other movies!) and says, “I came here to tell you that something’s coming…”

Horses ride into the storm:

We see Moses in prison, as his voice-over continues, “…that is out of my control.”

Ramses stands in the hailstorm, one of the ten plagues that God sent to Egypt:

A couple images of general mayhem:

Moses steps purposefully into some water (at the Red Sea, I presume?):

A man stands in a bloody river — the first of the plagues — and, perhaps significantly, pours water that is already bloody out of a container and into the river.

Did the man get this water from the river itself, or did he get it from somewhere else? If the latter, then this may resemble the scene in the 1956 version of The Ten Commandments where Ramses tries to “cure” the Nile by pouring holy water into it, only to be shocked when the water from the jar turns bloody in mid-pour.

We then see several shots of chariots in motion — and this sequence probably mixes shots from opposite ends of the movie. (The film begins with the Egyptians battling some Hittites under the leadership of Moses and Ramses, and of course it will probably climax with Ramses pursuing the Hebrews to the Red Sea.)

Hey, look, another horse — and it’s dwarfed by a magnificent wall of water!

And that’s the trailer, all 97 seconds of it (minus the title cards).

Most of the soundbites are stretched across several shots, so for convenience’s sake, here are all the dialogue clips stitched together:

The choice of ‘Belfast Child’ is also interesting. The song was written in response to the religious conflicts in Northern Ireland, and Scott has been quite frank about the fact that he thinks religion is “the biggest source of evil” because of all the wars it starts. In fact, he made this point in an interview two years ago literally just a few seconds before he revealed that he was working on a movie about Moses:

RS: And the biggest source of evil is of course religion.
ES: All religions?
RS: Can you think of a good one? A just and kind and tolerant religion?
ES: Not off the top of my head, no.
RS: Everyone is tearing each other apart in the name of their personal god. And the irony is, by definition, they’re probably worshipping the same god.
ES: You know what would be awesome? You need to make a film adaptation of a Bible story.
RS: Oh, yeah.
ES: Maybe the Virgin birth? No movie’s ever told that story with enough gloopy, viscous afterbirth.
RS: No, I’ve got something else in the works. I’m already doing it. It’s called Moses.
ES: You’re kidding.
RS: Seriously, seriously. It’s going to happen.
ES: With all apologies to Charlton Heston, that sounds like it’s going to be the most amazing film about Moses ever made.
RS: It is. I probably shouldn’t have let that slip out. I’m not supposed to say anything.

So it’s interesting to see how this trailer does not automatically lend itself to a triumphalist view of the Moses story, in which “our” guy successfully defeats “their” guy; nor does the trailer suggest that Moses is emotionally conflicted by what is happening to the Egyptians, the way he was in The Prince of Egypt. Instead, between the Simple Minds song and the torment felt by Ramses, we are invited to mourn the devastation that happens when two religions duke it out for supremacy.

I am also intrigued by these lyrics that aren’t used in the trailer:

All my life here I’ve spent
With my faith in God, the Church and the Government
But there’s sadness abound
Some day soon they gonna pull the old town down

Scott, an avowed atheist or agnostic, has said before that he was drawn to the Moses story not necessarily because he was drawn to the character’s monotheism, but because Moses stood up against the polytheism of the Egyptians who raised him. (As Scott put it: “Moses rises against the thousands of Egyptian gods in the name of one god. This is a very modern idea.”) So just as the person singing ‘Belfast Child’ may be losing faith in the religio-political order, so too Ramses may be undergoing a crisis of faith as his gods are powerless to put a stop to the Hebrews and their leader.

Anyway, them’s my first thoughts. Let me know if you have any others!

July 11 update: Scott discussed the trailer with Empire magazine, and while he didn’t comment on the lyrics to ‘Belfast Child’ at all, he did say this about the melody, which comes from the Irish folk song ‘She Moved through the Fair’: “Yes, it’s an Irish riff. It’s completely illogical. It comes out of the blue. And because it feels modern it somehow gives you lift off. No relevance. It just works. I still think advertising is a knee jerk thing. Once you’ve got the attention you’ve got them, haven’t you?”

July 8, 2014
Ridley Scott signs on to produce a movie about King David
Next Post

July 10, 2014 Are Exodus: Gods and Kings -- and other Moses movies -- picking on Ramses II unfairly?
Recent Comments
0 | Leave a Comment
""AD" stands for "Anno Domini", a Latin expression meaning "In the Year of Our Lord".So ..."
Peter T Chattaway The Chosen — season one, episode ..."
"Why does it say at the start of episode 3 that it takes place 26 ..."
Desiree Chamberlain The Chosen — season one, episode ..."
"What about Hellboy, The Grudge, Ghoulies, and Anaconda?"
45th Spiderbob Group VGCP When R-rated franchises go PG-13 …
"Not yet, but I might do something like that once Season 2 is complete."
Peter T Chattaway The Chosen — season one scripture ..."
Browse Our Archives
get the latest from
FilmChat
Sign up for our newsletter
POPULAR AT PATHEOS Entertainment
1