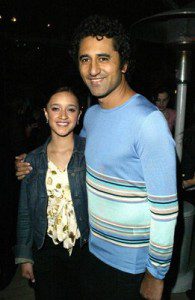 The father becomes the son…

Now comes word that Curtis may — may — be playing Mary’s son Jesus in Clavius, in which a Roman centurion investigates reports of the Resurrection.

It’s all speculation at this point. But Thompson on Hollywood, speaking to Curtis about another film at the Toronto film festival, mentions that Curtis is something of a method actor, and that he refuses to talk during interviews right now (though he will gesture with his hands and write notes on his laptop) because he is currently playing “a man of God … who speaks only of God,” in Curtis’s words.

The interviewer then says: “Word has it that man is Jesus Himself.”

If the rumour is true, then it is further evidence of how filmmakers are trying to think beyond the conventional blond-hair-and-blue-eyes depictions of Jesus of the past.

Curtis would, to my knowledge, be the first actor of Maori descent to play Jesus.

Interestingly, one of his Clavius co-stars, Selva Rasalingam, has also played Jesus in a series of films produced as part of the Lumo Project, and he is half-Tamil.

Speaking of Clavius, Tom Felton, who is playing someone named Lucius, has posted a few new pictures from the set to his Instagram account. Behold:

September 11, 2014
Morgan Freeman to play an Arab sheikh in Ben-Hur?
Next Post

September 15, 2014 Our first look at the Genesis-themed The Red Tent
Recent Comments
0 | Leave a Comment
Browse Our Archives
get the latest updates from
FilmChat
and the Patheos
Entertainment
Channel
POPULAR AT PATHEOS Entertainment
1