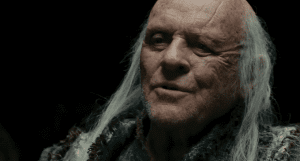 Methuselah, who was recently played by Anthony Hopkins in Darren Aronofsky’s Noah, wasn’t the only man in the Bible who lived to be over 900 years old. But he lived at least a few years longer than everyone else, so his name has become synonymous with extreme old age.

No one ever tells stories about Seth, Enosh, Kenan or Jared — all of whom lived to be over 900 years old as well — and the fact that Adam and Noah lived to be that old is generally forgotten in films about those characters. It is Methuselah that everyone remembers, simply because he lived longer than any of the rest of them.

Science-fiction writers have had some fun with this. The Star Trek episode ‘Requiem for Methuselah’ imagined that Methuselah — or someone very much like him — actually lived for thousands of years and assumed such aliases as King Solomon and Alexander the Great. Presumably there are other stories like this as well.

Now here’s another one for the list. Variety reports that David Heyman, producer of Gravity and the Harry Potter movies, is developing a film called Methuselah, which is described thusly: “Based on the character from the Bible, the story follows a man who ages slowly and has used his time to develop an incredible set of survival skills.”

I have no idea what “based on the character from the Bible” is supposed to mean here. Is he the son of Enoch and the grandfather of Noah? Does he die the same year that the Flood happens? Is the story set in the antediluvian world? Or does he simply have the same name as the biblical character, as well as a tendency to live very long?

Variety says Warner Brothers is pursuing this project partly because of “all the recent interest around characters from the Bible” — but if the story doesn’t actually follow the biblical template at all (and the Bible tells us almost nothing about Methuselah, except that he lived very long), then I don’t see a lot of cross-over appeal, here.

Still, it’s another project to keep an eye on, I guess.

Heyman, incidentally, has been attached to other quasi-biblical films lately, such as adaptations of Reza Aslan’s Zealot: The Life and Times of Jesus of Nazareth and Seth Grahame-Smith’s Unholy Night. He is also the son of John Heyman, who served as a producer on Campus Crusade’s much more traditional Jesus movie in 1979.

October 21, 2014
Exodus: Gods and Kings has a rating, a running time, and a new video of Christian Bale and Joel Edgerton
Next Post