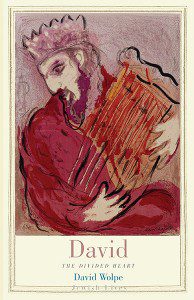 Not too long ago, Warner Brothers and 20th Century Fox were in a race to make a movie about Moses. Eventually Fox gave its film the greenlight — they even stole the title of the Warner Brothers movie, which was never made in the end — and the result was Ridley Scott’s Exodus: Gods and Kings. Now it’s time for a rematch. A few months ago, Fox and Scott announced that they were developing a movie about King David. And now The Tracking Board reports that Warner has optioned the rights to David: The Divided Heart, a book by popular rabbi David Wolpe that examines some of the contradictions in David’s personality. The film, which has the working title King David, is being developed by Matt Phelps and Mike Karz, whose credits include the animated film The Nut Job and the Adam Sandler comedy Blended. Not exactly the most promising of résumés, to be sure, but hey.

October 24 update: Variety also has the story now. They note that Karz attends the Sinai Temple in West Hollywood, where Wolpe is the senior rabbi, and that Kirk Douglas has sent copies of Wolpe’s book to all members of the congregation.

October 22, 2014
Harry Potter producer David Heyman adds Methuselah to his list of unconventional takes on the Bible
Next Post

October 24, 2014 Exodus: Gods and Kings: no "parting" of the Red Sea? Also: Christian Bale says Moses was "likely schizophrenic".
Recent Comments
0 | Leave a Comment
"Whoever wrote this article called Mary a virgin. She was only a virgin till after ..."
Ronnette Harvey The latest attempt to film all ..."
"In addition to this explanation of why "Paul says he can’t tell the Roman Christians ..."
PaulDT Paul, Apostle of Christ: a scene ..."
"Outstanding outline and identification of references and sources as well as background. Thank you so ..."
PaulDT Paul, Apostle of Christ: a scene ..."
"" So now, basically, the Magi are just a substitute for Santa Claus." <- Well... ..."
The 3 Wise Men — not ..."
Browse Our Archives
Follow Us!