Exodus: Gods and Kings has a rating, a running time, and a new video of Christian Bale and Joel Edgerton 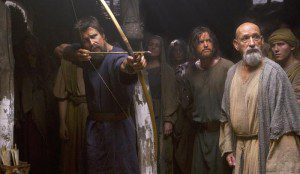 So I’ve been wondering what rating Exodus would get from the MPAA when all was said and done. And now we know: it is rated PG-13 for “violence including battle sequences and intense images”.

Meanwhile, the film’s IMDb page reports that the film will run a whopping 200 minutes, or 3 hours and 20 minutes. If that figure is correct, then Exodus: Gods and Kings will be the longest film that Ridley Scott has ever directed, beating the theatrical record of 157 minutes set by American Gangster and the home-video record of 194 minutes set by the extended roadshow edition of Kingdom of Heaven.

People have asked, here's the answer: running time of Ridley Scott's 'Exodus: Gods and Kings' will be approximately 2 hours 20 mins.

That, of course, is almost the same length that Kingdom of Heaven was when it came out in theatres. So it’s possible that a longer version awaits us on home video.

Below is the rest of the original version of this post.

Also: if that figure is correct, and if Exodus: Gods and Kings comes to an end with the parting of the Red Sea — and everything we’ve seen so far suggests that it will — then it will also be one of the longest treatments of this part of the Moses story ever.

The 1956 version of The Ten Commandments runs 231 minutes altogether, but if you cut out the overture, the Cecil B. DeMille intro, the entr’acte and the exit music, it’s closer to 222 minutes — and about 18 of those minutes concern the Golden Calf episode, the giving of the Law and the death of Moses some 40 years later, all of which take place after the Hebrews have left Egypt. So the actual dramatic content dealing with the crossing of the Red Sea and everything that leads up to it comes to about 204 minutes — just four minutes longer than Ridley Scott’s film is reputed to be.

The longest dramatization of the life of Moses that I know of is the 1974 miniseries Moses the Lawgiver, which runs a whopping 272 minutes without commercials — but the crossing of the Red Sea takes place only 150 minutes into the story. The rest of it follows Moses and the Hebrews through their wandering in the wilderness.

Similarly, the 1995 miniseries Moses starring Ben Kingsley and the 2006 miniseries The Ten Commandments starring Dougray Scott are both about three hours long without commercials, but they place the crossing of the Red Sea halfway through the story, treating it as a sort of cliffhanger at the end of the first episode.

The Prince of Egypt, for its part, basically stops at the crossing of the Red Sea (a single shot of Moses holding the tablets of the Law notwithstanding) and runs 99 minutes.

So much for the rating and technical specs. Now for the new video clips.

The studio released a three-minute clip of Christian Bale and Joel Edgerton discussing the film and their characters via Metro yesterday (note the multiple references to the “uprising” or “revolution” led by Moses), then reposted it at Facebook today — and I think I spotted a couple new shots from the film itself. Here’s the video:

And here are the shots I haven’t seen before, of the Hebrew caravan and Aaron Paul as Joshua walking within it (incidentally, the “camel poop” that Bale and Edgerton find so amusing here was mentioned by Paul himself earlier this year):

This 14-second clip from the interview was also posted to Facebook, and is notable for the fact that it includes three words of Bale’s that are not in the longer video:

October 23 update: The Facebook page has posted another 15-second clip from the longer interview, in which Edgerton describes why he likes the battle scenes:

October 28 update: The Facebook page has now posted a 15-second clip that overlaps with the longer interview but has an extra sentence or two, in which Edgerton describes the relationship between his character Ramses and Moses:

The original three-minute video is now available on YouTube, too:

November 3 update: The Facebook page has posted yet another 15-second clip that overlaps with the longer interview, in which Edgerton discusses the plagues:

November 4 update: The Facebook page has posted yet another 14-second clip that overlaps with the longer interview, in which Bale discusses Aaron Paul’s gag reflex:

November 6 update: The Facebook page has posted yet another 14-second clip that overlaps with the longer interview, in which Edgerton discusses the battle scenes:

November 10 update: The Facebook page has posted yet another clip that overlaps with the longer interview, in which Bale discusses connecting with the audience:

October 17, 2014
Regina Hall to star in a thriller called The Surrogate. Is this identical to the movie Halle Berry almost starred in?
Next Post

October 22, 2014 Harry Potter producer David Heyman adds Methuselah to his list of unconventional takes on the Bible
Recent Comments
2 Comments | Leave a Comment
"I don't always agree with your opinions, but your reviews are never less than interesting ..."
Laura-Lee Rahn The top-grossing Italian movie of 2019: ..."
"Whoever wrote this article called Mary a virgin. She was only a virgin till after ..."
Ronnette Harvey The latest attempt to film all ..."
"In addition to this explanation of why "Paul says he can’t tell the Roman Christians ..."
PaulDT Paul, Apostle of Christ: a scene ..."
"Outstanding outline and identification of references and sources as well as background. Thank you so ..."
PaulDT Paul, Apostle of Christ: a scene ..."
Browse Our Archives
Follow Us!