Exodus: Gods and Kings news round-up: a new “action” featurette and a couple new interviews with the filmmakers 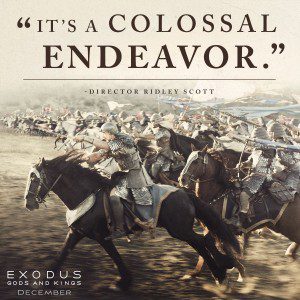 Another Wednesday, another Exodus: Gods and Kings promotional featurette — this time on ‘Creating the Action’.

Once again, the filmmakers emphasize the size, size, size of their movie. In 87 seconds, they use expressions like “a lot”, “a very big-scale production”, “the biggest historic battle that’s ever been”, “the scale of this world we’re in is breathtaking”, “epic” and “a colossal endeavor”.

The video doesn’t seem to be embeddable, but you can watch it over at IGN.com.

Meanwhile, a couple more interviews with the filmmakers have popped up. There isn’t a whole lot new in either of them, but they do have a few interesting quotes.

For example, Yahoo! UK has this interesting section on director Ridley Scott’s efforts to keep this film “accessible” to believers and non-believers alike:

Despite being a “pretty strong agnostic”, he was keen to make sure the film is accessible to people whether they believe in God and the Bible or not.

“I walked a fine line between not being modern – because I think that’s dangerous as well – but acknowledging where we are in 3000BC and making a film I would understand and see,” he says.

But I appreciate Scott’s point, that it would be wrong to impose a “modern” sensibility on this ancient setting. Let’s hope he toes that line successfully.

Second, the Italian website Bad Taste has posted part two of their set-visit report (I linked to part one here), but they don’t say much besides the fact that they witnessed some chariots charging into battle, they saw some photos from earlier in the shoot, and they conducted some interviews that will be posted in the weeks to come.

So, we’ll just have to wait and see if part three of that report, and any parts that come out after that, tell us anything new about the actual film itself.

September 25 update: The featurette is now on YouTube, and thus embeddable:

Also, Scott’s comment about the movie taking place “in 3000 BC” matches a comment he made last week to the effect that the story of the Red Sea parting might have been inspired by an earthquake that took place “in approximately 3000 BC” — though he was probably referring to the eruption of Thera, which took place in 1600 BC.

It will be interesting to see if Scott continues to repeat this “3000 BC” error, the same way he has kept on talking as though the Bible had anything to say about Moses’ relationship with the Pharaoh Ramses. (It never even mentions Ramses.)

September 26 update: And now there is a GIF based on this featurette:

September 25, 2014 Clavius: more pictures and a call for extras in Spain
Recent Comments
0 | Leave a Comment
Browse Our Archives
Follow Us!