Exodus will be a big movie. Not a small movie. A big movie. The studio really wants you to know that.

Exodus will be a big movie. Not a small movie. A big movie. The studio really wants you to know that. September 9, 2014 Peter T. Chattaway 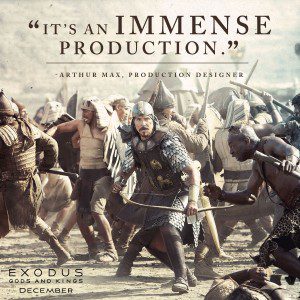 In case you haven’t heard, Exodus: Gods and Kings is going to be big. Huge. Epic. Immense. The most embiggened thing that was ever supersized.

20th Century Fox made that point in a featurette that came out last week. In less than two minutes, the filmmakers used words like “epic”, “massive” (twice!), “giant”, “immense”, “big”, “bigger”, “exponentially” and “biggest” to describe their movie — and now the movie’s Facebook page is posting photos with those size-emphasizing quotes.

There’s Moses, and he’s got his bow out, and the group of soldiers beating up on each other seems appropriately multiethnic — and at the top of it all is a quote from the production designer, who declares, “It’s an IMMENSE production.”

Well, obviously. I think we get that by now. 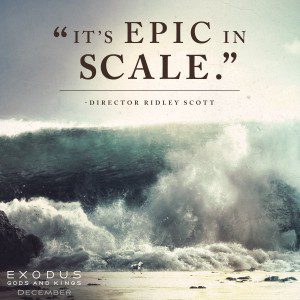 See also this picture that went up last week: the image isn’t new, since it’s taken from the trailer that came out two months ago, but the quote from Ridley Scott reminds us: “It’s EPIC in SCALE.”

I don’t know about you, but all this size-does-matter branding is beginning to remind me of that Monty Python bit in which a minister leads prayer in chapel. If I may revise it: “O movie, you are so big. So absolutely huge. Gosh, we’re all really impressed down here, I can tell you.”

Noah was a big movie — it was about the destruction of the entire world, after all — but the ads were content to let the images speak for themselves, as far as the sheer scope of the movie was concerned. The actual dialogue focused on the movie’s apocalyptic themes and the relationships between the characters, good and bad. And when the featurettes did draw attention to, say, the size of the Ark, they were careful to underscore how the film was being faithful to the dimensions given in the Bible.

So far I get nothing like that from the ad campaign for Exodus. There’s a hint of the character dynamic between Moses and Ramses — once they were “brothers”, now they are enemies — but even that’s pretty barebones. The ads for previous Moses movies played up the filmmakers’ faithfulness to the Bible, or the larger themes that they drew out of the story (e.g. “the birth of freedom,” as Cecil B. DeMille put it). But so far, all I’m getting from the Exodus ad campaign is that the film is big, big, big, big, big.

And, well, that’s not enough.

September 9, 2014
Is there, or will there be, a "church-based" ad campaign for Exodus: Gods and Kings?
Next Post