Exodus news round-up: a set visit, a casting controversy, and who exactly is Ben Mendelsohn playing? 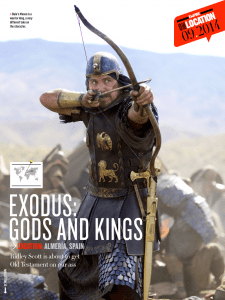 The current issue of Empire magazine has a report from the set of Exodus: Gods and Kings, and while it doesn’t have all that much new information, it does include a few new pictures and a few new details.

For one thing, it confirms that the giant face we saw in the first official photo from the film is meant to be an image of Ramses II, the Pharaoh played by Joel Edgerton — and it adds the detail that this monument is part of a massive new city being built by the Hebrews called Pi-Ramses. So it looks like this film will follow the scholarly convention of equating the biblical city “Rameses”, mentioned in Exodus 1, with the historical Pi-Ramesses.

The article also mentions that the film will feature “seven — count ’em! — plagues and natural disasters”. Only seven? There are ten in the Bible, though this needn’t be an inaccuracy on the film’s part. If memory serves, The Ten Commandments (1956) really only showed three — the water turning to blood, the hailstorm and the death of the firstborn — but it alluded to the others in its dialogue. So it’s certainly possible that Exodus might show “only” seven but allow for the other three somehow.

The natural disasters will apparently include “a big dust storm with giant statues tumbling over and 20-foot columns collapsing,” in the words of production designer Arthur Max. I’m not sure that that fits the description of any plague found in the Bible, but I’m sure it will add to the overall spectacle of the film.

A sidebar also mentions that the filmmakers made use of 400 frogs, presumably while depicting the second plague. The frogs were overseen by six “frog wranglers”.

A recurring theme in the article — and in much of the other coverage that we’ve seen so far — is how vast the scale of the filmmaking is, but also how quickly the filmmakers worked. Ridley Scott himself says at one point that one of the producers “sent me the screenplay last October — fuck me, that’s fast, isn’t it?”

With regard to the new pictures that are included with this article, one of them is at the top of this post, and I’ll add the others at the bottom.

Turning to other news, a controversy is brewing over the fact that the filmmakers have cast Caucasian actors in most of the main roles.

I already addressed this issue four months ago — in a post that was primarily about Noah but also included some comments on Exodus — and I don’t have a whole lot to add to what I said back then. However, I do want to address a few specific points.

First, tweets like the one below have mistaken the face of Ramses for the Great Sphinx of Giza, which was already over a thousand years old before Moses lived:

If you want to compare the giant face in this film to the historical statues of Ramses — or even to the mummified face of the actual historical person! — you can check the pictures at Wikipedia, for starters. But within the film, this monument is supposed to resemble Edgerton, the actor playing Ramses, for better or for worse.

Then there is this tweet, which mistakes the dark-skinned soldiers for “slaves”:

The irony. Coincidence or not. Black actors cast to play slaves #BoycottExodusMovie pic.twitter.com/ImA6jpMVRG

The guards and soldiers are certainly serving the Pharaoh and his family in some capacity, but are they “slaves”? In a movie that is all about Hebrew slaves, presumably none of whom will be allowed to take weapons into the Pharaoh’s palace? I doubt it.

Apparently its ok to animate accurate looking Egyptians, but not ok to cast them live action. #BoycottExodusMovie pic.twitter.com/VIaO3kDaGh

I, too, applaud The Prince of Egypt (1998) for broadening the range of ethnic characterization in Bible films and animated films alike, and for making its characters look as Semitic or Egyptian as possible.

Ironically, however, the actors who provided the voices for all three of the characters above were white — and one could even argue that that film fell back on an entirely different set of stereotypes by casting British actors (Ralph Fiennes and Helen Mirren, in the case of Ramses and his mother) as the Egyptian antagonists and American actors (Val Kilmer, in the case of Moses) as the Hebrew protagonists.

Moreover, a key plot point in nearly every major film about Moses — including, it seems, this new one — has been that he grew up among the Egyptians thinking he was one of them. This means the royal family of Moses’ day cannot look all that different from the Hebrews who were enslaved by them, otherwise it would be painfully obvious that Moses was not one of them. They have to look at least somewhat alike.

Finally, turning to other matters, an alert reader of this blog pointed out to me that the credits for this film, as seen in the trailer that was released last month, give fifth billing to Ben Mendelsohn, an Australian who has appeared with Christian Bale in The New World (2005) and The Dark Knight Rises (2012) and with Edgerton in a variety of Aussie projects going back to 1995, including Animal Kingdom (2010):

The top four credits go to Christian Bale (Moses), Joel Edgerton (Ramses), John Turturro (Seti) and Aaron Paul (Joshua), and then comes Mendelsohn — but who is he playing? The IMDb doesn’t say, nor have any of the reports I’ve read. But presumably it’s a fairly significant character, if he makes the top five.

The reader who pointed this out to me speculated that Mendelsohn might be playing Korah, the man who led a rebellion against Moses during the 40 years of wandering in the wilderness — and whose rebellion was cut short when the ground opened up and swallowed his tents, along with those of his co-conspirators Dathan and Abiram. 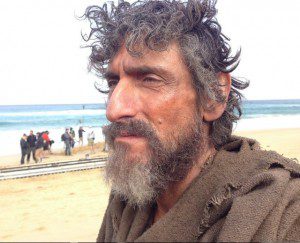 The reader pointed out that the IMDb does say an actor named Anton Alexander is playing Dathan in this film — the IMDb even has a picture of Alexander as Dathan, as you can see here! — and that Emun Elliott, who played one of the pilots in Prometheus (2012), is playing Abiram according to his résumé. That just leaves the part of Korah unaccounted for.

If Scott is including the rebellion of Korah in his film, does that mean he will go beyond the parting of the Red Sea, to show the wandering in the wilderness? Not necessarily. The Ten Commandments took elements from the Korah story — including a character named Dathan (played by Edward G. Robinson) and the ground opening up and swallowing his followers — and added them to the story about the golden calf at Mount Sinai, which happens more or less immediately after the parting of the Red Sea and well before the wandering in the wilderness. So it’s possible that Scott has rearranged some things, too.

Either way, I am intrigued to see what Scott does with this material.

And now, for those extra pictures I promised. First, Moses and Ramses riding their horses, presumably en route to the opening battle: 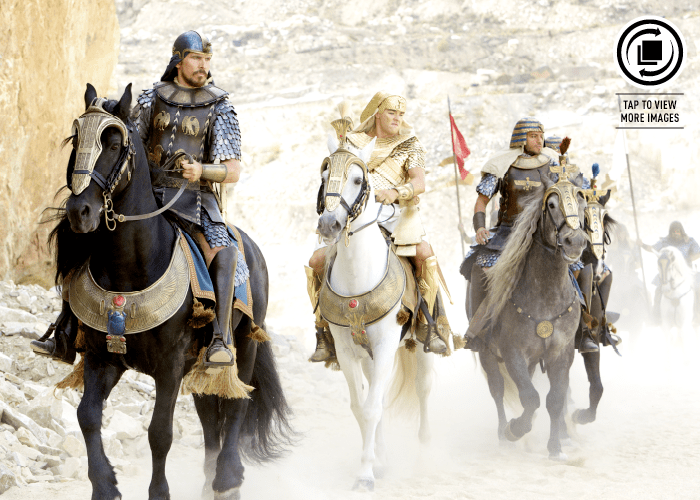 Second, Ramses on the ground, in a picture that strongly resembles a shot that was published by Entertainment Weekly last month but is actually slightly different: 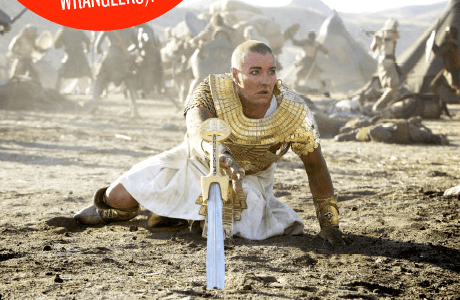 And finally, Scott directing Bale and Edgerton (with Turturro in the background): 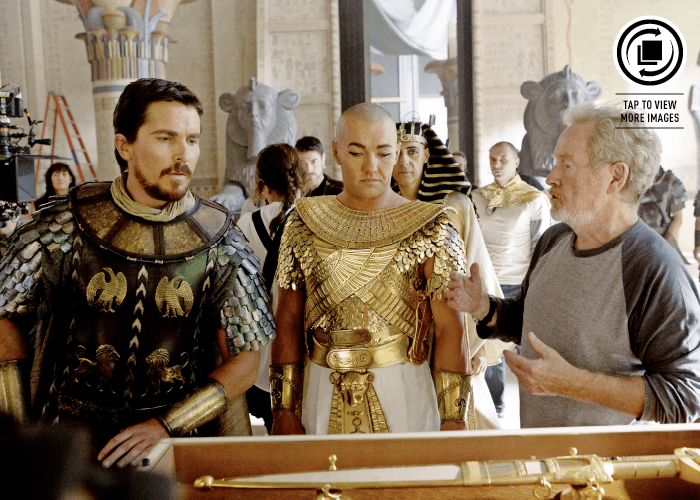 August 7, 2014 National Geographic's Killing Jesus now has a director
Recent Comments
0 | Leave a Comment
"Animation would uniquely allow the creator to show the genitalia without getting into the waters ..."
Kellen The naked Christ in film: birth, ..."
"Gentlepersons:While I am a lifelong Christ-follower and served as Chaplain to a graduate program in ..."
Darrell A. Harris Exclusive: Patrick and Paul Aiello on ..."
"I know this is from 5 years ago, but I just got around to seeing ..."
digital bookworm Exclusive: Watch the trailer for Becoming ..."
"Thanks so much for making this list. I was thinking of doing something similar, but ..."
Bill Kudrle The Chosen — season one scripture ..."
Browse Our Archives
Related posts from FilmChat