Ethnic diversity, or the lack thereof, in the new Bible movies 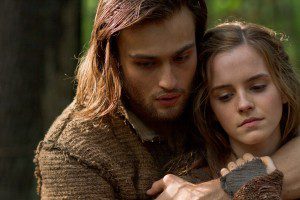 One of the issues that some people have had with Darren Aronofsky’s Noah — it was never a big-enough deal to become a full-fledged controversy, per se — concerns the ethnicity of the actors.

The film depicts the annihilation of the entire human race, except for one family that will go on to produce the entire human race as we know it today — so it seems a little odd to some people that pretty much every character we see in this film fits into a single ethnic category, i.e. Caucasian.

It seems even more odd when one considers that the human race was entirely dark-skinned at first, and that lighter skin was a later genetic mutation that emerged as certain population groups moved “into areas of low UV radiation”. The film flips this around by positing that the entire human race was light-skinned at first, or at least right after the Flood, and thus darker skin must have evolved later.

I can’t say that this particular issue bothers me too much, for two reasons:

First, the uniformity of the casting makes sense in a world that is only ten generations removed from Adam and Eve. There simply hasn’t been enough time for genetic mutations to spread throughout isolated population groups, one way or the other.

Second, the choice of ethnicity when casting this film was pretty much inevitable once the filmmakers decided to make a big-budget movie aimed at a global audience. The bigger the budget, the more conservative the filmmaking choices tend to be, and a film of this size was never going to have an all-black cast or an all-Asian cast, etc.

Ari Handel, the film’s co-writer, mentioned a third reason for this casting decision in a recent interview with Christine A. Scheller at The High Calling:

In that vein, while there’s a lot of diversity shown in the animal kingdom, there’s no racial diversity in the cast. Can you speak to that?

From the beginning, we were concerned about casting, the issue of race. What we realized is that this story is functioning at the level of myth, and as a mythical story, the race of the individuals doesn’t matter. They’re supposed to be stand-ins for all people. Either you end up with a Bennetton ad or the crew of the Starship Enterprise. You either try to put everything in there, which just calls attention to it, or you just say, “Let’s make that not a factor, because we’re trying to deal with everyman.” Looking at this story through that kind of lens is the same as saying, “Would the ark float and is it big enough to get all the species in there?” That’s irrelevant to the questions because the questions are operating on a different plane than that; they’re operating on the mythical plane.

So, in this as in other areas, the filmmakers would argue that it is a category mistake to criticize the film for failing to treat the story as “literally” as possible.

To be sure, other recent adaptations of the Noah story have allowed for some genetic diversity, by giving Noah’s daughters-in-law (and sometimes even his sons!) different racial characteristics. See, for example, Testament: The Bible in Animation (1996): 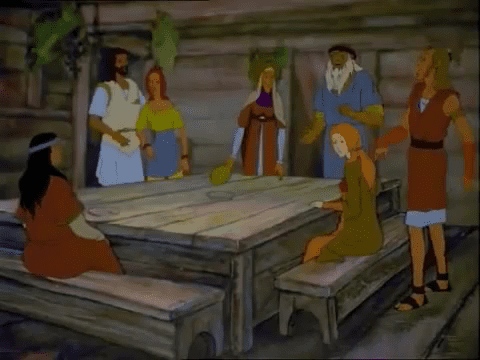 But as viewers of Aronofsky’s film will know by now, only one of Noah’s sons has a wife when the Flood begins in this film, and she gives birth to the other two wives later on. So there are only three immediate contributors to this family’s genetic profile — Noah, his wife, and Ila — rather than the five that more traditional interpretations of this story have tended to assume. And that reduces the film’s options even more.

As it happens, Noah is not the only film that has raised some eyebrows in this regard. BreatheCast asked a few weeks ago if the fact that Ridley Scott’s Exodus: Gods and Kings stars Christian Bale and Aaron Paul as Hebrews, and the likes of Joel Edgerton and Sigourney Weaver as kings and queens of Egypt, would “spark tension”.

Certainly the casting on Exodus seems to be a little… eclectic, for lack of a better word. Just within the Egyptian Pharaoh’s own family, John Turturro, an Italian-American, is playing the father of both Edgerton, a white Aussie, and Hiam Abbass, a Palestinian, while a key advisor to the Pharaohs is being played by an actor from Syria.

And one could argue that “accurate” casting matters much more in Exodus than it does in Noah because the story of Moses is much more grounded within an historical context — much less “mythical”, if you will — than the story of Noah.

So, make of that what you will.

But it does occur to me that I can’t recall ever hearing complaints like these about an earlier ancient epic directed by Ridley Scott, i.e. Gladiator (2000). That’s the one in which the Romans were played by Russell Crowe (a New Zealander of mostly northern European ancestry, though one of his great-grandmothers was Maori), Richard Harris (Irish), Joaquin Phoenix (English, German and French on his father’s side, Russian and Hungarian Jewish on his mother’s side) and Connie Nielsen (Danish).

Nor have I heard many complaints about the ethnically-inaccurate casting in the other Greco-Roman movies of the past decade or so. (I definitely heard complaints about the portrayal of the Persians in 300, but that was aimed at the storytelling and its political subtext, not at the casting.) It is only the Bible films — and, interestingly, other films set in ancient Egypt — that seem to elicit this kind of attention.

Incidentally, I have written about the issue of ethnic diversity and “accuracy” in Bible films on a few occasions before.

Eight years ago, I wrote an article looking at how then-recent films like The Passion of the Christ (2004) and The Nativity Story (2006) went out of their way to cast actors who at least looked like first-century Palestinian Jews, sometimes with the help of make-up and digital touch-ups (turning Jim Caviezel’s blue eyes brown, for example).

More recently, I wrote a post examining the curious decision to cast black actors as Samson and his mother in The Bible (2013), even though virtually every other Israelite character in that mini-series is played by someone with lighter skin.

So, as you can see, even attempts to be “diverse” or “inclusive” can invite criticism — and sometimes that criticism can be just as pointed as, if not more than, the criticism that the filmmakers would have received if they hadn’t made the effort.

April 23 update: Handel addressed the “diversity” question again during a panel discussion on faith and environmentalism that took place today:

Handel said that he and Aronofsky thought about the issue of diversity in the film before they even started writing it, and “there were times along the way when we almost abandoned the project because we weren’t sure how to solve the problem.”

“In this story, God, the highest moral authority of all, says very clearly that one family is good and deserves to be saved, and everybody else on the planet is wicked and deserves to die,” Handel said. “So those are really high moral stakes. And what was clear to us and essential was that we could not, no matter what, show racial differences between who lived and who died, or we’d be making a terrible, terrible statement.” Handel said that because of this, “we looked to make a cast, both on the boat and off the boat, who had as little difference as possible. And I want to be clear that there’s no reason that that cast had to be Caucasian. We could have cast any Noah and built the world around him.” After Russell Crowe was chosen for the role of Noah, he said, “the rest of the casting followed from there.”

“I think Ari said it perfectly,” added Aronofsky, who similarly said that “we nearly abandoned the project several times because we knew it would be an issue.”

This point — that it would have been very dangerous for the film to present members of one race as heroes and members of other races as wicked — occurred to me as I was writing this post, but I neglected to mention it, except in the comments below.