Ridley Scott discusses the “international cast” of Exodus: Gods and Kings in a new interview (plus: new photos!) 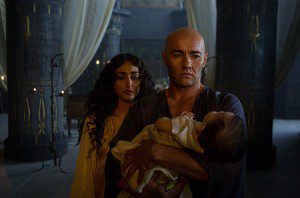 Three months and a few days before it opens in New Zealand, the publicity campaign for Ridley Scott’s Exodus: Gods and Kings continues to step up. The latest example: an interview with Ridley Scott on Yahoo! Australia, accompanied by some brand-new pictures.

In the interview, Scott repeats a few things that he has said before, and it’s kind of hard to resist nitpicking some of his claims. For example, he once again says he wasn’t paying attention in his “religious instruction” classes when he was a boy, and that he had “no idea” how close Moses and Ramses were when they grew up together — but the Bible never says who the Pharaoh of the Exodus was, much less that he was ever close to Moses. Scott also says the story takes place “5000 years ago”, when in actual fact the historical Ramses II reigned just over 3200 years ago.

He also alludes once again to the doubts that Moses has in his film:

Q: How was the experience of making Exodus?

A: I’m telling you, it went way beyond my expectations. I think the fundamental structure of the story is so rich with emotional context, the challenges and the doubt that Moses faces, it’s incredible. And Moses continues to have doubts about himself and what he senses, and what he doesn’t sense, what to believe or not believe. It’s a real emotional ride. I’d never worked with Christian [Bale] before, and he delivered way beyond my expectations. He was fantastic.

The interview never refers directly to the controversy over the ethnicity of the actors in his film, but Scott does comment on how he assembled his “international cast”:

Q: What was in your mind when you set about creating this international cast?

Egypt was – as it is now – a confluence of cultures, as a result of being a crossroads geographically between Africa, the Middle East and Europe. We cast major actors from different ethnicities to reflect this diversity of culture, from Iranians to Spaniards to Arabs. There are many different theories about the ethnicity of the Egyptian people, and we had a lot of discussions about how to best represent the culture.

Scott also sort of deflects a question about how religious audiences might receive the film:

Q: Are you concerned about how religious communities will receive the film?

A: I try to be as respectful and honest as possible, because my job is to put myself in the position of that man, as near as I can do it, and tell his story. I do that in partnership with an actor – in this case a wonderful actor, Christian Bale – and we want to honour the story and the man. I spent a lot of time casting this film and we cast it very carefully. And as I said, I think our actors have done a wonderful job.

You can read the rest of the interview at Yahoo! Australia.

The interview is accompanied by seven new photos, a few of which seem almost designed to highlight the presence of Middle or Near Eastern actors in key supporting roles. For example, there is this picture of Ramses (Joel Edgerton) and his wife Nefertari, who is played by the Iranian actress Goldshifteh Farahani: 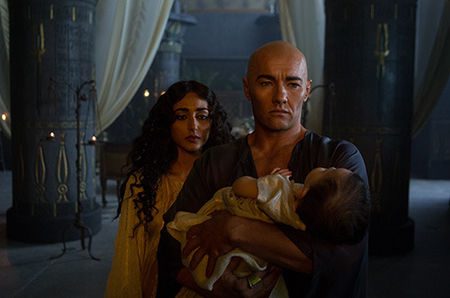 Then there is this picture of Ramses and his military officer Commander Khyan, who is played by Dar Salim, a Danish actor who was born in Iraq: 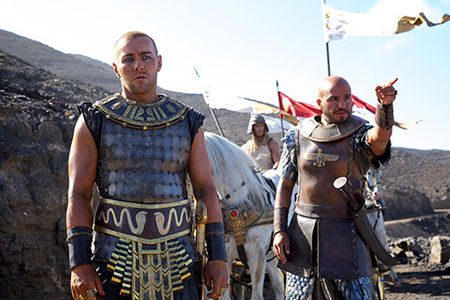 And then there is this picture of the wedding of Moses and Zipporah officiated by her father Jethro, who is played by Kevork Mailkyan, a Turkish-born Armenian: 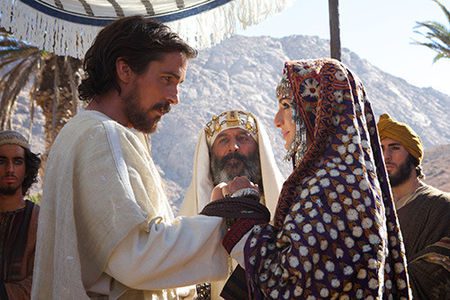 The gallery also includes this close-up of Zipporah, who is played by Spanish actress María Valverde: 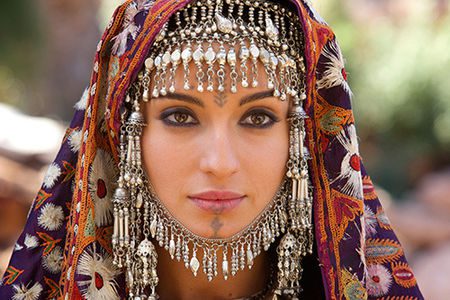 On a more familiar note, there is this picture of Moses meeting with Joshua’s father Nun, who is played by Ben Kingsley (see a similar picture here): 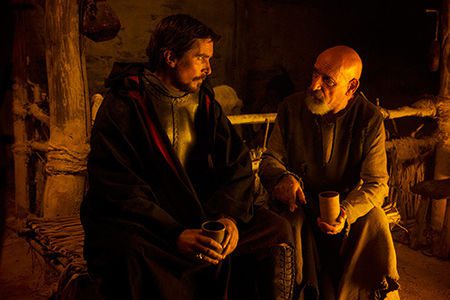 And then there are these two pictures of Moses before and during the film’s opening battle scene, which seem almost identical to similar images in the trailer: 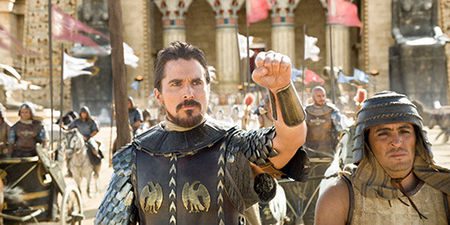 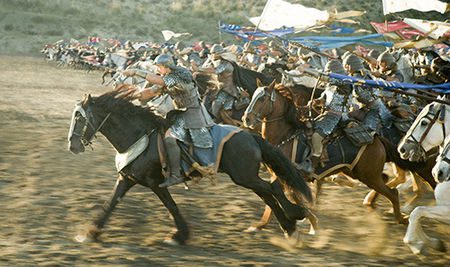 September 4 update: 20th Century Fox has now released high-res versions of the above photos, along with captions and a photographer’s credit: 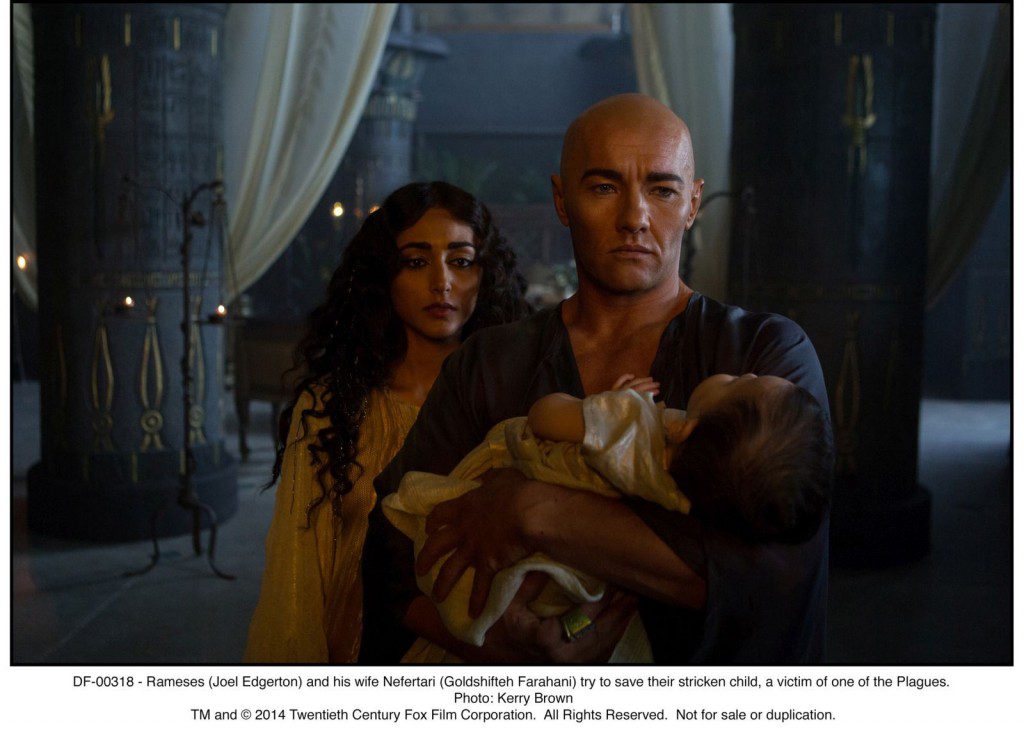 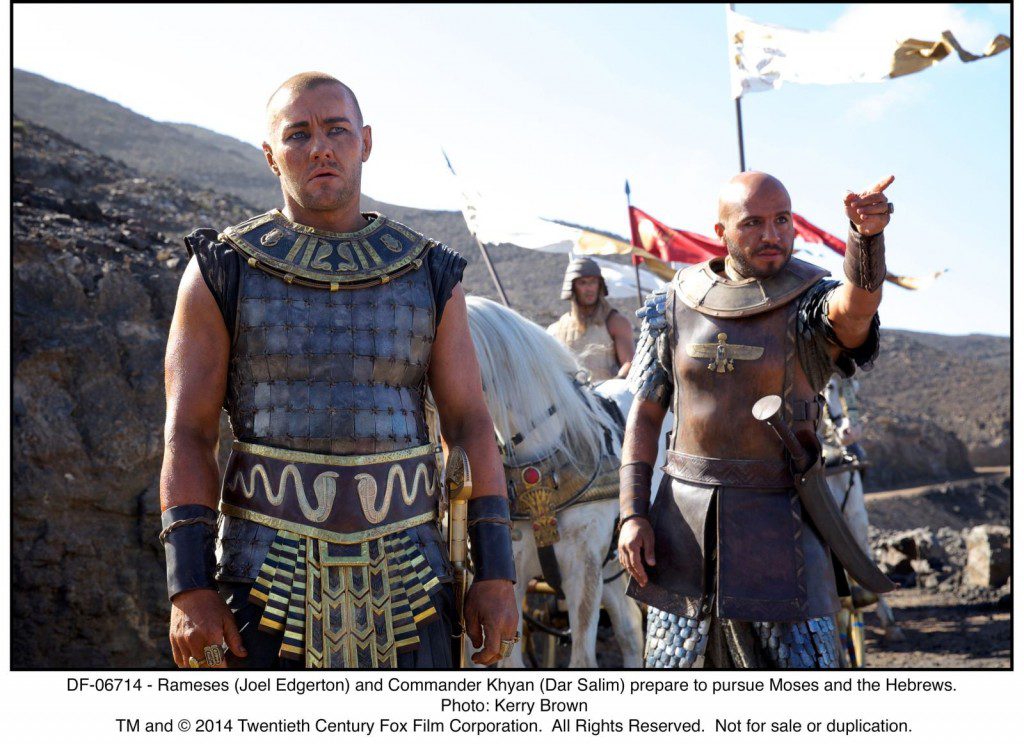 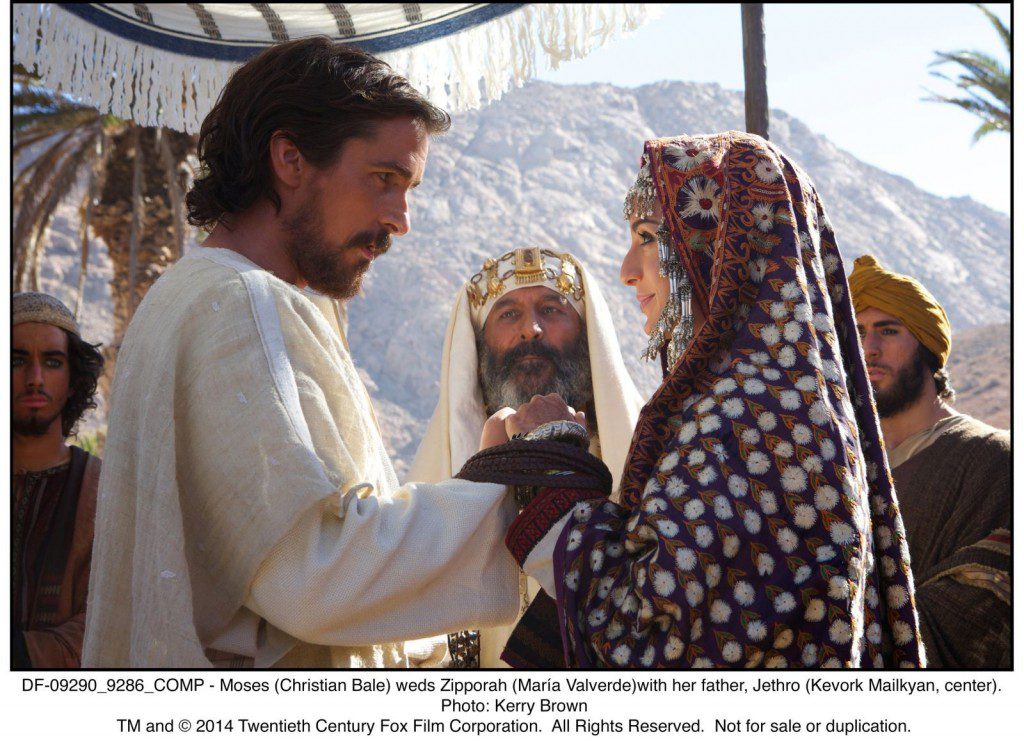 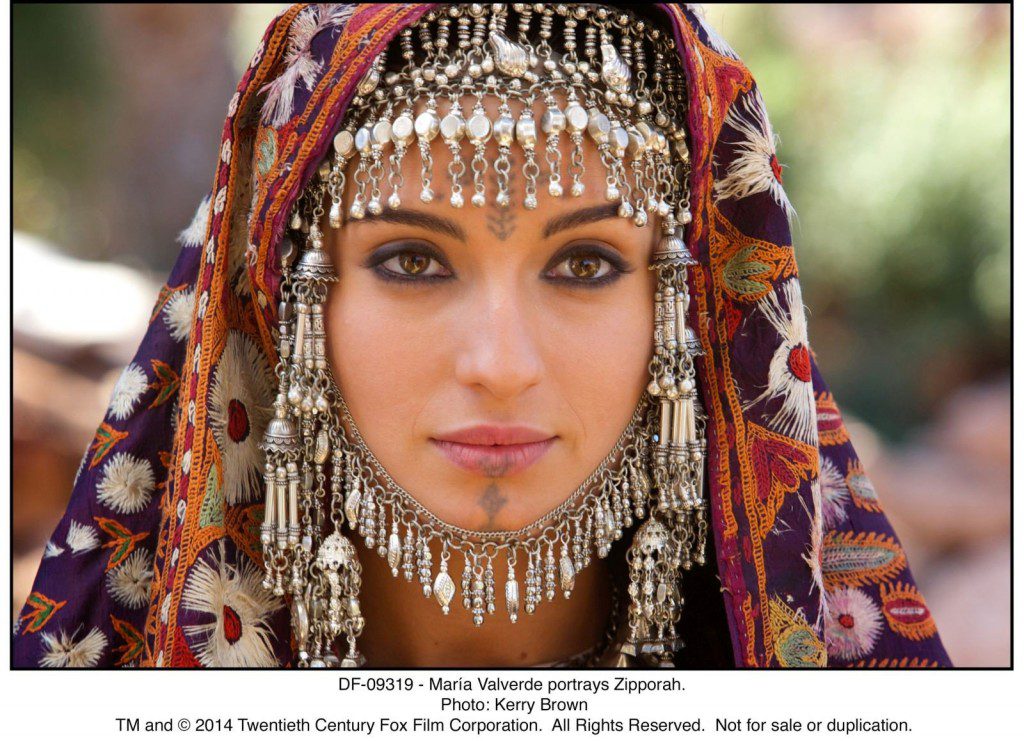 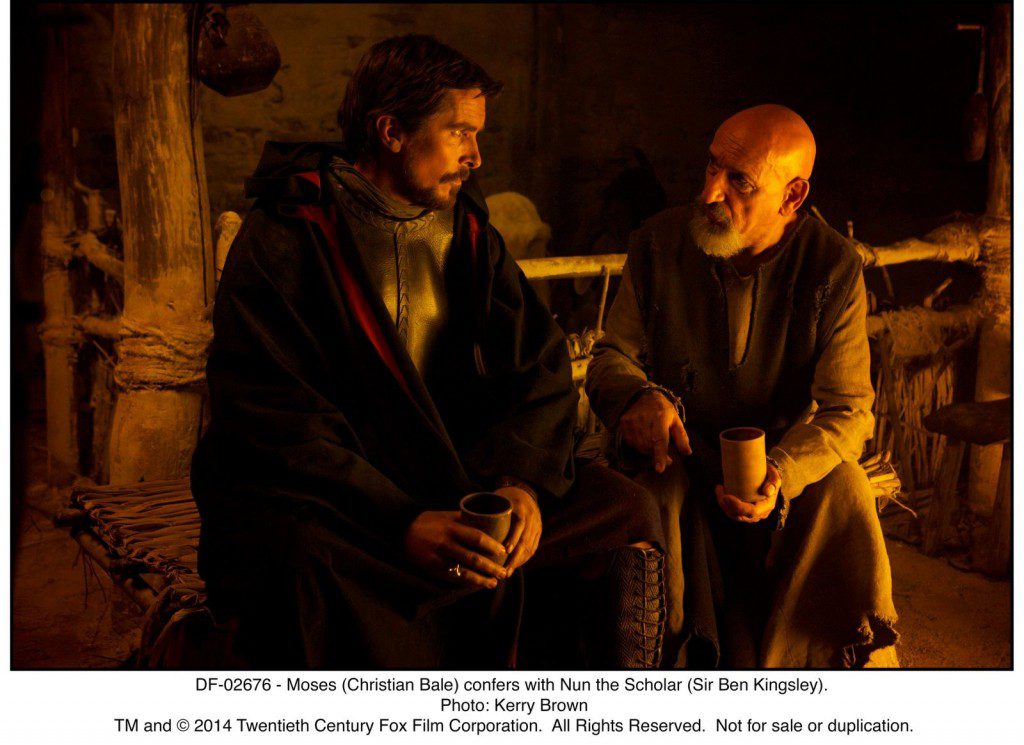 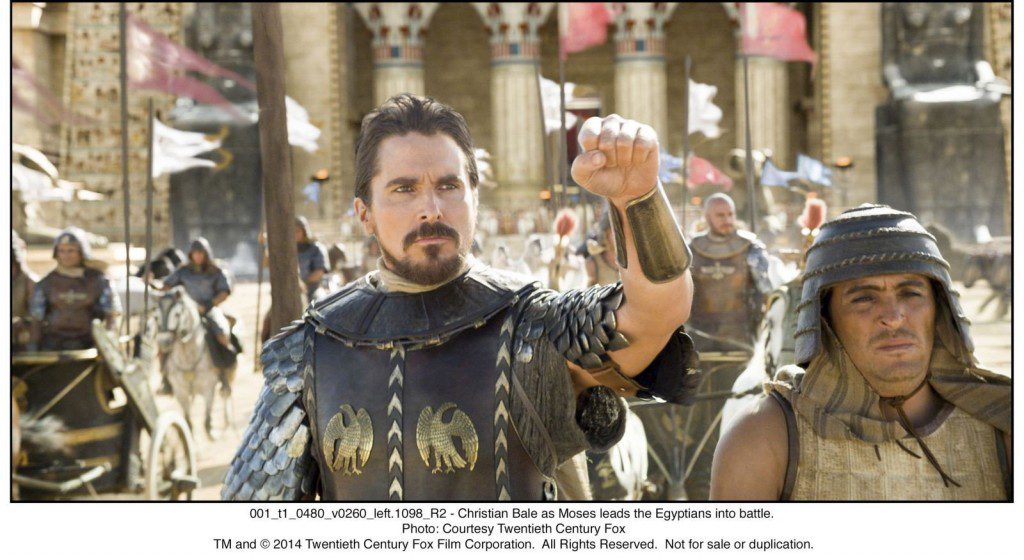 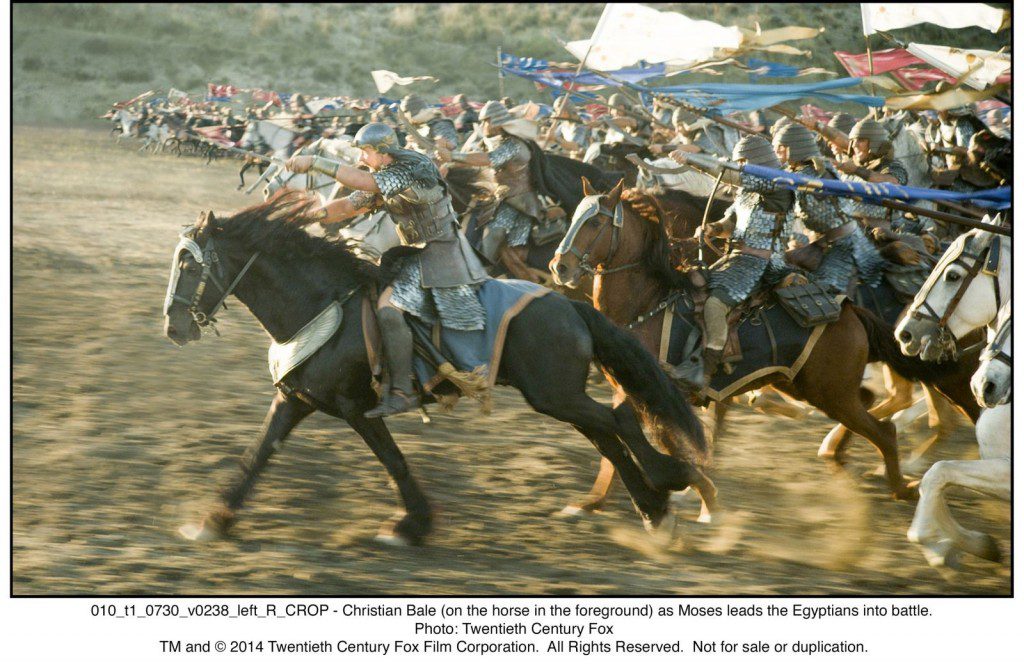 August 25, 2014
The Exodus: Gods and Kings - Lawrence of Arabia overlap
Next Post