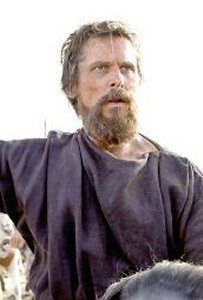 The October issue of Empire magazine is out, and with it, a new article looking at Ridley Scott’s Exodus: Gods and Kings. This time the primary interviewees are Aaron Paul and Ben Kingsley, who play the Hebrew slaves Joshua and his father Nun — and they reveal a bit more about the role that their characters play in the story, and in shaping the destiny of Moses.

The article also comes with new pictures, including the one to the right, which gives us our first good sense of what the Moses of the Exodus — as opposed to the Moses who is a prince of Egypt — will look like.

The key thing we learn from the article is how the characters Joshua and Nun become a part of Moses’ life in the first place.

We already knew, thanks to an article that appeared in Première five months ago, that Moses will be inspecting the construction of a statue of the Pharaoh Ramses, his adoptive half-brother, when he sees a taskmaster beat the slave Joshua. Now, Aaron Paul describes how that chance encounter leads to something else:

“Moses is an Egyptian general. And Joshua tends to stay away from those types of people. It’s not appropriate to approach them, or talk to them, or even make eye contact with them,” Paul explains. “But then Nun persuades Joshua to give Moses a note saying Nun would like to speak to him, he has something important to say. Later we find out that Moses is a very special human being. Moses is the one who can bring us to salvation. So cut to Moses realising, ‘Well, maybe that is my calling.’ And so that’s what he’s doing now. It’s a wild, messy ride.”

The role of Nun is a minor but pivotal one, helping bring Moses to the realisation that, as an outsider himself, he must fight to free the enslaved Hebrews. “Nun becomes one of the leaders of the Exodus,” Kingsley reveals. “He is the leader of his own community, he’s the father of Joshua. Basically, he takes the mantle from Moses. I was delighted to fill in that silhouette.”

“The central issue is slavery and the bringing of a very disparate group of people together to break out of that bondage. Moses is a man who is, in a sense, exiled from his own heritage, and therefore he feels his Jewishness very keenly once it is introduced to him. And then he is driven to do something for his newfound people. I’m sorry to say, it is still a very modern story. There are millions of people all over the world who need to be enfranchised.”

First, I think it’s kind of cool that they’ve taken Nun — a man about whom the Bible says nothing except that he was Joshua’s father — and made him a full-blown character. I like it when Bible movies pick up on obscure or little-known details like that. (I’ll be even more impressed if the film acknowledges that Joshua’s birth name was Hoshea, and that Moses gave him the name Joshua. But never mind.)

Second, in the Bible, the story goes that Moses saw an Egyptian beating a Hebrew slave, so he killed the Egyptian and tried to cover up what he did — but then, when he found out that the other slaves knew what he had done, he fled the country. It is not clear yet whether the Moses of this movie will actually kill anyone in defense of Joshua, but it’s possible that that might be what catches Nun’s eye.

Incidentally, the Bible doesn’t say who the slave that Moses defended was, and different films have handled this scene differently. The makers of The Prince of Egypt, for example, wanted Moses to come to the defense of his sister Miriam — but the rabbis who advised them said Moses needed to defend a random anonymous slave in order to underscore his identification with the Hebrew people as a whole. Cecil B. DeMille’s The Ten Commandments, on the other hand, had Moses come to the defense of Joshua, a slave that he had already met — and then, instead of fleeing into the desert, Moses was arrested and sent into exile by Ramses himself.

From the sound of it, Exodus may combine the two approaches, making the slave that Moses defends a character that we in the audience know — namely Joshua — but setting the story up so that Moses himself has never met Joshua before.

And now, the new pictures. Here’s Moses wearing a hooded cloak, possibly from the scene where he goes to meet with Nun: 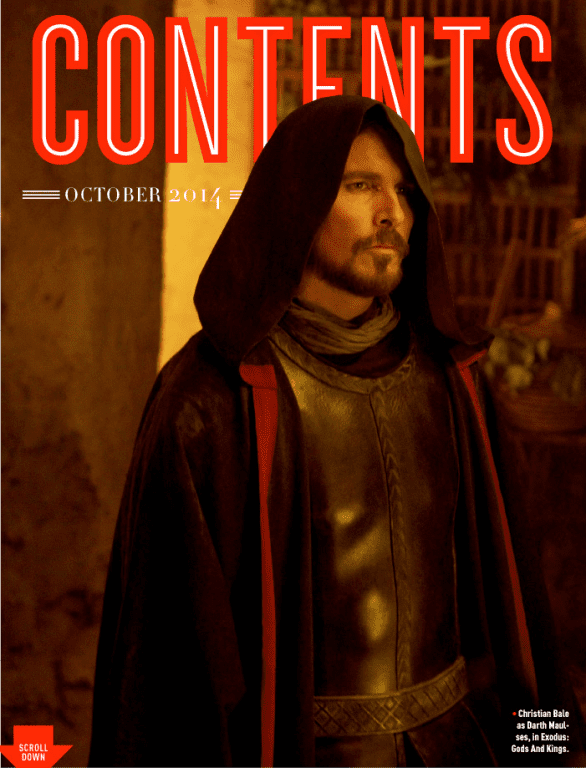 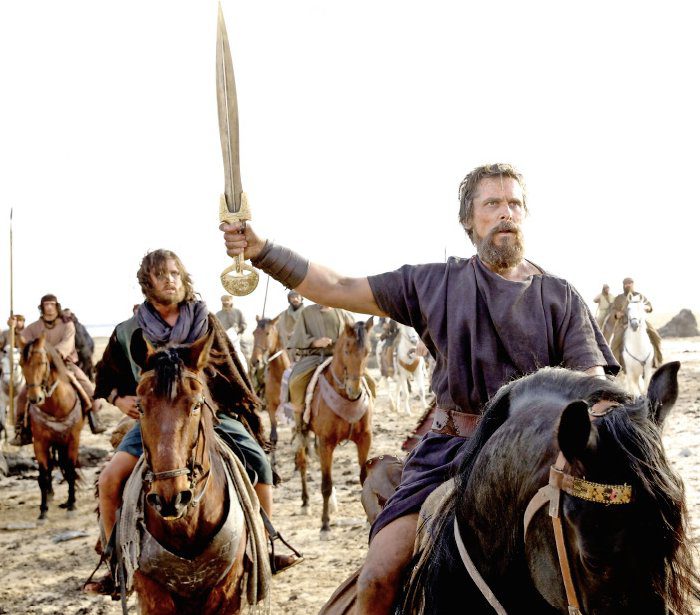 And here’s Ramses in his chariot: 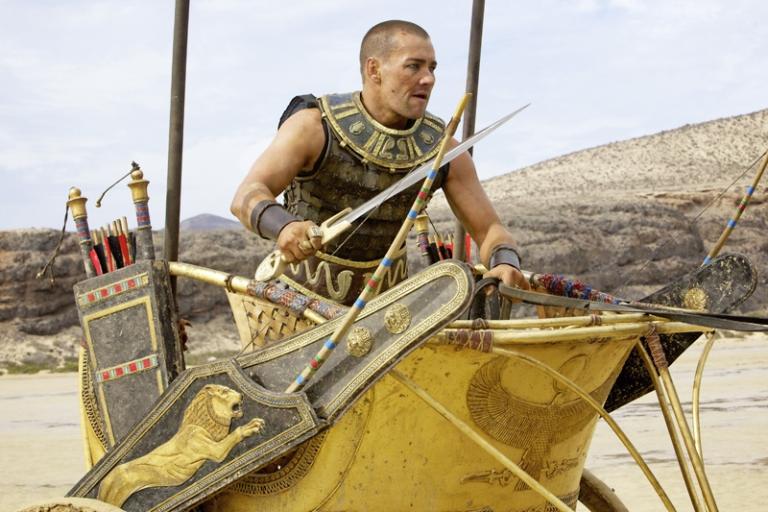 Empire also has the following two pictures, which seem to me to be little more than screencaps from the trailer: 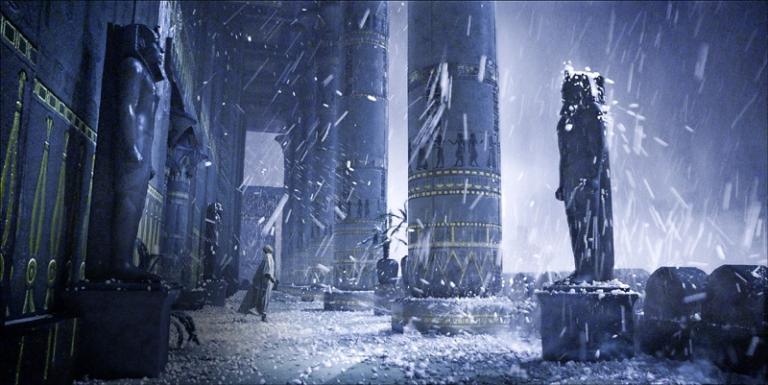 Regarding that last picture, Empire notes that “tornadoes” were not part of the ten biblical plagues — but I’ve been assuming that these whirlwinds are related somehow to the “pillar of fire and cloud” that guided and protected the Hebrews.

Incidentally, those last two pictures remind me that the Exodus Facebook page has posted a few GIFs based on those and other scenes from the trailer:

August 29 update: Kingsley also discusses his pivotal scene with Christian Bale in this interview, starting at the 24:29 mark:

When I was on the set with Christian Bale, for whom I have an enormous respect and affection, and most of my scenes are with him . . . There’s a wonderful scene where I– it is in my character’s brief that I tell Christian that he’s Jewish, that I tell him that he’s not Egyptian, that I tell him where he was born, I even say, “Your mum’s actually sitting behind me.” It’s an extraordinary scene, where for the first time, that guy who thinks he’s an Egyptian prince is told, “Uh-uh-uh, you’re a Holocaust survivor, basically.” It’s a beautiful scene, and Ridley brought that ingredient into the film, he brought the 20th century right into the room of the set, without trivializing, vulgarizing, with enormous love and respect, said, “This is tough, this scene. Let me put in context.” You know? And then he put six cameras on the scene, and we play it like a David Mamet play. It’s a long, long, long take, and at the end, he says, “Great, do it again.” We do it again, and he says, “Great, we’re moving on.” Two takes. Two takes. Because he’s prepared the ground beautifully.

August 26, 2014
Ridley Scott discusses the "international cast" of Exodus: Gods and Kings in a new interview (plus: new photos!)
Next Post

August 29, 2014 Darren Aronofsky on how the Alberta tar sands influenced the visual look of Noah
Recent Comments
0 | Leave a Comment
"Earth actually does exist in the Dark City universe. Early in the film when John ..."
Edward Clint Dark City and the ambiguous ending.
"I don't always agree with your opinions, but your reviews are never less than interesting ..."
Laura-Lee Rahn The top-grossing Italian movie of 2019: ..."
"Whoever wrote this article called Mary a virgin. She was only a virgin till after ..."
Ronnette Harvey The latest attempt to film all ..."
"In addition to this explanation of why "Paul says he can’t tell the Roman Christians ..."
PaulDT Paul, Apostle of Christ: a scene ..."
Browse Our Archives
Follow Us!