Exodus: Gods and Kings: new photos, some hints about Ramses’ mother, and the international release dates 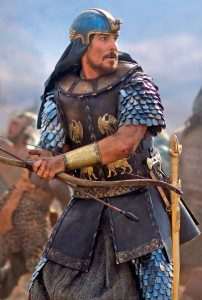 Many of the images released so far for Exodus: Gods and Kings — see here, here, here and here — have revolved around an opening sequence in which Moses and Ramses are sent by the Pharaoh Seti to lead the Egyptian army into battle against the Hittites. That trend continues with a new photo that appears in Entertainment Weekly’s fall movie preview: once again — but from a new angle! — we see Moses wielding his bow and arrow as the battle rages around him.

The preview also gives us a new look at Sigourney Weaver’s Queen Tuya — and the accompanying write-up seems to drop a hint or two about the role that she will play within the film. Check ’em out below the jump. 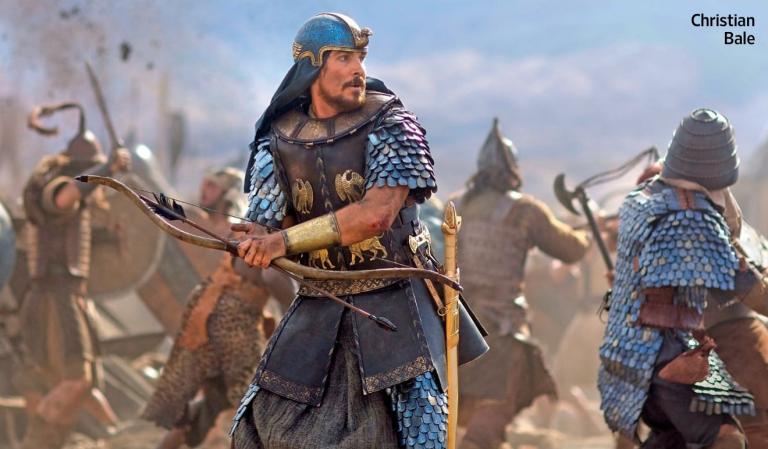 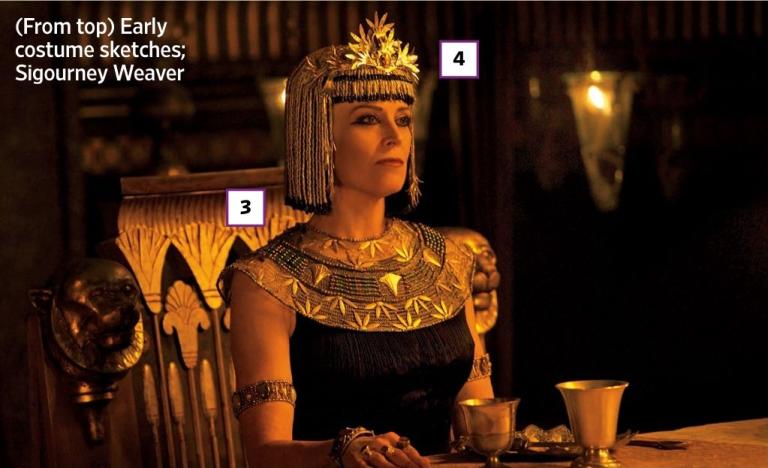 The second picture shows Tuya in the same basic costume and setting as a photo we saw last month. But note the numbers that tag this picture of Tuya. If you tap #3 on your iPad, a caption comes up that quotes costume designer Janty Yates:

Egyptian Cougar
Sigourney Weaver’s Tuya is the mother of Ramses (Joel Edgerton), but that doesn’t mean her costumes are matronly. “Ridley [Scott] wanted her to be totally va-va-voom,” says Yates. “She’s still on the prowl. We went more Jessica Rabbit.”

Dress to Opress
Weaver’s red-carpet-ready costumes underscore Tuya’s bold ambitions for her son — even after he becomes Egypt’s king. “We reflected that in her headdresses and her over-the-top jewelry,” says Yates.

Bold ambitions for her son even after he becomes king, eh? This would seem to suggest that Tuya will be something of a manipulator — not unlike Nefretiri, who was the wife of Ramses rather than his mother, in The Ten Commandments. Perhaps Tuya will even “harden Pharaoh’s heart” the way Nefretiri did in that film.

In any case, it looks like this film’s characterization of Ramses and his parents will be quite different from that of The Ten Commandments and The Prince of Egypt. In those two films, the mother was either nonexistent or barely interacted with Ramses, whose relationship with his father was much more clearly defined: in The Ten Commandments, Ramses was a strong, arrogant alpha male who honoured both his father and the throne his father sat on, while in The Prince of Egypt, Ramses was chastened like an adolescent and burdened by his father’s insistence that he not be the “weak link” of the dynasty. It looks like the Ramses of Exodus may be similarly burdened, but by the expectations of his mother rather than his father.

(Slight tangent: Given all the hints to the effect that Ramses’ father Seti will die much earlier in this film than he does in the other films, I have wondered for some time — though not very seriously — if this film will show Ramses killing his father, similar to how Commodus killed Marcus Aurelius in Ridley Scott’s Gladiator. Now I almost wonder if Ramses’ mother will kill his father, similar perhaps to how Agrippina is said to have killed Claudius so that her son Nero could become emperor of Rome.)

The Entertainment Weekly article also includes some quotes from Scott and Christian Bale, neither of whom say anything particularly new. For example, Bale, echoing last year’s comment that the biblical story of Moses is “shocking”, now says: “Can you imagine if he was alive today? He’d probably be on trial in the Hague.”

Costume designer Yates also notes that the breastplate (or cuirass) worn by Moses in the early battle sequence was originally decorated with gold images of griffins and lions, “but then we decided Moses’ emblem was the eagle. It’s more noble.”

Because Exodus is coming out in December, right in the thick of awards season — and because Scott’s last foray into the ancient-history genre, i.e. Gladiator, actually won five Oscars including Best Picture — Exodus is also mentioned in a separate EW article on the year’s “best picture contenders”. (Click here for a post I wrote several months ago on the track record of biblical and ancient movies at the Oscars.)

Incidentally, speaking of the film’s release in December, a list of foreign release dates is now up on the film’s Facebook page. The first countries to get the film will be New Zealand and Ukraine, on December 1, and the last will be Japan, on January 30. The film is set to open in the United States and Canada on December 12.

You can check out the full Entertainment Weekly article below: 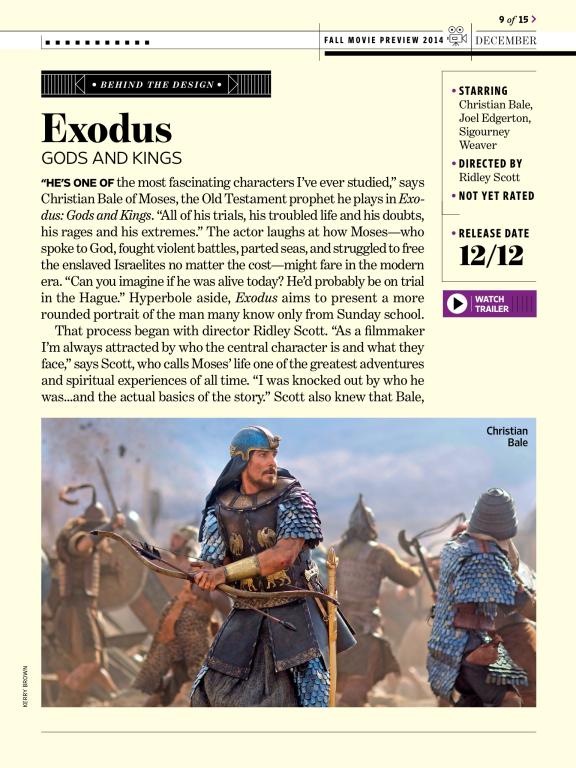 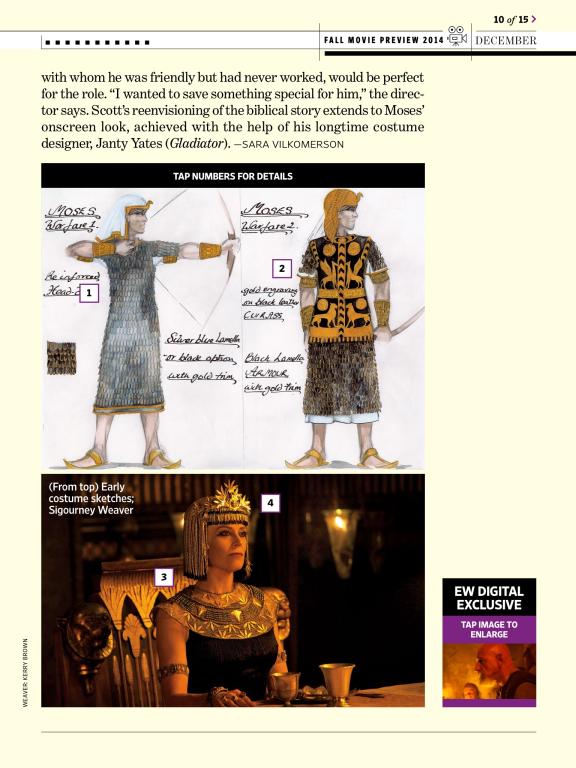 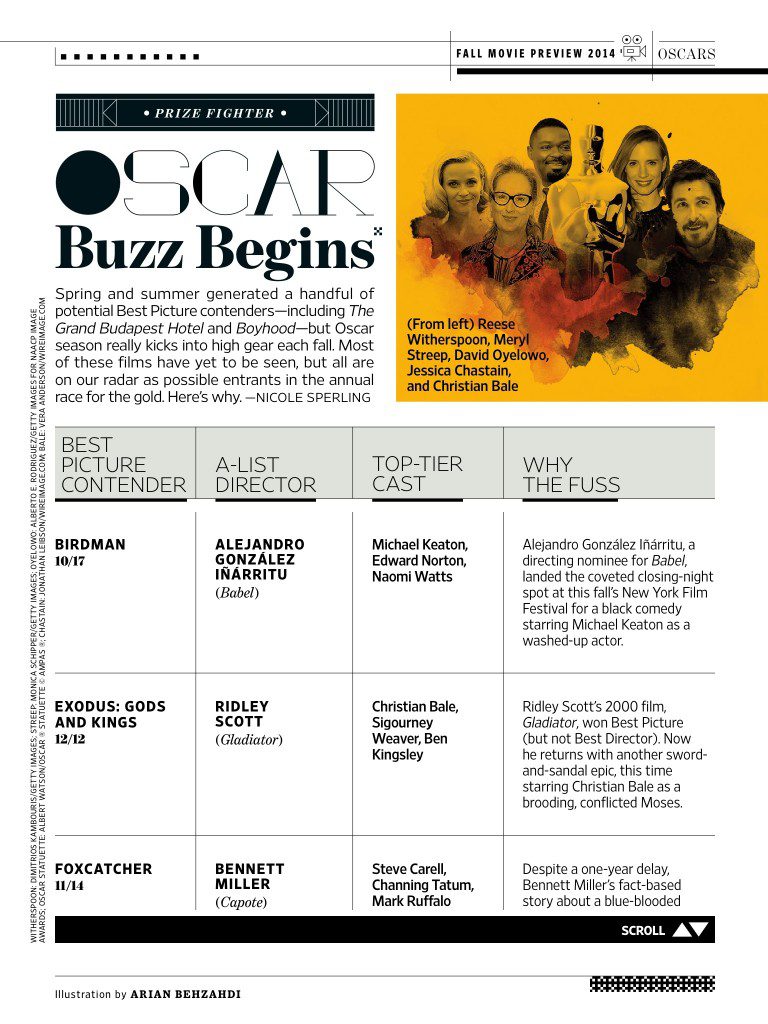 And here is the film’s current international release schedule, as per its Facebook page: 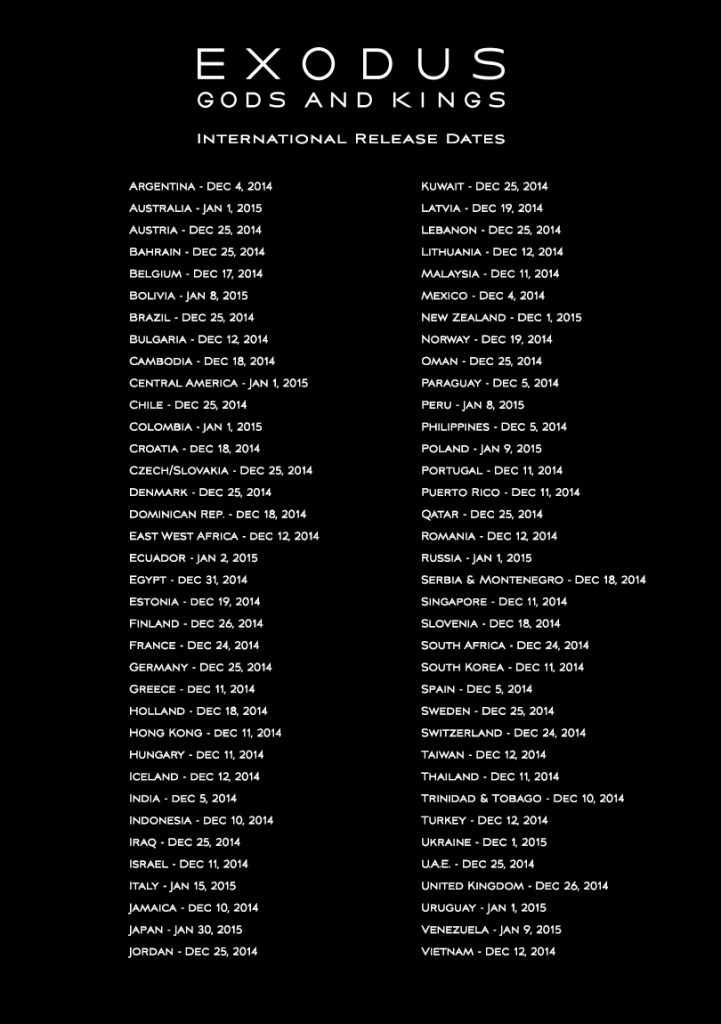 August 19 update: The Entertainment Weekly article is now online. Here is how the above pictures look on the magazine’s website (in general, the website versions of these photos are less tightly cropped, but lower in resolution, than the iPad versions): 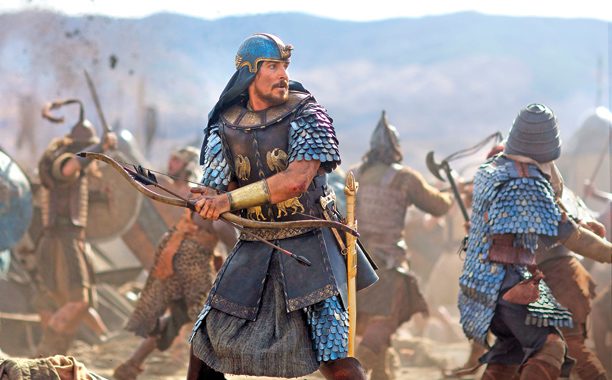 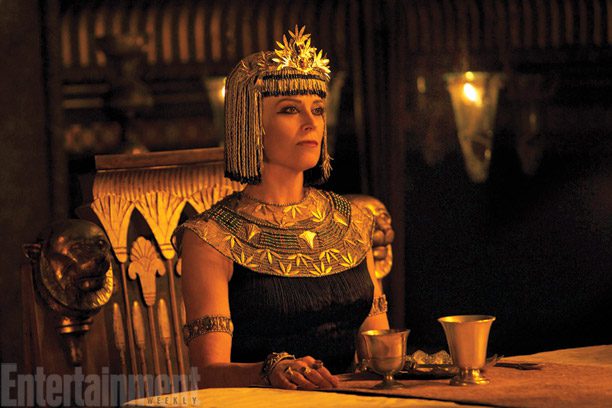 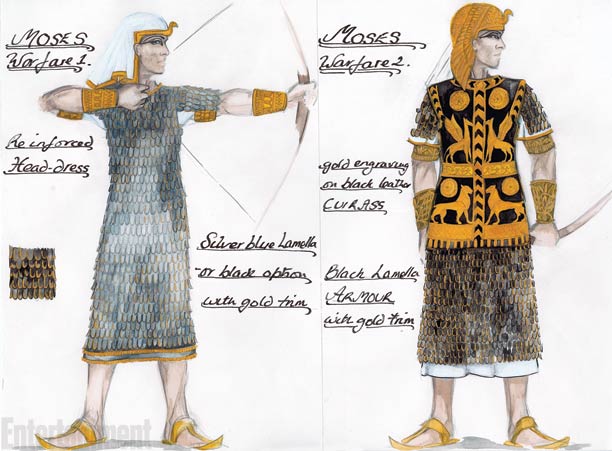 August 20 update: The movie’s Facebook page posted a third version of the Bale-with-bow-and-arrow photo today, and this one has even more “information” at the top and bottom, though it has less on the sides (especially on the right): 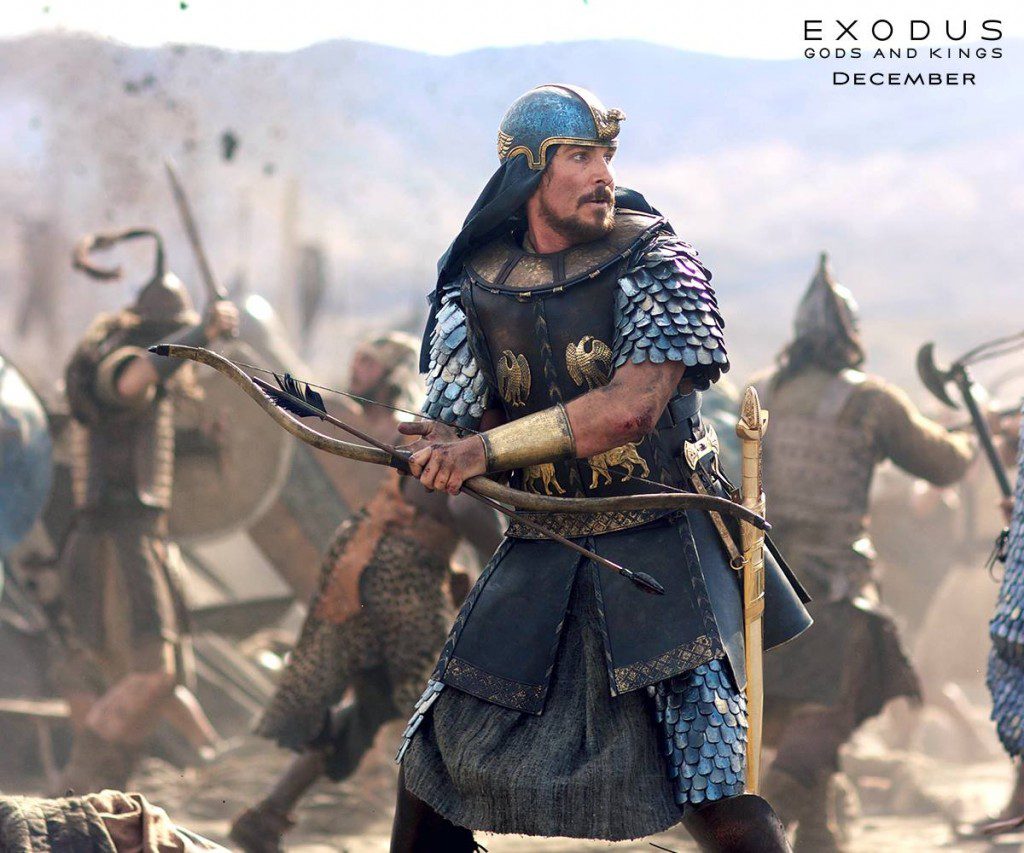 September 4 update: 20th Century Fox has now released another version of the Bale-with-bow-and-arrow photo, and it has the most “information” yet: 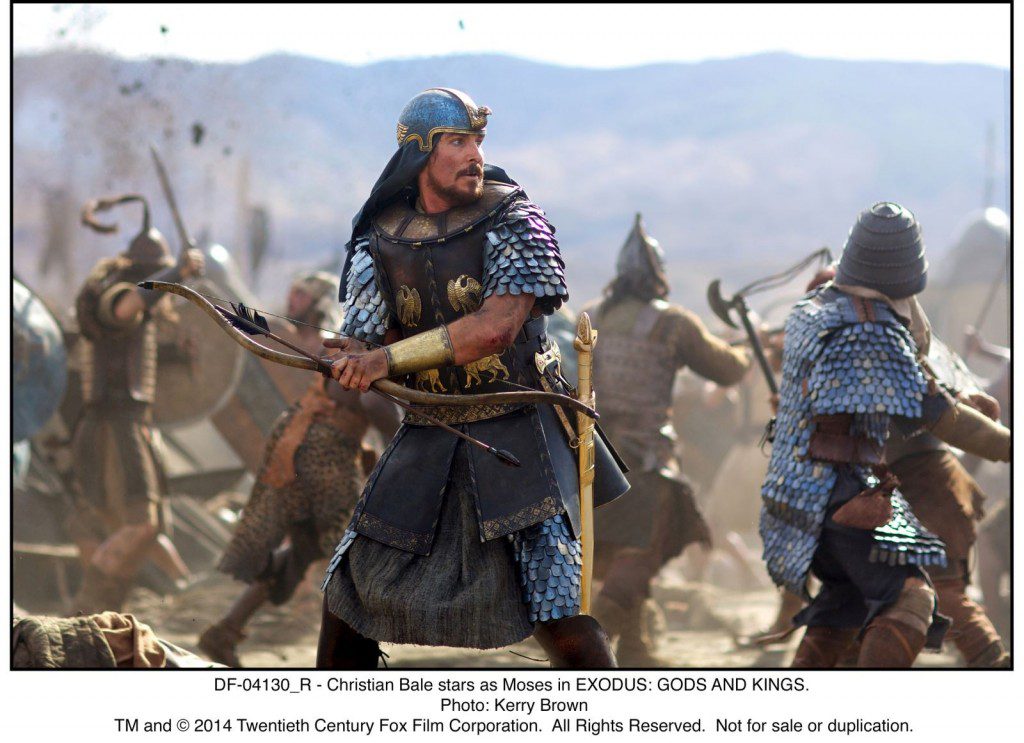 August 12, 2014
Tom Hiddleston to star in the upcoming remake of Ben-Hur?
Next Post

August 16, 2014 Casting news for The Dovekeepers, but what about A.D.?
Recent Comments
0 | Leave a Comment
"Animation would uniquely allow the creator to show the genitalia without getting into the waters ..."
Kellen The naked Christ in film: birth, ..."
"Gentlepersons:While I am a lifelong Christ-follower and served as Chaplain to a graduate program in ..."
Darrell A. Harris Exclusive: Patrick and Paul Aiello on ..."
"I know this is from 5 years ago, but I just got around to seeing ..."
digital bookworm Exclusive: Watch the trailer for Becoming ..."
"Thanks so much for making this list. I was thinking of doing something similar, but ..."
Bill Kudrle The Chosen — season one scripture ..."
Browse Our Archives
Related posts from FilmChat