Will there be “naturalistic interpretations” of the Red Sea parting and other miracles in Exodus: Gods and Kings?

Will there be “naturalistic interpretations” of the Red Sea parting and other miracles in Exodus: Gods and Kings? September 16, 2014 Peter T. Chattaway 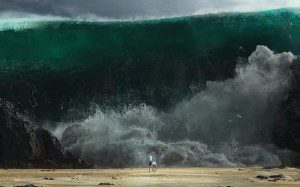 The Exodus: Gods and Kings set-visit reports keep on coming!

Earlier today, I linked to reports that were posted today by the European websites Bad Taste, Total Film and MTV UK. Now there’s one at Yahoo! Movies UK, and unlike the others, it actually says a few new things about the film itself.

Among other things, it tells us that the battle in the film’s first act will be not just any skirmish between the Egyptians and the Hittites; it will be the Battle of Kadesh, the largest chariot battle ever fought. This, it seems, will be another of the movie’s anachronisms, since the historical battle was fought in 1274 BC, five years after the death of the Pharaoh Seti, but in the film it is Seti (played by John Turturro) who sends the Egyptians into battle under the leadership of Ramses and Moses.

The filmmakers also speak very frankly about how they are “exaggerating” some of the historical details for “romantic” or cinematic effect:

“Everyone hears about the pyramids, how amazing they are, but the great pyramid in Giza is only 440 foot high, a 40-story building. Then, it was fantastic, but now we need to pump up the scale a little bit.

“Ridley is trying to romanticise the story he’s telling, rather than a ‘scholastic British museum goes to the Cairo museum’ type of storytelling.”

This exaggeration extends to the clothing, with Oscar-winning costume designer Janty Yates telling us that they added kilts to the outfits of Moses and Ramses because they looked good on Russell Crowe in ‘Gladiator’. “We have researched the heck out of this period” she said, “but then we twisted it”.

Most intriguingly, however, the filmmakers hint that the film, while exaggerated on some levels, might present a “naturalistic interpretation” of the miracles:

It’s even been suggested that the film will offer natural and rational explanation for both the plagues that afflict Egypt and the film’s big set piece – the parting of the Red Sea.

“How could that have happened?” asks Scott. “Even if it was a hand of God…I’d read – and I don’t know how they know this – but in approximately 3000BC there was a massive undersea volcano and earthquake, which created a tsunami wave that had to have been a couple of hundred feet high. Just off the heel of Italy. Diagonally across you’re staring right up the mouth of the Nile, so I’m wondering if that had anything to do with that.”

We don’t know if Scott will reference this theory in the film, but Max said we should expect a “naturalistic interpretation” of these events, without “the booming voice of God coming through the clouds”.

That’s rather interesting, as the one glimpse we’ve had of the Red Sea so far — in the shot from the trailer at the top of this post — is pretty one-sided. It doesn’t really suggest the parting of the Red Sea, with two walls of water on either side of the dry land. So maybe the movie will explore the it-was-a-tsunami idea?

The idea that Exodus will allow for a “naturalistic interpretation” of the miracles is also interesting because the most famous Moses movie of them all, The Ten Commandments (1956), actually alluded to modern “rational” explanations for the miracles only to dismiss them (at least within the film), in a scene where Moses meets Ramesses and his chief priest Jannes mid-way through the ten plagues: 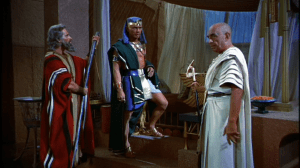 Jannes: The people desert the temples. They turn from the gods.
Ramesses: What gods? You prophets and priests made the gods that you may prey upon the fears of men. When the Nile ran red, I, too, was afraid, until word came of a mountain beyond the cataracts which spewed red mud and poisoned the water. (to Moses) Was it the staff I gave you that caused all this? Was it the wonder of your god that fish should die and frogs should leave the waters? Was it a miracle that flies and lice should bloat upon their carrion and spread disease in both man and beast? These things were ordered by themselves, and not by any god. Now go.
Moses: That you may know these things are done of God, you shall see hail fall from a clear sky and burn as fire upon the ground, you shall see darkness cover Egypt when the sun climbs high to noon, and you shall know that God is God, and bow down to his will.
Ramesses: Nothing of this earth can make me bow to you, Moses.
Moses: Behold, the hail comes. When darkness has covered Egypt for three days, your ministers will send for me.

So, will Sir Ridley take Ramesses’ side here? Hard to say at this point.

We do know that various miracles will be in the film. The trailer has already shown us hints of various plagues, as well as that wall of water by the Red Sea. In addition, visual-effects supervisor Neil Corbould — who won Oscars for his work on Gladiator and Gravity — has discussed how he made the burning bush.

But keep in mind what Joel Edgerton told Total Film back in February, too:

As ever, we’ll know exactly what the filmmakers are up to when Exodus: Gods and Kings comes to theatres worldwide in the first two weeks of December.

September 17, 2014 Watch: Featurette on Exodus: Gods and Kings costumes
Recent Comments
0 | Leave a Comment
""AD" stands for "Anno Domini", a Latin expression meaning "In the Year of Our Lord".So ..."
Peter T Chattaway The Chosen — season one, episode ..."
"Why does it say at the start of episode 3 that it takes place 26 ..."
Desiree Chamberlain The Chosen — season one, episode ..."
"What about Hellboy, The Grudge, Ghoulies, and Anaconda?"
45th Spiderbob Group VGCP When R-rated franchises go PG-13 …
"Not yet, but I might do something like that once Season 2 is complete."
Peter T Chattaway The Chosen — season one scripture ..."
Browse Our Archives
get the latest from
FilmChat
Sign up for our newsletter
POPULAR AT PATHEOS Entertainment
1