Moses joins the Bar Kokhba revolt, and other anachronisms in Ridley Scott’s Exodus: Gods and Kings 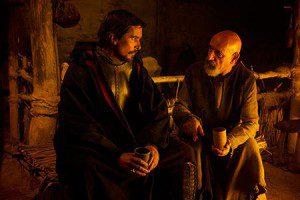 Yesterday, 20th Century Fox released a new featurette on the locations for Exodus: Gods and Kings. Among other things, it contained one never-before-seen shot from the film, of Moses secretly visiting with Joshua’s father Nun and some other “Hebrew scholars”.

Today, a sharp-eyed reader pointed out to me that there is an engraving behind Nun in this newly-revealed shot, and that it seems to be based on a coin that was minted by Jewish rebels during the Bar Kokhba revolt — a war against the Romans that took place about 1,400 years after the events of this film. The engraving behind Nun even seems to include the letters that spell Bar Kokhba’s first name, Shim’on: 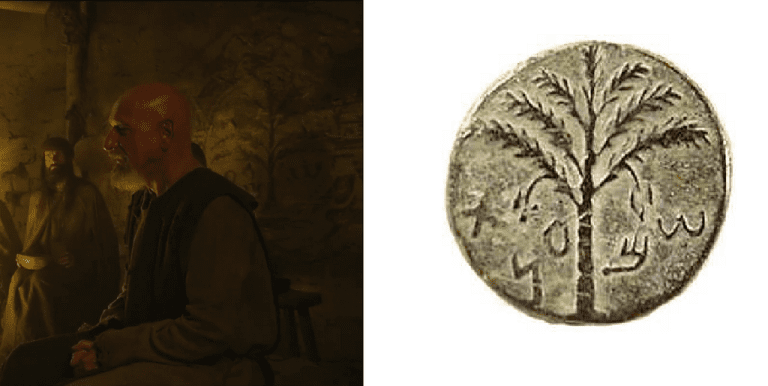 This would not be the first anachronism in this film that we’ve known about.

The trailer has already made it abundantly clear that the Egyptians of this film will lead cavalry charges into battle, which the Egyptians of that era would not have done, partly because their horses were not big enough to carry armoured men.

And then there’s the whole kerfuffle over the ethnicity of the actors.

One other issue has been nagging at the back of my mind. In the video interview below — which I originally posted two weeks ago — Ben Kingsley says that his character, Nun, tells Moses “that he’s Jewish . . . that he’s not Egyptian”:

Strictly speaking, though, “Jewish” is a later term and doesn’t really belong in the story of Moses, either. It, too, would be an anachronism if the movie used it.

The people led by Moses were called “Israelites” or “Hebrews” in the Bible. They consisted of twelve or thirteen tribes, depending on how you count them, and they eventually settled in the Promised Land and formed a nation known as Israel.

A few hundred years after the Exodus, that nation split into two separate kingdoms: the northern kingdom kept the name Israel and most of the tribes, while the southern kingdom was named Judah after the tribe that its royal family came from.

The northern kingdom was eventually decimated by the Assyrians and sent into an exile from which it never returned, hence you sometimes hear about “the lost tribes of Israel.” Over a century later, the southern kingdom was sent into exile too by the Babylonians, but it was then allowed to return home when the Persians conquered Babylon a few decades later. And it is in the books from this period — Daniel, Ezra, Nehemiah and so on — that the people of Judah are first referred to as “Jews”.

So when Moses meets Nun, neither of those characters are “Jewish” in the strictest, most historical sense of the word. Moses is a Levite, and Nun is an Ephraimite.

Will the movie make the mistake of calling these characters “Jewish”? I would hope not, but given all the other anachronisms here, you never know.

One last thought: If the movie has put an engraving from the Bar Kokhba revolt on the wall of the Hebrew scholars’ dwelling, then it seems like the Hebrews of this movie, rather than passively cry out to God for deliverance, may have already begun to form a resistance movement with its own leadership, which Moses then chooses to affiliate himself with (and which, perhaps, tries to use Moses for its own purposes).

If I’m correct about that, then this could suggest a very different dynamic between Moses and the other Hebrews than we have seen in other Moses movies.

September 10, 2014
Check out the Exodus locations in a new featurette
Next Post

September 11, 2014 Morgan Freeman to play an Arab sheikh in Ben-Hur?
Recent Comments
0 | Leave a Comment
""AD" stands for "Anno Domini", a Latin expression meaning "In the Year of Our Lord".So ..."
Peter T Chattaway The Chosen — season one, episode ..."
"Why does it say at the start of episode 3 that it takes place 26 ..."
Desiree Chamberlain The Chosen — season one, episode ..."
"What about Hellboy, The Grudge, Ghoulies, and Anaconda?"
45th Spiderbob Group VGCP When R-rated franchises go PG-13 …
"Not yet, but I might do something like that once Season 2 is complete."
Peter T Chattaway The Chosen — season one scripture ..."
Browse Our Archives
get the latest from
FilmChat
Sign up for our newsletter
POPULAR AT PATHEOS Entertainment
1